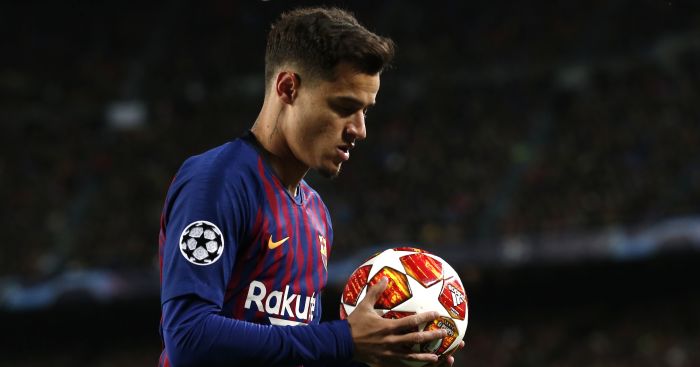 Barcelona are ready to consider offers of €80million for Philippe Coutinho, according to reports.

The Brazilian has been linked heavily with a move back to the Premier League with recent reports suggesting he ‘issued a come-and-get-me plea to Manchester United’.

Liverpool and Chelsea have also been credited with some interest in Coutinho, while Paris Saint-Germain are the main European giants that have been linked with his services.

And Goal claims that Barcelona are now ‘ready to listen to offers’ for the 26-year-old with a move to PSG ‘the most plausible option’.

The report adds that any transfer to the Red Devils ‘does not seem likely’ with Coutinho having concerns about moving back to England after his family failed to fully settle during his spell at Liverpool.

Goal‘s claims fit with reports in the Independent that United will ‘prioritise’ Jadon Sancho with the club not needing a player in Coutinho’s position.

And the report in Goal continues by saying that the Catalan giants would be ‘willing to discuss offers of in excess of €80m’ with any interested parties.

They also understand that Coutinho didn’t want to leave the Camp Nou in January as he wanted to prove he could cut it at Barcelona.

However, he has failed to convince boss Ernesto Valverde that he fits into his plans and ‘consider his future once again’.