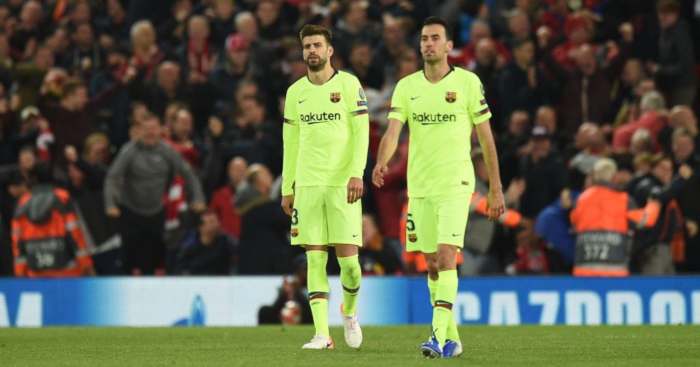 Barcelona were subjected to “the biggest ridicule in history”, according to the Spanish media, as Liverpool left the Catalans “blushing” with a remarkable 4-0 Champions League comeback win at Anfield.

The Catalan daily Sport was among the many newspapers to hark back to last season’s capitulation against Roma, where a 4-1 first-leg lead was scrubbed out in the Italian capital – “just as in Rome, the team did not know how to protect their advantage and the fourth goal demonstrated that”.

That late strike, Origi turning home Trent Alexander-Arnold’s clever corner while the Barca defence inexplicably stood off, was a cause for much consternation back in Catalonia.

An editorial in Catalan-language daily L’Esportiu de Catalunyu bemoaned an “unforgivable” goal that followed “a lack of concentration unworthy of any professional team, not even of a youth team”.

Player ratings handed out to the members of the Blaugrana rearguard and goalkeeper Marc-Andre Ter Stegen in Sport were capped at three out of 10. Ter Stegen was “clueless, Gerard Pique “under assault”, Clement Lenglet “unsafe” and veteran left-back Jordi Alba “erratic”.

Midfielder Ivan Rakitic and former Reds forward Philippe Coutinho were awarded zero marks, with the Brazilian hailed as “a danger to the team itself” in a performance where “he did nothing right”.

Only Lionel Messi, the two-goal star of the first leg, and Chilean schemer Arturo Vidal emerged with any credit, receiving marks of five for “understanding Anfield” and “trying the most”, respectively.

However, a poll hosted on Sport’s website asked, ‘Who is responsible for the latest Barca debacle in the Champions League?’ – and boss Valverde led the way with over 60 per cent on Wednesday morning.

National sports daily AS feels the 55-year-old, who has almost completed two years of service at the Nou Camp, is now “right in the cross hairs”. He stands accused of “betraying the Blaugrana DNA that was based on possession and control of the game” and “faces external pressure to return to that”.

L’Esportiu said Valverde and his team “have not learned anything” from Rome – “it seemed impossible but it happened again”.

The consensus is clear – such an “historic failure” is expected to bring “consequences for everyone”.