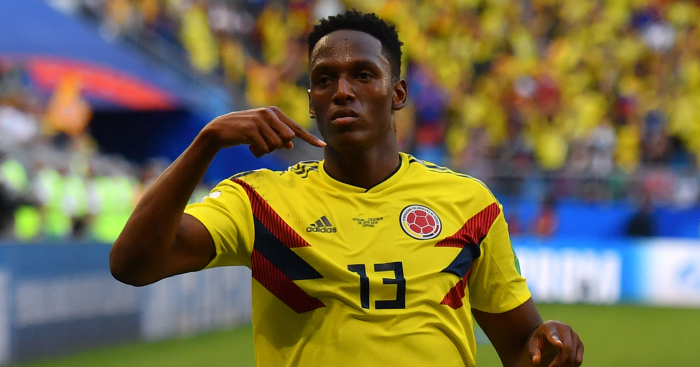 Yerry Mina has offered Everton and Liverpool hope in their attempts to prise him from Barcelona.

Mina has emerged as one of the brightest central defensive talents in world football this summer.

The Colombian enjoyed a fantastic World Cup, a timely boost after his club career stalled following a move from Palmeiras to Barcelona in January.

Everton have been linked with an ambitious bid as part of a double raid on Barca, while Liverpool have also been mentioned.

Mina has offered both a surprise boost by suggesting he wants to join a club with “less pressure”.

“I want to play for a team where there is less pressure and where I can have minutes,” he told ESPN FC.

“I will always try to do my best for me, for my club and I hope that wherever I end up, whether it is at Barcelona or whether I have to leave, I will do it in the best way, but for the moment I am happy.

“It is tough to watch your teammates and see the matches on TV, it was a difficult moment that I don’t wish on any player.

“There were very difficult moments that were very sad for me because I was really not doing well. There were moments when I thought everything was going to turn out as I had imagined, but it wasn’t like that.

“I felt moments everything came crashing down upon me, I felt that nothing was going right, I couldn’t even pass the ball right, or train, I just felt like nothing went right.”