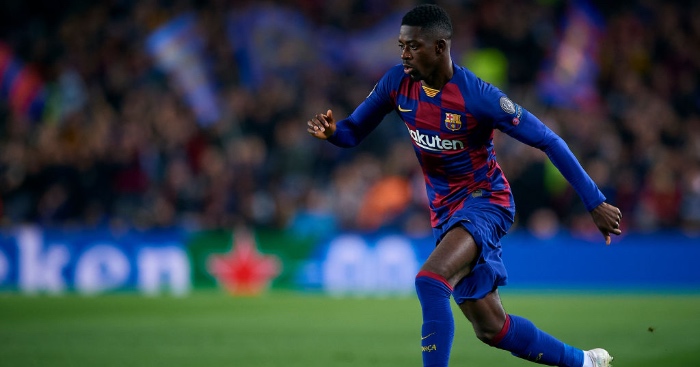 Spanish giants Barcelona are reportedly furious with Man Utd target Ousmane Dembele over his conduct during the recent transfer window.

Dembele was linked with a move to Old Trafford as an alternative for Dortmund’s Jadon Sancho. Rumours intensified on deadline day as Dembele missed training with his teammates.

But neither transfer materialised after Dembele decided he wanted to remain in Spain and Dortmund rejected all offers for Sancho.

According to Spanish source AS (via the Daily Mirror), Barcelona have been angered by the player’s actions as they wanted to sell him to make up transfer funds.

The report states that Barca officials aimed to sell the Frenchman to free up money for their pursuit of Lyon’s Memphis Depay.

However, Dembele apparently refused to leave the club as he aims to force his way back into the first team.

This is despite his talks with Barca manager Ronald Koeman, who told the player he is seventh in the pecking order going forward.

Even club youngsters Francisco Trincao and Pedri are deemed to be ahead of Dembele in the squad.

It’s unclear what this means for United’s pursuit of the player. They could still look to sign him next year if his time at Barca is up.

A transfer would depend on Dortmund’s willingness to sell their prized asset Sancho. The winger is one of the most valuable players in Europe right now and could fetch a huge sum.

Dembele has had a poor time in Spain since moving from Dortmund in 2017. In three years he’s featured just 52 times in La Liga, scoring 12 goals.

Should Barca wish to sell the player, they will want to recoup a decent amount of the reported £117 million they paid for him. Back then it looked like they had signed one of the best young players in the world, but now his future is less certain.