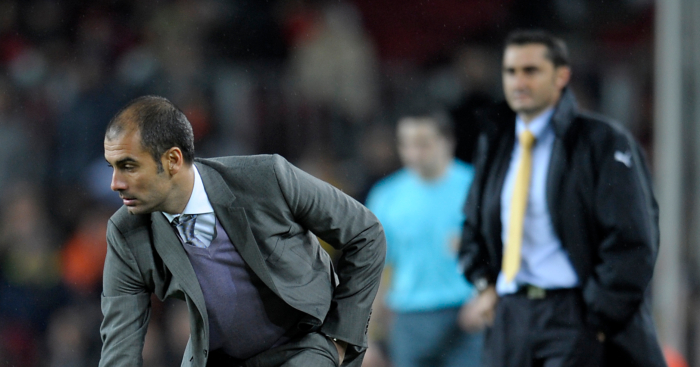 Ernesto Valverde has given Pep Guardiola and Thomas Tuchel stern tellings off for talking to Frenkie de Jong.

Barcelona boss Valverde secured the much sought-after signature of De Jong earlier this week, with the Catalan club announcing that he will join from Ajax in the summer for £74.5m.

Manchester City insisted that wages were an obstacle, with Guardiola seemingly confirming that on Friday.

“The transfer market, the salaries, increases a lot,” he said. “I think we try to keep the harmony in the locker room with the wages.

“When you have no balance with that then there is always a problem with the mood in the locker room. One of the good things that City have done is keeping that balance.”

But Valverde took exception after De Jong revealed he had spoken with both City and PSG.

“I spoke to PSG, yes,” the Dutch midfielder told NOS. “I rang Maxwell to tell him I was not joining them and my agent informed PSG.

“I also spoke with Guardiola about a move to Man City.”

Valverde was far from happy.

“Talking to a player who is under contract with another team is something that can’t be done,” he said.

“You can’t talk to a player who is under contract and that’s something that isn’t in my personal code but suffice to say, everyone has their own way of acting.

“If I do it, I won’t say it. If the player says it then it is his problem.