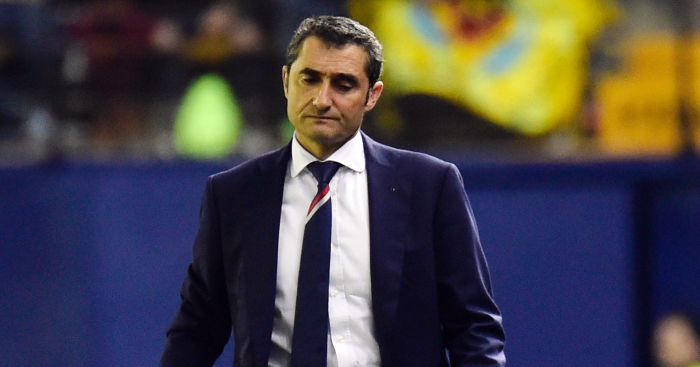 Athletic Bilbao have announced that coach Ernesto Valverde, who has been heavily linked with a move to Barcelona, is leaving the club.

Valverde is believed to be the front-runner to replace Luis Enrique at the Nou Camp, with the Catalan giants set to reveal who their new coach is next Monday.

The chances of that being Valverde, a former Barca player, increased on Tuesday night with Athletic confirming the 53-year-old will not be in charge of the Basque outfit next season.

A brief club statement read: “Ernesto Valverde will not continue as coach of the first team of Athletic Club in the 2017/18 campaign.

“The coach, accompanied by president Josu Urrutia, will hold a press conference on Wednesday, May 24 at 1200 (local time) at San Mames.”

Valverde, who helped Barca win the UEFA Cup Winners’ Cup and Copa del Rey during his two-year spell at the club, has impressed since taking charge of Athletic for a second time in 2013.

He led the club to four successive top-seven finishes, a Copa del Rey final and the quarter-finals of the Europa League.

The former Espanyol, Olympiacos, Villarreal and Valencia boss also helped Athletic lift their first silverware in three decades when he masterminded a 5-1 aggregate defeat of Barca to win the 2015 Spanish Super Cup.

Barca will unveil their new boss next week, with Enrique leaving the post following this weekend’s Copa del Rey final against Alaves.

Former player Enrique, 47, took charge in 2014 and has so far led Barca to eight titles, including back-to-back league and cup doubles in his first two years as well as the 2015 Champions League.