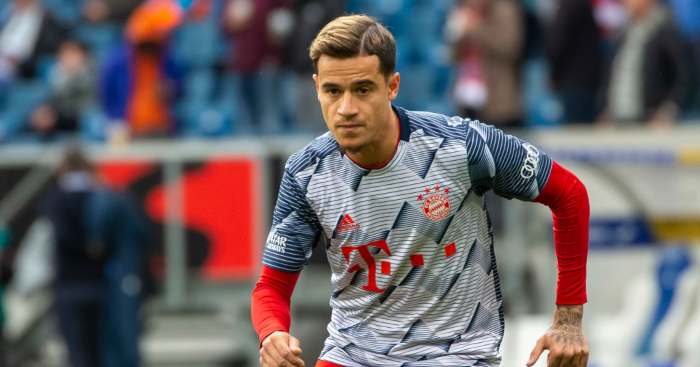 Barcelona are reportedly willing to pay part of Philippe Coutinho’s wages for him to move back to England or stay at Bayern Munich.

Coutinho, who became the Premier League’s record transfer export when he moved from Liverpool to Barca for £142m in January 2018, will be allowed to leave the Nou Camp when the season finishes – having spent the campaign in the Bundesliga on loan with Bayern.

The report in the Daily Telegraph states that Barca accept the Brazilian’s wages, worth more than £200,000-a-week, ‘will be difficult for a club to pay as they assess the financial impact of coronavirus on the football’, so they are ‘considering a compromise to cover his salary’.

Coutinho, 28, will be allowed out again on loan following his year in Germany, although the Catalan giants would also be willing to accept a swap deal or transfer, for the right price.

Both Chelsea and Tottenham have been strongly tipped to move for the former Reds star, particularly since his price tag is believed to have dropped below £50m, while Newastle have also been credited with an interest – if their Saudi takeover goes through.

Barca boss Quique Setien is still said to be a fan of the Brazilian attacker and would be happy to welcome him back into the squad, but the club’s hierarchy would prefer to offload him – especially following the financial impliactions from the coronavirus pandemic.

Indeed, the LaLiga giants have reportedly cut Coutinho’s asking price to a bargain £44.5m to get him off their books – with Chelsea and Spurs already enquiring about bringing in the playmaker this summer.