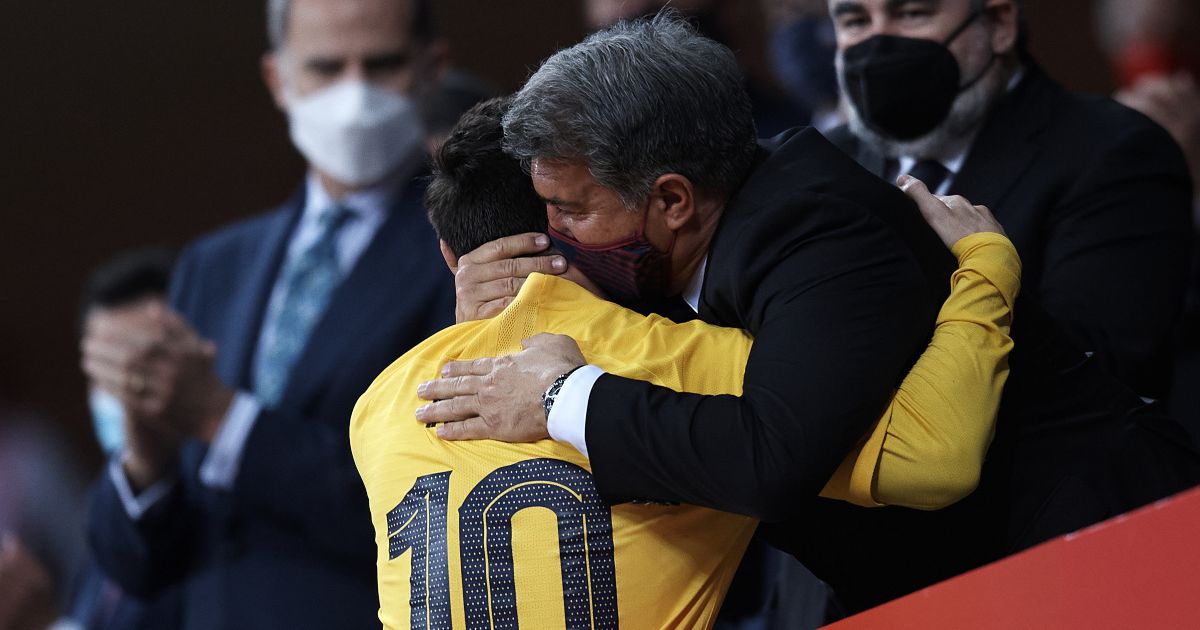 Barcelona president Joan Laporta has explained in more detail why the club had to let Lionel Messi leave the club this summer.

The lowering of the salary cap in Spain has negatively impacted Barcelona, as well as other clubs, in the wake of the financial effect of the Covid-19 pandemic.

The Catalan giants had reached an agreement in principle with Messi this summer but they were unable to formalise his new contract as they exceeded their salary levels.

Manchester City and Paris Saint-Germain are now reportedly at the front of the queue to sign Messi with Pep Guardiola’s side favourites.

In a press conference on Friday, Laporta insisted that Barcelona did all they could to sign Messi but it wasn’t good enough.

Laporta said: “I’m here to explain the situation we have reached in the negotiations with Leo Messi. First of all I would like to say that the inheritance we have received is dreadful.

“That means that the losses are a lot more elevated than what we had expected. What we are spending is a lot more than we expected and the current contracts means we have this salary mass of great magnitude. This is all tied to fair play and it means we couldn’t fit in the first contract we had agreed to with Leo Messi.”

On the contract, he added: “Leo Messi wanted to stay at Barcelona, he had an agreement to stay at Barca and we wanted Leo to stay. I want to thank Leo’s camp and all people involved in the negotiations. Unfortunately, because of La Liga rules we can’t proceed.

“I’m sad but we did everything to keep Leo and he was prepared to stay at Barcelona, it was agreed. A new era starts now without Lionel Messi, we’ll be thankful to Leo.”

Joan Laporta: “Negotiations with Leo Messi have ENDED. We can’t register Messi because of La Liga rules, they’re not flexible with us on salary limit. We had an agreement with Leo but we can’t register him.

Leo will now look at OTHER OPTIONS, we had a deadline”. 🚨 #Messi #FCB pic.twitter.com/jvYtkVjOej

On the legend’s impact at the club, Laporta continued: “Leo’s legacy is excellent. He has made history and he is the player with the most success in the history of the club. He has been the reference of an era which has been splendid, and the best in the club’s history, up until today.

“I hope we can overcome this situation and a new era starts now. There will be a before and after Leo, as there have been other great players at Barca.

“Leo Messi goes along those lines. He has given us lots of joy and lots of sporting success. There are lots of images which will go down in history and we need to be eternally thankful to him.”

On whether there could be a change in circumstances that would see Messi re-sign, Laporta said: “Chances to change the situation and re-sign Messi? I don’t want to give fake hopes. We had a deadline because La Liga is starting soon… now Messi can look at other options.

“We had an agreement with Messi to sign a five-years contract but paying him two years salary. Leo agreed the contract, it was accepted. We were convinced it was a good agreement for Financial Fair Play but… it wasn’t allowed by La Liga.”