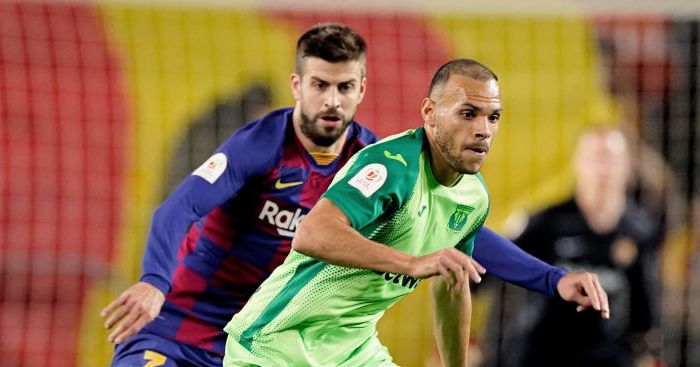 It’s a well-established fact that the balance of La Liga is heavily weighted in favour of the big clubs.

The TV money distribution model – which had allowed Real Madrid and Barcelona to negotiate their own television rights – was reformed in 2015, but even the new centralised model massively benefits the big two.

And now, as if to underline the enormous chasm between the haves and the have-nots, Barcelona are set to take advantage of a ludicrous La Liga rule at the expense of lowly Leganés.

Despite a long-term injury to Luis Suárez, Barcelona failed to sign a striker in the January transfer window. They were close to signing Rodrigo from Valencia, and later Cédric Bakumbu of Beijing Guoan, but the plug was pulled on both deals for reasons unknown.

Manager Quique Setién was talking up Ousmane Dembélé as the answer to their striker shortage, but the French winger picked up a hamstring injury in training a few days after the January transfer window closed.

It was then that Barça hit upon a La Liga loophole that would allow them to bring in a player under ’emergency’ rules. If they could satisfy the authorities that Dembélé would be out for a minimum of five months, they could be granted permission to make an extraordinary signing from another Spanish team.

There were reports that Barcelona had overstated the severity of Dembélé’s injury in order to gain permission – and Barça’s players seemed to labour the point by lining up in shirts bearing the Frenchman’s name ahead of Saturday’s game against Getafe – but La Liga’s medical panel was satisfied that he would face a six-month lay-off.

La Liga gave Barça the green light, and the Catalan side are now allowed to unregister Dembélé and replace him with a new signing.

It’s not exactly in the spirit of the law, which was designed to allow clubs to bring in free agents and the like should there be an injury crisis, but La Liga was never likely to stand in the way of one of their prized assets.

The fact that La Liga players are required to have release clauses means that clubs are powerless to prevent their players leaving, provided Barça meet the minimum price.

They were linked with Getafe’s Ángel Rodríguez, Roger Martí of Levante and Lucas Pérez of Alavés among many others, but it appears that they will trigger the €20m release fee to spring Martin Braithwaite of Leganés from his contract.

The Madrid-based side – who are second from bottom and already lost striker Youssef En-Nesyri to Sevilla in the January transfer window – now have no choice but to sell their best player, and are unable to replace him until the end of the season, by which time they may well already have been relegated.

They will have €20m in the bank, but compared to the loss of earnings from dropping out of the top flight, it is small beer.

Ex-Middlesbrough man Braithwaite has scored a third of his side’s goals this season, and was a vital part of Los Pepineros’ fight for survival. At Barcelona, he will deputise for Antoine Griezmann, Lionel Messi and Ansu Fati, and will presumably be tossed aside at the end of the season when a shinier bauble comes along.

Braithwaite is a decent if unspectacular player, but he is of far greater value to Leganés than to Barcelona.

Now, Lega are being punished because of Barcelona’s ineptitude.

Not only did Barcelona fail to sign a forward in the transfer window, they also let two go in the shape of Carles Pérez and Abel Ruiz, who went to Roma and Braga respectively. Now, the world’s richest club have had to go cap in hand to La Liga to assuage a problem of their own making, which will now be solved at the expense of a much smaller, far needier club.

It’s not the first time a big club has been allowed to ride roughshod over lesser lights, and it won’t be the last. But this blatant inequality should be a source of shame to the league, and Barcelona should have the self-awareness to see that this behaviour is unbecoming of a club of their stature.

It could be that Braithwaite makes a difference for Barcelona, helping them to win another league title for them to toss on the pile. But for Leganés, he could have been the difference between top-flight survival, with all the financial security it brings, and a descent back down to square one.