Pierre-Emerick Aubameyang is 'on the brink of agreeing a new three-year contract' at Arsenal... 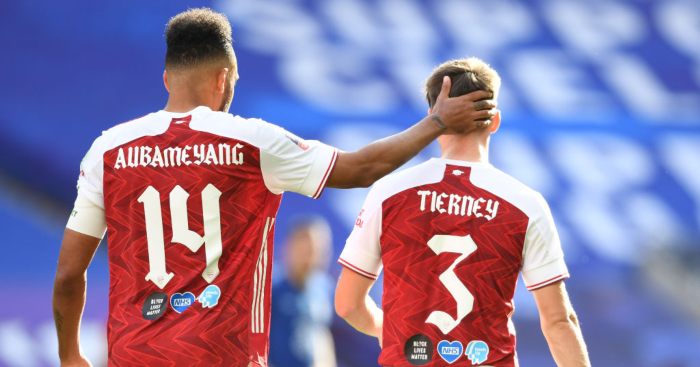 Pierre-Emerick Aubameyang will sign a new deal at Arsenal unless Barcelona come in with an acceptable offer, according to a report.

The Gabon international has entered the last year of his contract at the Emirates Stadium and there has been reported interest from the likes of Spanish side Barcelona.

His future remains up in the air at Arsenal but there seems to have been a lot of progress towards a new deal since his double strike against Chelsea helped the Gunners win the FA Cup last weekend.

The Daily Telegraph reported on Thursday that Aubameyang is ‘on the brink of agreeing a new three-year contract’ at Arsenal in a ‘huge boost to the club and head coach Mikel Arteta’.

The Gunners ‘are now drawing up the final proposal for Aubameyang to sign’ after ‘verbal promises were made’ in the last round of negotiations.

The report added: ‘As long as Aubameyang, his representatives and his lawyers do not find any problems in the contract or differences from what has been discussed, then it is expected he will sign the contract and commit himself to the Emirates.’

And now journalist Fabrizio Romano claims that Arsenal are ‘confident’ that Aubameyang will sign, with Barcelona the only threat to a deal.

Willian approved also by Arteta. Just a matter of time and he’ll until 2023 – confirmed.
Thomas: Atlético told again… release clause (€50M) or he’ll stay.
Aubameyang contract extension: Arsenal are “confident”, if Barça will not come back for Auba he’s going to stay.⚪️🔴 #AFC