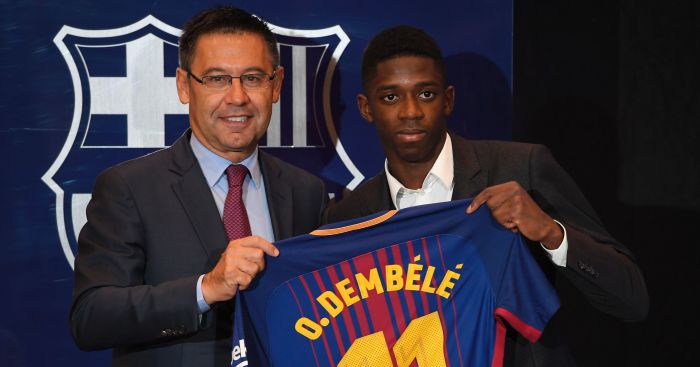 Barcelona president Josep Maria Bartomeu has insisted that Ousmane Dembele will not be leaving the club this summer, despite links with Liverpool.

The attacker only joined the La Liga giants last summer when he was bought for £135million, initially as Neymar’s replacement.

Jurgen Klopp was asked about reported interest in Dembele after Liverpool’s defeat by Chelsea: “Is he on the market? Now I’m interested.”

Bartomeu however has quashed any chance of a summer exit.

“The option of selling him is not on the table. We are finishing the season and then there will be meetings,” he told Catalan radio station RAC 1 .

“He’s an investment for the future. He is very young and we expect a lot from him.”

Barcelona will not be returning for Neymar this summer however, amid reports he is unsettled at PSG, with Bartomeu once again hitting out at the Brazilian for the way he went about getting a move.

“I was surprised how Neymar left. I think that when he told us he was going, he had long since decided it.

“On the day there is a trial about the renewal premium, all this will come out.

“Neymar won’t return to Barca. We have new projects and there is no interest.”