Home Barcelona Barcelona and Ronald Koeman are a disastrous match 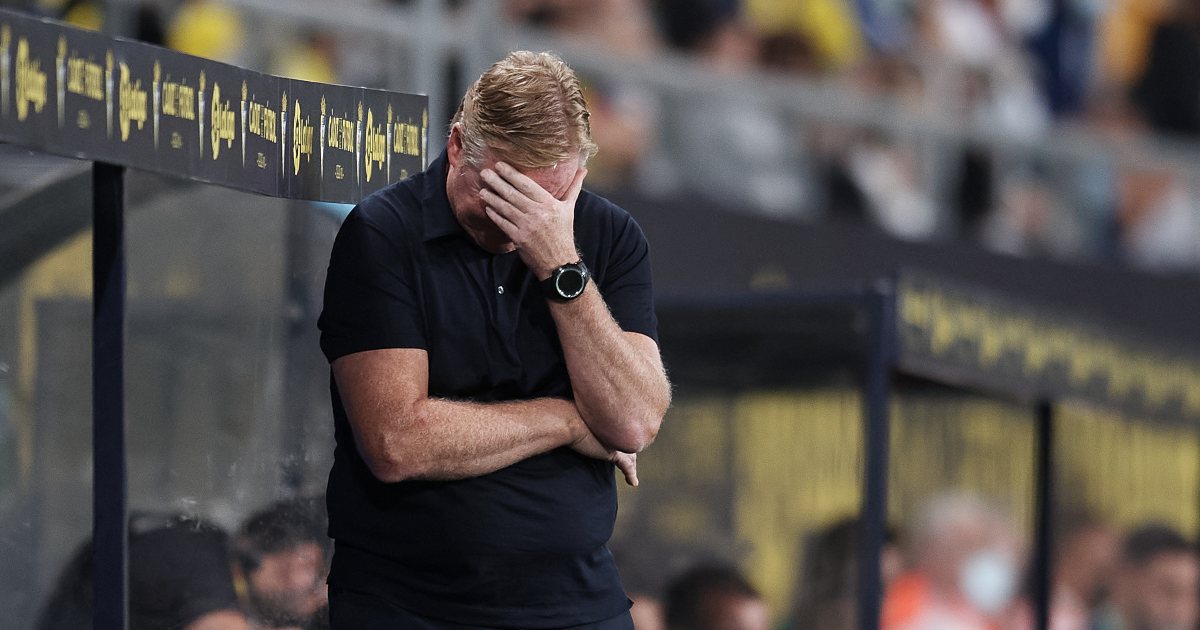 If there was one line Ronald Koeman could have used to to simplify the discourse surrounding the increasingly palpable tension at Barcelona, particularly centring around his position as coach, it was this: “When you look at the list (of players I have to pick from), what am I supposed to do? Play tiki-tiki?”

There is so much wrong there; so much to unpack. Not that he needed it, given the nature in which both he and club president Joan Laporta have been washing their dirty linen in public since Laporta returned for his second spell in March, but Koeman read his own P45 out loud. The only reason he is still at Camp Nou is the same reason Lionel Messi isn’t: they don’t have the money to make a change.

That Koeman was ever employed is evidence of a fall from grace with a nasty bump. For a legendary ex-Barcelona player – scorer of the winning goal at Wembley in the ’92 European Cup final under Johan Cruyff no less – he hasn’t displayed the coaching nous, and more alarmingly, attitude to succeed in the role he always called his dream. Josep Maria Bartomeu hired him and never had too much time for Cruyff, the ‘father’ of the Barcelona ideology Laporta put centre stage between 2003 and 2010.

Everybody knows the term tiki-taka, synonymous with the Laporta experiment, a homage to Cruyff which yielded three La Liga titles and a Champions League and ensured a dynasty would last long after he’d gone. To get the name wrong is nothing major in itself, but it was said with such disdain and menace that it was hard to ignore.

Really, though, the issue lies in the answer to Koeman’s seemingly rhetorical question. Yes, he should be playing that way; at Barcelona, principles are sacred, and the fact they have slipped is almost directly linked to their spectacular decline. Laporta is far from perfect – his handling of the Messi saga proved as much – but when the socios voted en masse to re-elect him as captain of a desperate ship, it was evidence that they wanted their purity back; success was a by-product of the principles they once stuck to. The logic is sound: return to the principles and, one day, maybe, success will follow. They can only hope.

Ernesto Valverde found, even in the Bartomeu era, drifting too far away from that style of play was fatal. Fast-forward to 2021 and Gerard Pique is joining Luuk de Jong up front and some of the tactics would have made Tony Pulis’ Stoke City blush. Results are even worse. There was a Champions League meeting with Bayern Munich on matchday one; it should have been a rare treat, the sort of clash reserved for the semi-finals rather than the group stages. But Bayern almost looked embarrassed at how far ahead they were; it was they who ended Quique Setien’s reign and arguably lit the touch-paper for current events with an 8-2 victory in 2020. This ended 3-0 – less chaotic, no alarm bells ringing at the depths reached, but it was almost worse. There was a quiet acceptance, a humbling sense of new reality and relief when, by the end, it seemed the least bit respectable.

Exaggerations were made around Valverde and even Luis Enrique before him; they dared to play the ball forward more than sideways and felt the wrath of fans and press. Koeman, who has appeared little more than the anti-Cruyff at the most delicate moment of crisis, has abandoned everything and looked to shift blame. On a personal note, his long-winded, inevitable final chapter has been almost textbook. He has nothing to do with the wider troubles, but now is the time for unity and understanding. His job, theoretically, should be easier with the lifting of major expectation, but sympathy is sapping away. How long until his reputation follows?

Hope arrived on Sunday afternoon. There was a rudimentary 3-0 win over Levante, the type of result it is perhaps natural to take for granted. But Koeman and Laporta can’t afford to do that, so it was a bright spark; Ansu Fati’s late cameo, his first since returning from injury and first in the number 10 shirt, was a glimpse of a possible future. He scored a goal reminiscent of Ronaldinho, picking the ball up in the centre of the pitch and driving into space, committing defenders before firing into the net. Serenaded by Camp Nou at the end of the game, Ansu immediately said the club were targeting every trophy in the book. But the nature of the world Koeman lives in is not forgiving enough for one result to turn the tide.

In a dream world, Xavi Hernandez would take over next. Nostalgia is a point in his column, but there is an argument for natural progression. Barcelona are a club who like the romantic idea of a succession plan, with players who replace one another in order, developed with the fabric of their ideals. Pep Guardiola was expected to be replaced by Xavi, who in turn was to be usurped by Andres Iniesta, followed by Cesc Fabregas and finally Thiago Alcántara. Footballers don’t develop at the same rate, so it never quite worked out that way, but in the same sense, Guardiola was hired by Laporta in 2008 because he understood the ideology which was in danger of being lost; Xavi fits the bill for the future for the same reason.

In reality, timing is everything, and Xavi, who currently manages Qatari side Al Saad, would inherit a monumental task for which he isn’t ready. He speaks the same football language as Guardiola, as he said himself, but football isn’t that simple or that kind. Roberto Martinez, the Belgium manager liked by Laporta, is another option.

Koeman is right to a degree; his squad is weak and the problems are mounting beyond his control. But as the figurehead of Barcelona, somebody who played and enjoyed success with the club, he needs to show more understanding. He’s demonstrated he does not and the writing for him is very much on the wall.