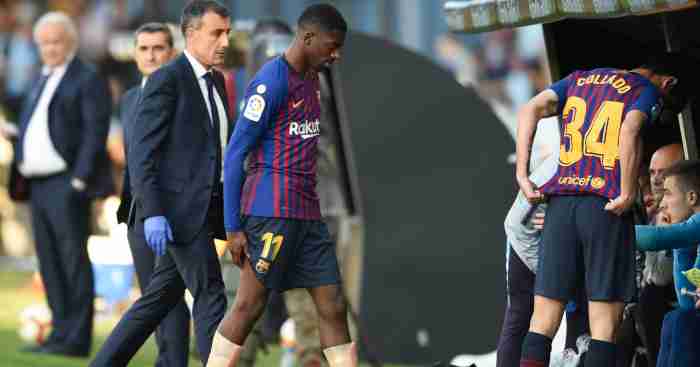 Barcelona manager Ernesto Valverde admits the loss of Ousmane Dembele to a hamstring problem early in the 2-0 defeat at Celta Vigo will be a “major blow” to their end-of-season ambitions.

French forward Dembele, though, lasted less than 10 minutes before being forced off with a hamstring injury.

While the defeat, a first in the league since November, will not in itself be a major issue on the campaign, losing another attacking option could be.

Barcelona confirmed in a statement on the club website Dembele had “suffered a muscular injury in his right hamstring” and was set for further tests on Sunday to establish the full extent of the problem.

“He is an important player for us and it is a major blow with the big games we have coming up,” Valverde told reporters, as quoted by Spanish media outlet Marca.

“I didn’t replace him with Philippe Coutinho as I didn’t want to run any more risks.”

Defender Jean-Clair Todibo also went off during the second half, but Valverde hoped the problem was not serious.

Maxi Gomez finally broke the deadlock in the 67th minute before Iago Aspas wrapped things up with a late penalty, given for handball following a Video Assistant Referee referral.

Celta Vigo move five points clear of the relegation zone to 14th place, while Barca slipped to a first LaLiga defeat since November.

“We dominated the match at moments. Their first goal came and it gave them the option to go on and win the game. We had no answer,” Valverde said.

“We played with a lot of new faces and in the second half we were unable to generate what we needed to score.”