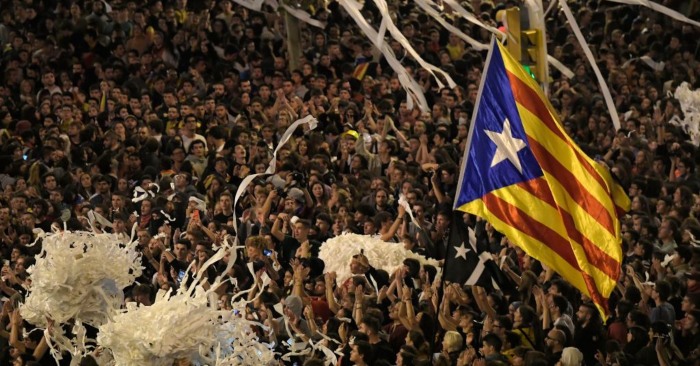 Should sport and politics ever mix?

That eternal question has reared its head once again this week following the reactions of various sporting institutions to the latest escalation of tensions in Catalonia.

Shortly after the sentences against the orchestrators of 2017’s unauthorised independence referendum were passed, FC Barcelona released a statement condemning the rulings, calling for the prisoners to be released and urging dialogue to find a solution.

Soon afterwards, neighbours Espanyol released a statement of their own, seemingly in a pointed reply to Barcelona, saying that as a ‘purely sporting entity’ they couldn’t speak on behalf of their members, and suggesting that the ‘social crisis’ should be sorted through political and legal means.

Barcelona didn’t say anything hugely inflammatory in their statement, but there was a subtext that would definitely have resonated with separatists. By condemning the sentences, they were showing tacit support for the independence movement, while being careful not to say anything overtly pro-independence. The statement left enough room for plausible deniability.

Equally, Barcelona have plenty of ‘remainer’ supporters. They have fans from all over Spain, and Catalonia itself is far from unanimously supportive of independence – indeed, according to polls, more than half the population of the autonomous region would prefer to remain part of Spain. This may form part of the reason why they stop short of publicly declaring their partiality to either side.

But the fact that they felt the need to release a statement at all shows how inextricably linked the club is to the political movement. They are the biggest cultural institution in Catalonia, and their stadium is often a public forum for Catalanism, with pro-independence chants and ‘estelada’ flags in the stands being broadcast throughout Spain and most of the world.

When tens of thousands of people gather in one place, it is normally either for a football match or a political demonstration. When a club has a strong political identity, either explicitly or symbolically, then the lines between the two can become blurred.

Given the current heightened emotions of the separatist section of Barcelona’s support, the game against Real Madrid at Camp Nou a week on Saturday will no doubt be the scene of mass demonstration – if it is allowed to take place.

Real Madrid are often portrayed as the team of the state, of centralism and the establishment. The reality is much more nuanced than that, but for various historical and social reasons, Barcelona v Real Madrid is a bitter affair at the best of times. In the current climate, the hostility could easily spread into violence. A huge demonstration is planned in Barcelona for that day anyway, and the police will surely have their hands full with other matters.

La Liga, the RFEF and the Ministry for Sport want the game to be moved to a different venue or different date to avoid any flashpoint. It was initially suggested that the fixture be switched to the Bernabéu, but both clubs rejected the proposal. The ‘Tsunami Democràtic’ organisation that has been behind many of the protests in Catalonia this week indicated that they would bring their demonstration to Madrid if the game was moved there in any case. It now looks as though the game will be staged at Camp Nou in December, but whether it will be deemed safe to do so then remains to be seen.

A separatist movement planning to use a football game as a venue for demonstration, and a government department intervening to try and prevent it. The question shouldn’t be about whether sport and politics should mix, it should be about whether they can ever be separated.

The debate is a pointless one. We are powerless to prevent politics entering sport and vice versa. Both are so all-encompassing in society that one will inevitably leak into the other, and any attempt to keep them separate is an exercise in futility, particularly in the football-mad fraying patchwork quilt that is Spain.