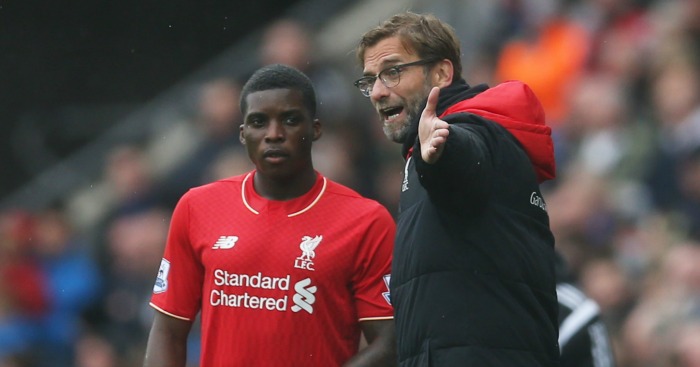 One teenager from every Premier League club who could become a star. Remember the name…

After Reine-Adelaide's promotion 19/33 (57%) of the Arsenal first-team have been with the club from under 23. pic.twitter.com/set6wqNj7w

BURNLEY: Aiden O’Neill (18)
Described as “terrific” by Sean Dyche for his performances in pre-season, but the manager’s admission that the Premier League is an ‘unforgiving place’ for youngsters means we are unlikely to see him or Josh Ginnelly too often outside the League Cup.

CHELSEA: Ola Aina (19)
Currently Chelsea’s first-choice right-back with Branislav Ivanovic injured, he has been excellent in pre-season. Even Jose Mourinho said he was “a boy with lots of potential”. Not that he used him.

CRYSTAL PALACE: Luke Dreher (17)
With no player younger under 23 starting a Premier League game for Palace last season, it could be a long old haul for Dreher, but he is Palace’s Under-18 Player of the Year and he did at least make the bench for a clash with Manchester United last season.

EVERTON: Tom Davies (18)
Played an impressive 90 minutes against Norwich on the final day of last season, has been involved throughout pre-season and is on the verge of signing a new long-term deal. The boy is good.

HULL CITY: Josh Tymon (17)
You may remember him as the 16-year-old who faced Arsenal in the FA Cup as a left wing-back and reportedly attracted the admiring eyes of Arsenal and Tottenham. Hull’s chronic lack of players may mean that he actually plays this season.

LEICESTER CITY: Ben Chilwell (19)
You may have heard of him. Liverpool wanted him but Chilwell has instead signed a new contract with the Foxes. Phenomenal on loan at Huddersfield last season, he is destined for a long fight with Luke Shaw to be England’s left-back for the next ten years.

LIVERPOOL: Sheyi Ojo (19)
“Sheyi is a wonderful player that’s for sure and his future is 100 per cent at Liverpool,” says Jurgen Klopp, who is yet to decide whether Ojo – who scored against Roma in a pre-season friendly this week – will go out on loan again this season. He looks a bit fancy.

MANCHESTER CITY: Kelechi Iheanacho (19)
Astonishingly still a teenager despite scoring eight Premier League goals in less than 800 minutes of football. Will he get a game under Pep Guardiola? We really do hope so.

MANCHESTER UNITED: Marcus Rashford (18)
Only five Premier League goals in 861 minutes. That’s poor from the boy Rashford, who made his Manchester United debut in February and was at Euro 2016 in June. That still sounds mental now.

Marcus Rashford made our third goal on Saturday with a brilliant run into the penalty area. #MUFC https://t.co/q700YVABfk

MIDDLESBROUGH: Dael Fry (18)
Centre-back who played seven Championship games last season and has spent the summer at the European Under-19 Championship. Boss Aitor Karanka has compared him to Koke and Thiago Alcantara in terms of teenage promise. High praise indeed.

SOUTHAMPTON: Olufela Olomola (18)
Only signed his first professional contract in May, and yet was on the bench for the Premier League games against Sunderland in March. The striker joined Southampton in 2014 after being released by Arsenal.

STOKE CITY: Ramadan Sobhi (19)
One of only two summer signings at Stoke, Sobhi is regarded as one of the brightest prospects in African football. Judging by the nickname ‘Ramadona’, we should expect skills, goals and a propensity to balloon in weight.

SUNDERLAND: Ethan Robson (19)
There is not a single member of David Moyes’ squad under the age of 20, so we had to dig into the academy setup. Central midfielder Robson was given a new two-year deal in April, is two-footed and has been showered with lovely compliments. F**k it, he’ll do.

SWANSEA CITY: Daniel James (18)
Signed for a weirdly specific fee of £72,000 from Hull City in 2014 when only 16, James is yet to make a first-team appearance, sitting on the bench during the FA Cup defeat to Oxford United in January. James is a regular for Wales’ Under-19 team, and also for Swansea’s Under-21 team. The next step is the biggest.

TOTTENHAM: Marcus Edwards (17)
Some on this list will fall by the wayside, but Edwards will surely not. Every time you watch the midfielder play, he persuades you that we have a star in the making. “It’s fair to pay attention to Marcus Edwards because he’s a very talented player but we have to be careful with all the young players,” says Mauricio Pochettino. “He’s only 17 years old – we need to care for him in a very good way.” He’s in the best possible place.

WATFORD: Jerome Sinclair (19)
Last season, Watford used three players under the age of 25 in the Premier League, and none of them remain at the club. Jerome Sinclair isn’t just lonely as an exciting young player, he’s got his own postcode.

WEST BROM: Jonathan Leko (17)
Lats season, Leko became the first teenager to start a top-flight league game under Tony Pulis. If that isn’t something worth framing and putting on the bedroom wall, I don’t want to know what is.