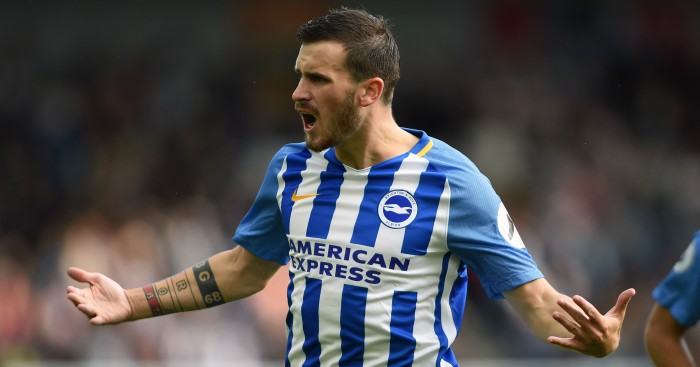 “I was doing a Brighton game recently and we had figures on Pascal Gross, the German guy who plays in midfield.  The statistic was he had created 95 chances for Ingolstadt last season, the most in the Bundesliga. And four assists. How the f*** is that possible?”

Well it’s possible, Graeme Souness, because Pascal Gross is an excellent player, far better than those he played alongside at the now-relegated Ingolstadt. Their ‘star’ striker is and was Dario Lezcano, who once had a particularly good year in the Swiss league but really has achieved little else. For Gross at Ingolstadt, read Gylfi Sigurdsson at Swansea before Fernando Llorente became a thing; set-pieces were delivered, crosses were arrowed, passes were threaded, but still the rewards were negligible. You can lead a horse to water, but you can’t make it drink. Or hit the target with a bullet header.

Brighton were the one Premier League club who looked beyond that headline statistic of four assists; three visits to England and several long conversations with Chris Hughton later, Gross became the £2.55m signing that nobody really noticed. The only Premier League players to create more chances than Gross last season were Christian Eriksen, Kevin De Bruyne and Mesut Ozil, and yet Gross joined the Seagulls for less than a quarter of a Jacob Murphy. There is clearly no German premium.

Now, 11 games into the season, only David Silva and De Bruyne have notched more Premier League assists than Gross, whose haul of five equals the total of all his Brighton teammates. For all the pre-season talk of Anthony Knockaert being the key to Brighton’s survival, their early-season form – they go into the weekend in eighth – can be attributed to three things: The organisation and stability of the central defence, the unexpected effectiveness of Glenn Murray and the creativity of Gross. Without him, Brighton would be trying to survive on a meagre diet of 0-0 draws.

After Brighton’s first three games yielded no goals and just one point, it seemed that Gross would suffer the ignominy of a second consecutive relegation without neutrals ever needing to learn his name. In a functional and forgettable Brighton team, there was little about the German in the No. 10 role that suggested we should have noticed that £2.55m early-summer signing. Clearly struggling with the physicality of the game, he lasted little more than an hour against Leicester.

“It’s different to the Bundesliga because it’s more physical and the referees don’t whistle so often,” he said. “In Germany, it’s easier to get free-kicks and the referees will let more stuff go here. You have to learn fast and get used to the English mentality. That’s what I want to do and I train hard to improve every day.”

And then West Brom happened, and Gross was ‘nothing short of awesome in the second half’. That game brought two goals and the first of those five assists, with Gross growing in impact as Chris Hughton pushed him closer and closer towards Murray. In the last four games they have played almost as a strike partnership and Brighton have been unbeaten. The unheralded No. 10 has clicked with the unlikeliest of Premier League goal heroes.

“He wants to get assists and that suits me. When I make runs, I know he’s always got his head up and is looking for me,” says Murray, who clearly feels blessed to be playing alongside a man who would surely be in the current German squad were they half as desperate as England for creativity. It is certainly impossible to think of another sub-£5m signing who has had a similar impact in the Premier League this season and it now seems extraordinary that he did not have other suitors.

“It looks like they’ve got a player there,” said Jamie Carragher. How the f*** was that possible?