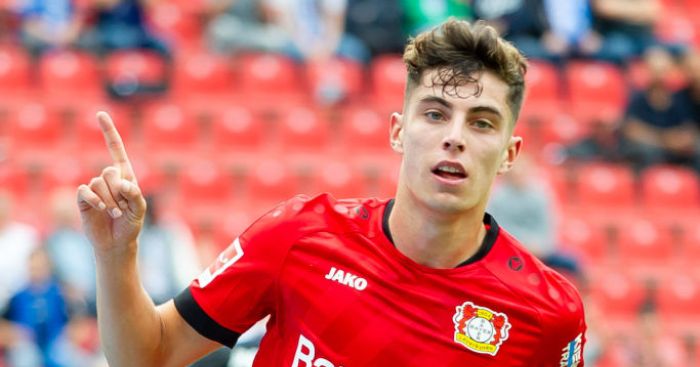 Liverpool and Manchester United have both been linked with four of this sextet, who are the most valuable Under-21 players outside the elite according to transfermarkt…

6) Nicolo Zaniolo (Roma)
Massive debts that are only going to be exacerbated by a) the crippling coronavirus crisis and b) a likely failure to qualify for the Champions League for the second consecutive season, mean that Roma’s most valuable asset – 20-year-old attacking midfielder Nicolo Zaniolo – will probably be sold this summer for a sum closer to £50m than the £70m they might have demanded last summer.

Liverpool and Manchester United have both been heavily linked with Zaniolo, who can play as either a No. 10 or a right-winger. He was previously famous for making his Roma debut in a chastening 3-0 defeat against Real Madrid in the Champions League (and then for joining Moise Kean in the immaturity that got him ejected from the Italy Under-21 squad) but all that infamy could disappear if he joins Liverpool or Manchester United this summer.

Serie A’s biggest talent. I’d be the happiest man alive if we manage to get this talented player.

5) Ferran Torres (Valencia)
Oft-cited as a cheaper alternative to Jadon Sancho for either Manchester United or Borussia Dortmund, Torres is the 20-year-old winger who has already played 88 games for Valencia. He does have a release clause of around £89m but they might be lucky to get half that figure in what we are contractually obliged to call ‘the current climate’. Particularly as his contract expires in 2021.

The latest links are with Liverpool and former Valencia sporting director Fernando Gomez recently said: “He can perform well in any team and in any league. In England too, of course, at Liverpool or any other team. Klopp’s system fits him and he is mentally very strong to cope with pressure and demands.”

Sky Sports pundit Guillem Balague claimed that Liverpool are keeping a close eye on talented Valencia youngster Ferran Torres . Torres was the best player for Spain at U-19 level. He is a right winger, but can operate anywhere along the front-line.

4) Gianluigi Donnarumma (AC Milan)
If you are forced to sell players because of spiralling losses, then the best place to start is your 21-year-old goalkeeper who is incredibly reluctant to commit his future to the club. It is incredible that he is still only 21; he seems to have been on the verge of leaving the Milan club for the best part of a decade.

The latest club to be heavily linked are Chelsea, who are ready to give up on their record-breaking £71m keeper Kepa after two underwhelming and occasionally disastrous years, but they would need to find a buyer before they pledge to spend around £45m on Donnarumma.

3) Declan Rice (West Ham)
It’s almost impossible not to laugh at reports that Real Madrid are interested in Declan Rice, but if they believe they can get him for £44m then they might be fooled by his youth (21) and by his England caps (7) that they can land themselves a bargain after previous reports suggested that West Ham would look for around £70m.

The Sun said last month that Rice ‘is the star name up for grabs as West Ham prepare for a huge squad overhaul’ because of the coronavirus and they mentioned that Manchester United, Arsenal and Chelsea were all interested in the midfielder. Quite why Chelsea would be interested in England’s weakest link when they have Billy Gilmour emerging from the Academy is unclear.

Any team that agrees to pay £70m for Declan Rice should be slapped with a 2 year transfer ban. Even in the age of ridiculous fees, that’s an absolute ludicrous amount of money for someone who’s barely worth half of that. Irreversible damage to the transfer market.

2) Houssem Aouar (Lyon)
If you had £44m, would you spend it on Declan Rice or Houssem Aouar, who at the age of 21 has already played two seasons of Champions League football in which he has beaten Manchester City and Juventus among others? File under ‘no-brainer’. But Lyon have missed out on another season among the European elite and now look likely to cash in on a player who will be a target for City, Liverpool, Juventus and PSG, especially at any price below £50m.

City have emerged as the favourites, with Pep Guardiola on record as saying: “Houssem Aouar is a very good player. He is incredible.” Astonishingly, France are so flush with options that he is yet to be capped by his country.

1) Kai Havertz (Bayer Leverkusen)
“He doesn’t play and look unlike a young Michael Ballack believe it or not. He’s got that,” said Ally McCoist this week. That kind of comparison is inevitable when you are a young German goalscoring midfielder playing for Bayer Leverkusen, but Havertz is actually ahead of Ballack’s trajectory with 111 Bundesliga appearances and seven international caps before the age of 21.

The problem for Havertz and Leverkusen is that despite his best efforts, they are still fifth in the Bundesliga table and look likely to miss out on Champions League football. CEO Fernando Carro claims that “market value losses will not be reflected in the transfer fees for top players” but try telling Barcelona or Liverpool that you still want over £90m this summer, freund.

We are still making video. And we have been trying to rank the greatest Premier League teams…