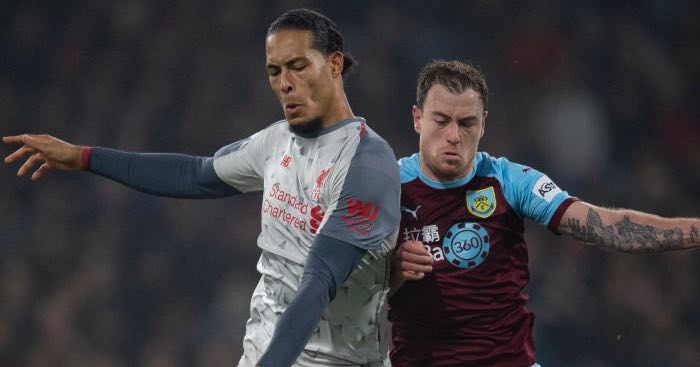 Burnley striker Ashley Barnes is confident Ballon D’Or nominee Virgil Van Dijk will have ‘a tough game’ when they face off at Turf Moor on Saturday.

Barnes has four goals already this season, including a stunner in the 1-1 with Wolves last weekend.

The striker is not often talked about as one of the Premier League’s great strikers, but his tally of 13 goals since the turn of the year is only bettered by Sadio Mane (15) and Sergio Aguero (16).

Barnes’s Big Six record is remarkable. Of his 36 Premier League goals, a third of them have come against Manchester City, Arsenal, United, Spurs, Chelsea and Liverpool.

“I want to come off the pitch knowing that the centre half has had a run for their money and a tough game.

“I believe that I keep getting better each week and each day in training and hopefully that hard work will show in good performances.”

Barnes says he and his teammates know Liverpool pose a huge threat but they are confident they can cause the Champions League winners some problems.

He said: “We go into every game confident, the training is fantastic, the group of lads we have here is probably the best one since I have been here so we are striving and want to finish in the top half.

“We know they are a good side, we don’t need to watch them to know that. We know what they are capable of, but we will go and do our work and see what weaknesses we think we can capitalise on and we will try and do that.”