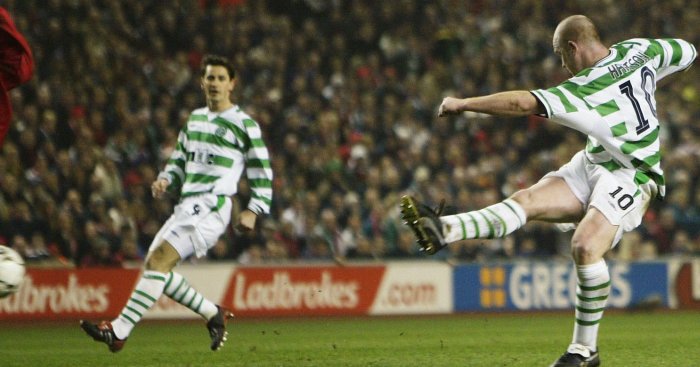 Aberdeen and Burnley’s Europa League clash will be the latest BATTLE OF BRITAIN between English and Scottish club sides in European football. There have been some bloody good ones down the years…

The first European meeting of Scottish and English clubs came in the 1960/61 European Cup Winners’ Cup. It was the first time the tournament had been staged, and was only officially recognised by UEFA retrospectively in 1963. Only 10 teams entered, with Rangers dispatching a quality Wolves side 3-1 on aggregate after a 2-0 win in front of 80,000 at Ibrox secured thanks to a pleasingly old-school thumper from Alex Scott and a second goal six minutes from time from Ralph Brand after a defensive error. And look at that: Rangers – Rangers – were playing in hoops.

1969/70: European Cup semi-final, second leg: Celtic 2-1 Leeds (Agg: 3-1)
A record-breaking Hampden Park crowd of 136,505 saw John Hughes and Bobby Murdoch fire Celtic past Leeds and into the European Cup final. Celtic had earlier come through a thrilling second-round tie against Benfica on the toss of a coin after a 3-0 win in the first leg was followed by a 3-0 defeat in the second. Never complain about penalty shoot-outs ever again. Celtic’s luck ran out in the final, though, missing out on a second European title after going down in extra time to Dutch champions Feyenoord.

1981/82, UEFA Cup second round, second leg: Aberdeen 3-1 Ipswich (Agg: 4-2)
Aberdeen’s last European clash with English opposition came when Alex Ferguson’s splendid side of the early 80s sent Ipswich packing with a rollicking 3-1 victory at Pittodrie thanks to Peter Weir’s brace and a Gordon Strachan penalty earned after a calamitous hack from John Wark. Victory helped soothe the pain of the previous season’s 5-0 aggregate thrashing at the hands of Liverpool in the European Cup. After the 4-0 defeat at Anfield, Ferguson threatened to fine anyone who laughed on the bus home. He never did like Liverpool.

1992/93, Champions League second round, second leg: Leeds 1-2 Rangers (Agg: 2-4)
The first season of the rebranded Champions League pitted English champions against Scottish for a place in the eight-team group stage. The clubs agreed that away fans wouldn’t be permitted at either game for safety and security reasons, such was the depth of feeling around the clash. Rangers had overcome the shock of conceding to Gary McAllister in the opening minute of the first leg to take a 2-1 lead south to Elland Road, where a Mark Hateley goal and a flying header from Ally McCoist secured the victory despite a late consolation from mercurial Leeds talisman Eric Cantona. Whatever happened to him?

A cracking European night at a bouncing Celtic Park. A very young Michael Owen gave Liverpool a very early lead with a very Michael Owen goal, beating the offside trap before lifting the ball over Jonathan Gould like it was the easiest thing in the world. Celtic, though, hit back through Jackie McNamara and a Simon Donnelly penalty crashed in off the bar after David James had, ahem, ‘brought down’ Henrik Larsson and looked to be heading for a famous victory until Steve McManaman scored an absolute comic-book last-minute wonder goal to bring the scores level. Picking the ball up 30 yards from his own goal on the right touchline, McManaman bamboozled one Celtic player after another as he zipped across the turf before finally curling the ball in from 18 yards. It proved decisive as Liverpool ultimately scraped through on away goals after a nervy goalless draw at Anfield.

Revenge for Celtic came five years later in a run to the UEFA Cup final that also included a victory over Blackburn. But it was the quarter-final victory over Liverpool that lives longer in the memory, understandably, after a dominant performance marked by two stunning goals. Celtic had to attack after a 1-1 draw in Scotland, and did so from the off. The lead they deserved eventually came on the stroke of half-time when an Alan Thompson free-kick daisy-cut its way under Liverpool’s leaping wall and into the back of the net. Better was to come in the second half when John Hartson exchanged a one-two with Henrik Larsson, beat the last defender with a classic shoulder drop and then spanked home a goal that left Liverpool needing three goals in eight minutes with Emile Heskey up front. They did not get those three goals.