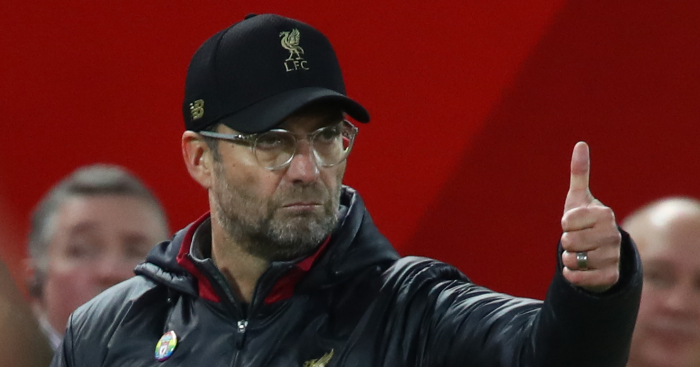 In January we put ‘a tentative tick’ next to the name of Jurgen Klopp in our annual Premier League managers of the year list; the tick was so tentative because Liverpool were yet to win anything under the German and the Reds had actually amassed the lowest points total of any top-six side that year. His inclusion – at the expense of Arsene Wenger – was a fine example of recency bias, with Liverpool ending 2017 on a 15-match unbeaten run.

Almost a year on, the tick is no longer tentative despite Liverpool making Daniel Storey look like something of a genius for predicting in January that they would be the best team to win nothing in 2018. While half that list will not be replicated – whether for reasons of absence or abject failure – the highest climber will be the German, unless December brings devastating and unexpected collapse. And never has a devastating collapse been less expected.

From a position of sixth among the top six in 2017, Klopp has forged the second-best team of 2018. After amassing 24 fewer points than Manchester City last year, they are just nine points adrift in 2018, leaving them two points behind in the actual Premier League table. That anybody is suggesting that his job should be in danger without silverware is utterly absurd. Finishing within eight points of this City side would be far more impressive than an FA Cup trophy; bring on the ticker-tape and the victory parade.

Liverpool have conceded five goals in 14 Premier League games. Read that sentence again and try and argue that winning nothing should preclude Klopp from any end-of-year baubles. Liverpool’s greatest weakness has become their biggest strength; indeed, they have conceded fewer goals than City in the Premier League in 2018. Being breached just 19 times in 31 games is almost miraculous – that’s a drop from 1.125 goals conceded per game in 2017 to a miserly 0.61 in 2018.

A great deal has been written both here and elsewhere about a shift in style from Liverpool this season – and it has certainly made them less fun to watch – but the cheering thing for fans should be that Klopp has deliberately shifted that style, successfully coaching the players to adapt to different opposition with a change of pace and tactics. In a week when we have asked whether Jose Mourinho still places any value at all in coaching, Klopp is revelling in the challenge of managing Liverpool towards sustainable success. “Coaches like to coach,” he says.

Asked why he has changed so much this season, he explained: “It’s like we were so lively in the past that the moment we couldn’t be lively because there was no space for that it was like there was immediately this drop in concentration. That is not allowed. I like it more now actually. It is more mature. That was the next step for us. So far so good.”

This new-found maturity may not suit players like Roberto Firmino – and does seem to have exposed the stodginess of their midfield options – but it certainly suits the Premier League table. They are ten points better off than at the same stage last season, when they had conceded more goals than half their top-flight rivals, including Swansea City. This is tangible and extraordinary progress. And yet there are still people who want to measure success purely in shiny things. It’s almost absurd.

In 2004/05 Jose Mourinho set a new as-yet-unbroken record when his Chelsea side conceded just 15 goals in a season on their way to his first Premier League title. At this stage of the season, they had conceded just six goals. Bizarrely, Liverpool are on course to break that defensive record, and may do so while climbing no higher than second in the table. If that is ‘all’ they achieve this season, then it is a triumph of coaching far greater than any Carabao Cup victory. Plentiful money has of course been spent, but not on Joe Gomez, Andy Robertson and Trent Alexander-Arnold. Coaches like to coach, after all.

Victory over Everton on Sunday was achieved with a large slice of luck (see 16 Conclusions for further details), but the solidity of this Liverpool side ensured that a 0-0 draw was the very least they would ever achieve; it has been over 18 months since they last lost at Anfield in the Premier League.

Will Liverpool end the year as the best team to win nothing in 2018? Probably. Does that mean we should withhold praise for a job incredibly well done? Absolutely not. Klopp may not be the manager of the year but he comes pretty damned close.