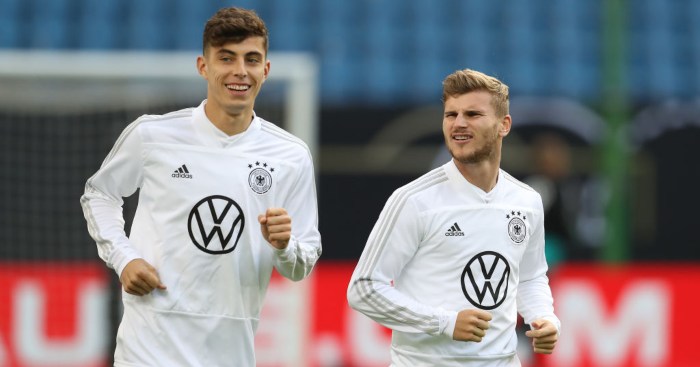 Bayer Leverkusen are still holding out for Kai Havertz’s asking price but are willing to compromise over how Chelsea pay for the attacker, according to reports.

Yesterday, The Athletic journalist David Ornstein claimed that Chelsea were ‘closing in on the signing of’ Havertz with the Blues ‘the only club ready to pay what it will take to secure him’.

Sources told Ornstein that the fee is likely to be around €80m (£73m) for Havertz, while they were ‘nearing an agreement on the proposed personal terms’.

MAILBOX: Man United defeat was not a sh*t-show after all!

And The Guardian on Tuesday also claims that Chelsea are ‘closing in on’ the Germany international although they are yet to agree a fee for the 21-year-old.

The report believes the Blues are hoping to strike a deal for ‘€80m plus add‑ons’ but Leverkusen want ‘as much as €90m’ for their star player.

Fabrizio Romano, who contributed to the report in The Guardian, says that Chelsea will decide this week ‘their final budget for transfers’ at which point they will see how much they have left for Havertz.

Havertz is still pushing to leave Bayer Leverkusen and he’d like to join Chelsea, confirmed.
During this week Chelsea board will decide also about their final budget for transfers (after signing Werner).
Bayer want around €80/90m for Havertz – it’s up to Chelsea 🇩🇪 #CFC #Chelsea https://t.co/TP2IDnQ2oA

Meanwhile, Bild’s head of football Christian Falk puts Leverkusen’s demands at €100m for Havertz but admits the German side would be willing to compromise over the structure of the deal.

True (but Leverkusen still wants 100 Mio Euro, but is open to having add ons/bonuses in a deal) https://t.co/oKZZwqQMmK