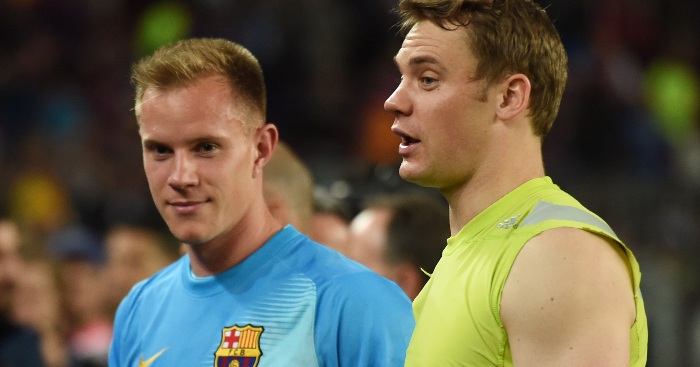 The Barca stopper spoke of his frustration over returning to a stand-in role for Joachim Low’s national team upon Neuer’s return from injury.

Neuer responded by suggesting that ter Stegen should stop complaining and Hoeness has now spoken out to defend the Bayern star.

“That’s a joke,” he told Sport1 when asked about the situation. “I think it is not okay how the Munich press deals with that topic. The press in western Germany supports Marc-Andre extremely. As if he had already won 17 World Championships.

“And I do not see support from the southern German press for Manuel. It is not okay to bring such a topic to the public.

“He [ter Stegen] has no claim to play. For the keepers it is different than for the other players, because you can’t constantly switch.”

“The hierarchy has to be clear and say: Manuel Neuer is the number one,” he said. “He has been the best goalkeeper in the world for many years.

“He was injured for a while, but it was clear that only he can be the number one when he returns to his old form. And he has now.

“I would have expected more support from the DFB. We always have trouble with the DFB. First the removal of our three players and now the same with Manuel Neuer.

“It’s not okay to allow a team-mate to go public on a topic he’s only supposed to discuss with Jogi Low.”