Home All The News Bayern interest dismissed, Pickford would be ‘stupid’ to move 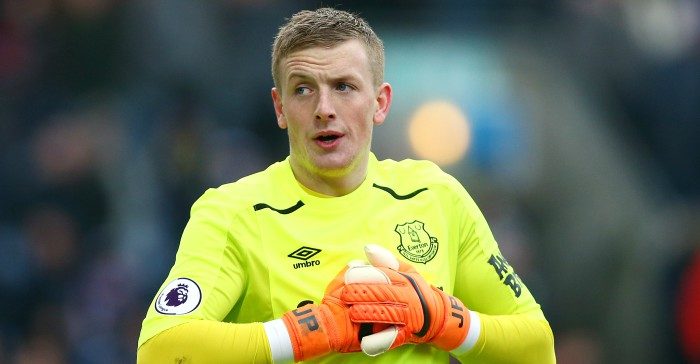 Reports that Bayern Munich were interested in signing Jordan Pickford from Everton have been dismissed.

Reports suggested the Bundesliga giants were monitoring the England No.1 at the World Cup, where Pickford enhanced his reputation with some solid displays for the Three Lions.

But Sky Germany says Bayern have no intention of making a move for the 24-year-old who moved to Goodison Park from Sunderland a year ago in a deal worth £30million.

“I think Everton is the right club for Jordan,” Moyes told The Sun.

“It’s a big club, he’s only just moved and I would say to him it would be stupid to even consider another move if there was to be an option for him.

“I think it will help him being at Everton because he will get enough work and he’s got a chance to develop without every single thing he does being scrutinised.

“He is still young and he just needs to keep getting his games in. The last thing he needs to bother about is any speculation.

“If you go to the World Cup and do as well as he has done, you’ve shown you can stand on any stage.

“But all he needs to do is go back to Everton, keep working and look to improve. Don’t let anything slip, don’t be complacent.

“At the moment he is a young player who has played very well. But the key to being a top player is going back and performing just as well.”