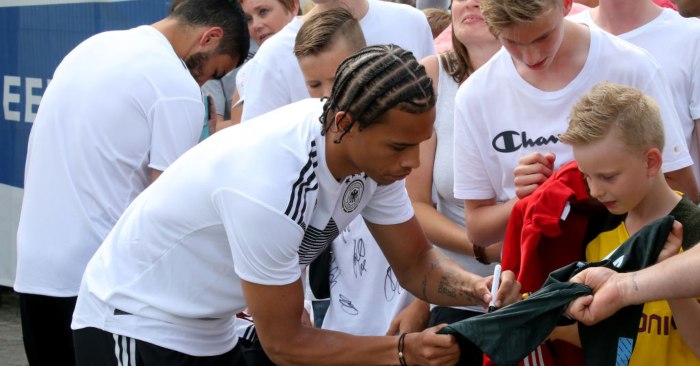 Bayern Munich have not yet made an offer for Manchester City’s Leroy Sane, according to their chairman Karl-Heinz Rummenigge.

The Bundesliga champions have made no secret of their interest in the German winger, who moved to City from Schalke in 2016.

But Rummenigge says Sane must first decide whether he fancies a move to the Allianz Arena.

“We have not made an offer for Leroy Sane,” the Bayern chief told Sport Bild. “That is still a long way off.

“First the player has to decide whether he can envisage himself coming to Bayern. If that is the case, we will start concrete discussions with Manchester City.”

Sane scored 16 goals in 47 appearances in all competitions last season but struggled to command a regular starting spot in the last few months of the campaign.

Bayern are on the lookout for wingers following the departures of Arjen Robben and Franck Ribery, but club president Uli Hoeness has already admitted a deal for Sane is unlikely because of the amount of money it will take to prise him from City.

Rummenigge added: “The player is the most important factor. Clearly Leroy has not yet decided.”

Meanwhile, Bayern have announced that James Rodriguez will leave the club this summer following his two-year loan from Real Madrid.

Bayern said in a statement that the Colombia international had asked them not to trigger their contractual option to sign him on a permanent deal and they had agreed to his wish.

“My big thanks goes to the entire club and the fans, who have always given us great support,” Rodriguez said.

“I had two unforgettable years in Munich and I have always felt very happy here.”