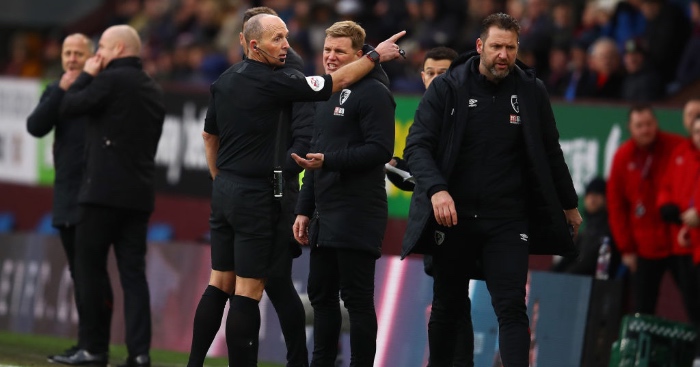 BBC pundit Garth Crooks has slammed Mike Dean and VAR after a controversial decision to award Burnley a penalty in their 3-0 win over Bournemouth.

The visitors thought they had equalised when Harry Wilson fired home but a VAR review ruled out the goal and awarded a penalty at the other end for a handball.

Jay Rodriguez stepped up to double Burnley’s advantage, with Dwight McNeil rubbing salt into the wounds of the relegation threatened Cherries.

And Crooks believes that Bournemouth are right to feel aggrieved as Dean waved play on initially, criticising the decision to bring back play 16 seconds later.

“As far as I’m concerned, we’ve had decisions involving VAR all season but nothing quite as a dramatic or, in my opinion, as awful as we saw at Turf Moor this afternoon,” he told BBC’s Final Score.

“VAR decides to bring it back to a phase of play that involved a handball, 16 seconds earlier, and I saw Mike Dean wave play on. The Burnley players are quite entitled to ask for a penalty and Mike Dean is within his right to say ‘no, play on’, and that’s what I saw.

“For the ball to come all the way back 16 seconds prior to the incident before the goal and for Dean to award a penalty is, for me, absurd.”