Home Mailbox Be grateful and cherish this England team… 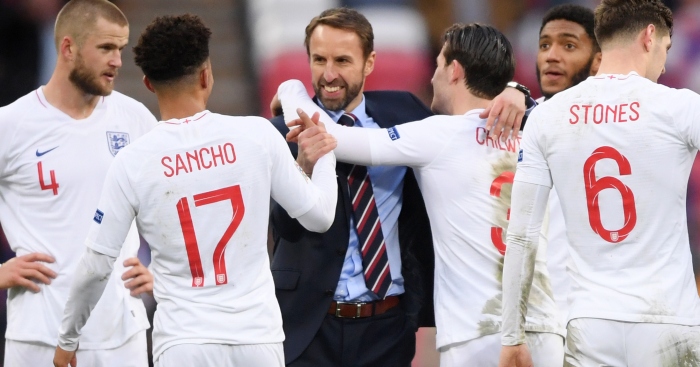 Send your thoughts for the afternoon Mailbox to theeditor@football365.com.

Gareth’s glory boys
England won a group that had Spain and Croatia, who would have thought. I think alot of betters lost money yesterday in terms of who would win that group. Im not an England fan, nothing personal, just grew up supporting the Netherlands. The manner of the win was remarkable, historic, and its quite telling how a no name manager, Southgate, has been able to achieve with his sensible decision making. Its a task, management, that is always easier said than done, and almost always, under appreciated.
I almost feel like this England is bound to win something, I had the same feeling watching Germany in 2010, they were too young and too good to not be able to achieve something and it offcourse came through in 2014, the same with France, and now with England. I couldn’t begrudge them winning the Euros or World Cup at all. The country hosts the best league in the world, its fitting that they also start being a major force in international football as well.Anyway, congrats to the English fans, they have done it the hard way, but by all impressions, the right way.
Dave(what’s that, the Dutch team could also qualify? Are you avin’ a laugh?), Somewhere

…Well done England. We might all still be getting to grips with this format but at the end of the day, we’ve played good teams and won. That’s the most important thing.
Looking back on 2018, we have played a large chunk of Europe’s best, (not including France) and haven’t been outclassed. I think the thing that has impressed me most is that we’ve managed to avenge recent defeats to Croatia and Spain. That’s not something England teams of recent years have ever been good at.
There is still going to be a gap between us and the worlds very best teams at least for now, but watching Southgate’ teams is making England exciting again. I’m actually disappointed that we have to wait til March (?) for our next game!?

Negative365
Don’t get Matt Stead’s ratings at all. It always feels with the English media that you need to focus on the negatives with the England football team rather than the positive. I thought this summer might have snapped you out of it but no, negative nelly will always raise her head.

Being from Ireland I’ve had to suffer some of the worst football ever seen over the last few years and being that we never really qualify for tournaments I alway end up shouting for the home nations and England this summer where brilliant. Southgate had the balls to cut alot of deadwood and put talented young lads into his squad, then he pumped them full of confidence and the results are starting to come, however this will never be good enough for the English media. On the ratings from the Croatia game only Delph escaped with any credit, words like “shaky, mistake and worry” where thrown around on players.

Why? This team had only 3 players over 25 on their starting XI. These where boys who where beaten by the very same opposition in only a few months ago, in a World Cup Semi final and you know what? They learned from that game, even a goal down it felt like you where going to win. These are young lads playing some of the best football I’ve seen from an England team since 1996. But you always feel the media are looking out for the next Beckham, Batty or Neville to blame.

Everyone in the world is raving about ball-playing keepers, you’ve got one.
Stones and Walker are part of the best defence in the league.
Midfield is full of options when everyone is fit.
Sterling and Kane are scoring goals for fun in the hardest league in the world and Rashford and Sancho over bloody exciting alternatives. Why not just embrace this wonderful team and be glad your not watching Jeff Hendrick smash long balls into Shane Long.

Embrace the positive and forget the negative.
Robbie DFC Éire. (my teacher used to use the “compliment sandwich” Positive /Negative /Positive)

Spoke too soon
Can I be the first to congratulate Dejan Lovren on his continued commitment to comedy in football. After getting large amounts of plaudits from certain fans for 1) admitting serious foul play and 2) demonstrating a total lack of class on social media. He then puts in a truly comic performance resulting in his team getting relegated a mere few days later. I don’t what Spanish is for schadenfreude, but I’m very sure I know a man in Madrid who does.

Time to can friendlies
If a player plays a friendly for a country (Declan Rice, Ireland) it does not count as he can decide to switch to another international team, so no cap should be given for a friendly appearance. My point is if a player scores in a friendly it should no count also as the player could still switch country, imagine how many goals most players would lose from there international records. Should be no friendlies in football, all matches should be competitive games to avoid players moving countries.
Gerard S. Dublin

Language barrier
As a result of being the only major football nation where players and managers never have to learn a second language if they don’t want to (and they probably won’t), England has developed the mostly wildly unrealistic expectations around language learning.

Naby Keita arrived here in July. That is 4 months ago. Before that, he was in Germany, working full-time, in German. Now, I’m here to tell you, as a language teacher of five years experience and someone who *has* learnt a language as an adult, that after 4 months even a decent student is going to have learnt veeeeery little from a standing start. The school I worked in used to have intensive 30-hr-a-week, 10 week courses. An averagely committed student with a normal aptitude for language, who did their homework and attended the majority of classes would require four of these courses to reach an intermediate level – , clumsy, basic, but communicative. After approximately 10 months of doing *nothing but learn English* they’d be able to get by but not much more.

Picking up languages as an adult is hard, frustrating, exceptionally time consuming and you’ll still sound foreign at the end of it. Footballers and managers have other stuff to focus on, plus plenty of team mates, partners and hangers on who speak their language. They might, through no fault of their own, be bad at picking up languages, after all, it’s not a skill they’ve been hired for. So can we all be a bit more bloody patient, rather than expecting people to chat away in English in front of a TV camera 5 minutes after getting here?
Jack Saunders

Vote for Harry
I don’t watch the show, and don’t intend to, but could a charitable mailboxer please give us a heads up with the details when there’s a chance to vote for Harry Redknapp to eat a kangaroo testicle?

With thanks in advance,
Andy (MUFC)

Shaq snip
Just watching Switzerland v Belgium. How much did Liverpool pay? Shaquiri might be worth a few quid more than that. Some teams might need to think about how you find a bargain, yes Man U, I’m looking at you.
Rob, Gravesend

Power play
Niall, Denver though this isn’t quite football related one can’t use the word, “government” to describe the Qatari or UAE regimes because they have never been elected. Power is handed down generationally and threats to said power are dealt with in a heavy handed manner to ensure nobody else gets any funny ideas again. Maybe you haven’t seen what regimes like theirs might do to a journalist, for example? It might’ve been left off the last Fox News show but there’s some references to it out there if you try raise your head above the parapet.

You might be confused by this, coming from the “land of the free” (unless you’re black or Hispanic or, God forbid, an actual native) but given the moves Trump is consistently making you might come to get an inkling for the difference between governments and regimes in the near future.

Unless you are one of those that has convinced yourself that your anti-establishment feelings are best expressed by the white billionaire who got rich by inheriting his dad’s fortune and paying minimal tax for twenty years whilst riding an asset bubble all the way up whilst the government did all they could to ensure his wealth would be protected at the cost of healthcare and education for the poorest. Then maybe you’re just not as smart as you think you are. But regimes and governments are different.

Also Liverpool are awesome. I can’t remember a season in which we haven’t improved in the second half so I am convinced that we can and will be better. (Now this email is football related so please publish it!)
Minty, LFC

Postcard from Africa
The penultimate qualifying round just ended and half the field is now known.
Friday’s highlight was Salah doing Salah like things and scoring a late winner and mane giving Kloop more reason to hate international week by getting injured.

There was also an interesting game where Burundi needed to win away and did so with three goals in the last 20 mins of their game with South Sudan, which means Saido Berahiho still has a chance to go to an international tournament.

Everything now goes on ice till March most of the big teams have now booked their passage except Ghana ,who are in a weird group where one team has been suspended for government interference and no one knows if they will play the games or just be thrown out.

There are ,as expected with so many spots up for grabs, a few interesting permutations going into the final week ,but the standouts are Libya who just won 8 1playing at home (actually a neutral venue due to the political crisis) up against south Africa who after winning there 1st game away to Nigeria, must have expected they would be in by now.
Another is a winner take all match between the aforementioned Burundi and Gabon who’s strained relationship with Aubemayang has overshadowed their qualifiers.

There is also the potential for other debutants or teams who haven’t qualified ,since afros where popular.All will be revealed in March
Timi, Super Eagles fan