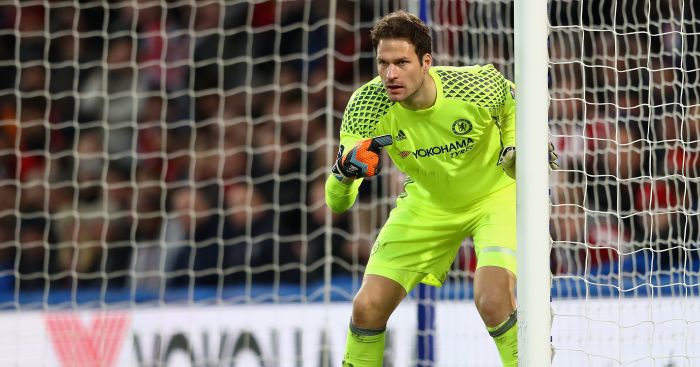 Asmir Begovic wants to leave Chelsea in search of regular football but “will continue to work hard” if the club don’t allow him to leave this transfer window.

The Blues are willing to let Begovic go in January but only if his manager Antonio Conte can find a replacement to provide competition for Thibaut Courtois.

Begovic appeared in Chelsea’s 4-0 FA Cup victory over Brentford at the weekend but spoke after the match about the need to play frequently.

“I find it very difficult, not playing for a long time and that’s [move clubs] something that I would like to do,” Begovic told Goal. “If the club would allow me to do that, under the right circumstances, then that’s what I’ll do.

“If not, I will continue to work hard and support everyone and the team. If everyone is happy then I hope something gets done, but if not, I have a huge respect for the manager and the club so they know my feelings and it is nothing other than wanting to play.

“It has been obviously not the longest relationship [with Conte], but so far, so good. We are quite open about it. He knows I am desperate to play and that’s all it is really. If he can make it happen for me then he will, but it won’t be just like that for anyone and if it can happen, in the next couple of days, then so be it. For me, it is about wanting to play.”

Courtois has been in great form this season and there is no reason to drop the Belgium keeper as Chelsea remain clear at the top of the Premier League table.

It will be disappointing for Begovic that it hasn’t worked out at Stamford Bridge but he insists he went to the club believing he could win the number one jersey.

“Of course [I thought I could compete],” he added. “Because chances to play for Chelsea don’t come around everyday and top clubs like this in general. When they come around, if you don’t believe in yourself, and don’t think things can happen for yourself then you shouldn’t be in this game.

“I truly believed there was a chance and something could happen, and ultimately I didn’t get as many games as I would have liked. Thibaut is on absolute fire this year and is one of the best goalkeepers in the world, I knew that, and I wanted to test myself against those guys.

“I feel like I am one of them [the best] but unfortunately no club is big enough to have two really good goalkeepers. I do [I feel like a great player], that’s the thing as well. I am 29, 30 in the summer and I feel fantastic.

“I feel in such great shape that it would be a waste not to play and show people what I can do. That’s the only thing, I do believe that I can play at this level and show everyone what I can do and that remains to be seen.”