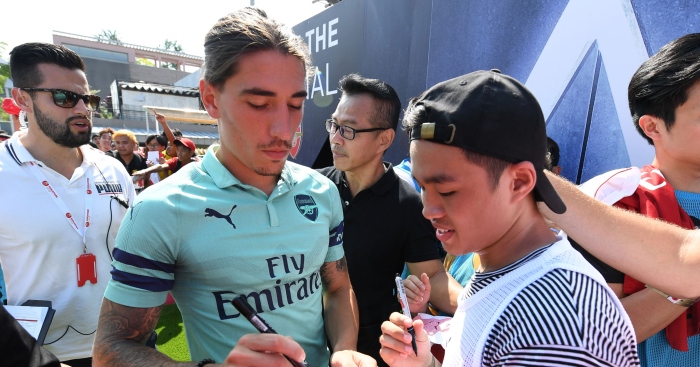 Hector Bellerin insists he is “very happy” at Arsenal as the full-back continues to be linked with a move away from the Emirates Stadium.

The 23-year-old has reportedly drawn long-term interest from the likes of Juventus but looks set to stay put.

He signed a six and a half year contract in 2016 and has developed through the Arsenal ranks to become a key member of their squad.

Bellerin, who has been handed the number two shirt ahead of the new season, has now moved to rubbish questions over his future.

“It is crazy that people ask me these questions all the time,” he told the London Evening Standard.

“A few years ago I signed a very long-term contract. I have never said that I have wanted to be anywhere else.

“The club have made me who I am and gave me the chance to be the footballer I am today. So I don’t want to be anywhere else.”

Bellerin will face stiff competition at right-back from new recruit Stephan Lichtsteiner this season as head coach Unai Emery looks to hit the ground running after replacing Arsene Wenger in May.

Emery appears happy with the shape of his squad ahead of the August transfer deadline and revealed at a press conference as part of Arsenal’s pre-season tour of Singapore that winger Alex Iwobi is close to extending his deal.

“I have the information, he is near,” he said of the Nigeria international.

“Mesut (Ozil), Mohamed Elneny and Iwobi are working with us – my first impression is very good. My information is he will sign to stay with us.”

That follows a 1-1 draw against Atletico Madrid on Thursday in the same pre-season friendly tournament, where youngster Alex Smith Rowe impressed as Arsenal lost 3-1 on penalties to the Europa League holders.