Home F365 Features Below Barcelona, there is an epic Spanish battle… 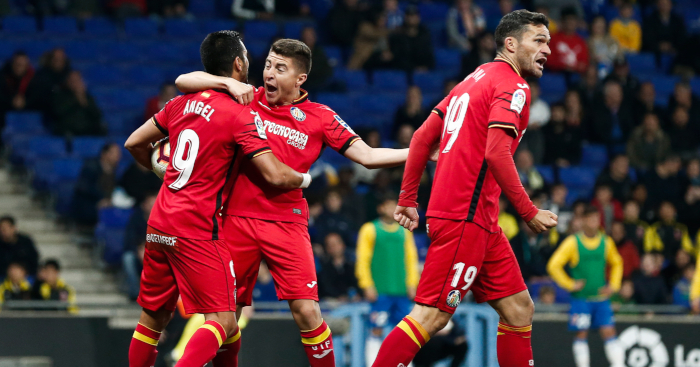 Barcelona’s 2-0 win over nearest rivals Atlético Madrid on Saturday more or less confirmed what we’ve all known for some time – that the Catalan side will win the league once again this season.

But although the league title is pretty much sewn up with seven games to play, there is an epic battle in full flow just a little further down the league.

Atlético Madrid and Real Madrid have shotgunned the second and third places for themselves, but there are no fewer than six teams scrapping for the final Champions League slot.

Getafe kept themselves in pole position with a much-needed 1-0 win over Athletic Club at the Coliseum on Sunday. Ángel’s late winner gave José Bordalás’ overachieving side a much-needed three points after three straight games without a victory.

Los Azulones have held on to fourth spot for a while now, regularly outfoxing and intimidating opponents with their direct and often confrontational style. The question is, can they hold on? Their recent wobble has suggested that they might not have the staying power required to see themselves over the line, but with a squad containing such talented warriors as the recently-capped Jaime Mata, the evergreen 36-year-old Jorge Molina and the highly-rated Djené, they will surely put up a spirited fight.

If Getafe make it to Europe’s premier club competition, it will be a huge achievement when you compare their budget to that of their chasing teams. They have spent just £20m this season, a pittance compared to fellow Champions League chasers Sevilla (£71m) and Valencia (£114m).

Given Sevilla’s outlay and their recent pedigree, it was expected that they would return to the Champions League next year, particularly as they were top of the league as recently as December. But a run of one win in ten La Liga matches between January and March saw them drop down to seventh, and manager Pablo Machín paid for that slide with his job.

With four wins in their last five games under interim manager Joaquín Caparrós, who has vowed to continue as coach despite being diagnosed with chronic leukemia in recent weeks, Sevilla have put themselves right back into the mix for the final Champions League slot, and now trail fourth-placed Getafe by a solitary point.

Three points behind Sevilla are Valencia, who have recovered well after a pretty dreadful first half of the season. Until this weekend, Los Ché were unbeaten in 12 La Liga games, but their train came to an abrupt, unscheduled stop with a 2-0 defeat at relegation candidates Rayo Vallecano on Saturday.

Their recent form and undoubted quality have made Valencia favourites to take the final Champions League berth in the eyes of many, but the defeat in Vallecas shows they are still vulnerable, and unlike their rivals they still have the potential distraction of an ongoing European campaign.

Just a point behind Valencia are Alavés, who are challenging Getafe for the accolade of ‘greatest overachievers in La Liga’. They have defied expectations by maintaining their place at the top end of the table for most of the season, and despite a sketchy run of recent form are still in with a shout of Champions League football with just five points separating them from fourth place.

It may prove to be a bridge too far for the Basque side, but whatever happens, their manager Abelardo deserves huge praise for bringing his inexpensively-assembled side into the Champions League conversation.

Two teams that have recently joined that chat are Athletic Club and Real Betis, who are both now seven points away from the top four. Both sides have the requisite quality to mount a challenge, but may have left it too late, especially as they would have to rely on all of the teams above them dropping points.

Getafe probably have the toughest run-in on paper, with Real Madrid and Barcelona lying in wait, but none of them have it easy. Betis are the only team of the six who don’t have to face any of the top three, but that may count for nothing, particularly as the top three have very little else to play for, as the title and first two Champions League places are all but settled.

With just seven games left to play, anything can happen, and while the destination of the title is all but decided, there is still a great deal to play for in the race for fourth place.