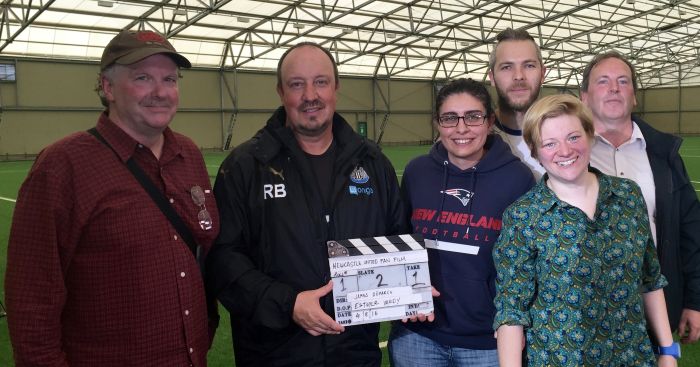 Rafael Benitez has endorsed a documentary film following Newcastle United supporters throughout their season in the EFL Championship, while also revealing that his daughters helped convince him to remain at the club.

‘We Are The Geordies’ focusses on the fans of the club as they face a difficult season back in the second tier of English football following their relegation from the Premier League at the end of their last campaign.

The team on the pitch and manager don’t play a key part in the documentary but the Gateshead-based filmmaker behind the project, Zahra Zomorrodian, is delighted that Benitez agreed to give a short interview for the documentary.

In his piece for the doc, Benitez urges fans to back the team to the Championship title this season, while also hoping they get behind the documentary.

“I am trying to support this [the film].  I think it’s important to do this film for the fans, about the fans, and I think that you will enjoy it.

“I will say to all of you, stay keeping and supporting the team.  Stay behind the team and the players, they will appreciate that.

“And you will be a crucial part if we go up. It depends on you.  We can try our best but you can make a difference.”

? RAFA gives a message to #NUFC supporters during his interview for @GeordiesFF https://t.co/Q9kaR19MOz

The former Valencia and Liverpool coach also revealed that Newcastle fans should be grateful to his daughters for convincing him to remain on Tyneside.

Asked whether his daughters had a bearing on his decision to stay with the Magpies, he said: “It’s true.  My family wanted me to stay because I was two years in Italy, six months in Spain.  So for them, to stay in England was really important.

“For one or two weeks, they were pushing and pushing.”

For more information about ‘We Are The Geordies,’ and to contact Zahra, please visit www.GeordiesFF.com.