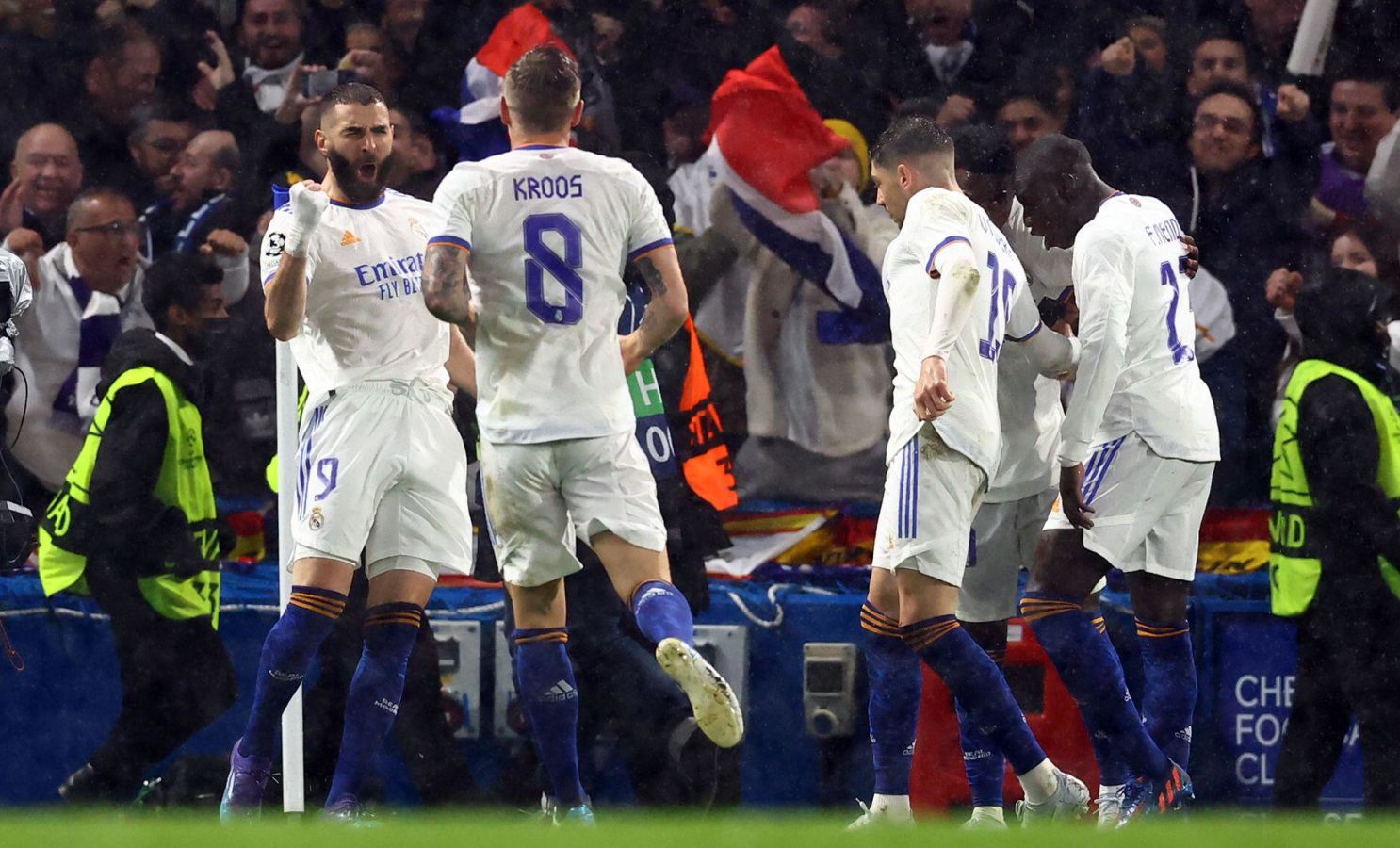 Karim Benzema was the spearhead of a majestic Real Madrid display against a suddenly out-of-sorts Chelsea. The 13-time champions stormed Stamford Bridge to place one foot firmly in the semi-finals.

People often talk of “perfect hat-tricks”, by which they – quite wrongly – mean one comprising a goal scored with each of the head, left foot and right foot.

Then there are “German hat-tricks”, which (to my mind needlessly) place extra restrictions on what counts as a proper hat-trick by insisting they must be three consecutive goals scored within the same half.

The logical extension of those twin daftnesses is the Perfect German hat-trick. Left-footed, right-footed and headed goals scored without any other goals or a half-time whistle interrupting. At this point you’re raising the difficulty tariff to something approaching cricket’s version of the achievement.

But it’s all tish and fipsy. Because the perfect hat-trick was scored tonight at Stamford Bridge by Karim Benzema. Two brilliant goals and a comical one is definitely the best kind of hat-trick.

It was also his second consecutive hat-trick in the competition having turned the PSG tie on its head in the last 16. Having emerged from Cristiano Ronaldo’s shadows to become indisputably Real Madrid’s main man he is on Ballon d’Or-winning form right now. More importantly, it’s potentially Champions League-winning form.

His first two goals were magnificent, both absurdly difficult and very different headers sent arcing beyond a despairing Edouard Mendy. Key to both, beyond Benzema’s exemplary movement and finishing, was the quality of delivery. The first was created by the equally excellent Vinicius Junior, whose pacy delivery from the left allowed Benzema to get enough on the ball to find the top corner from a good 14 yards out.

Then Luka Modric – the second former Spurs schemer to have a lovely old time at Stamford Bridge this week – curled in a beauty from the right which Benzema almost just let hit him on the head and rebound back inside the post. It was reminiscent of a couple of goals at the old White Hart Lane, actually. One scored against Spurs by Edin Dzeko, one by Harry Kane against Arsenal a few years later. But it was better than both, marked out by the freakish apparent effortlessness of it all. It was surely the greatest header anyone at Stamford Bridge had seen for, ooh, a good three minutes.

Chelsea at this point were also, it should be noted, a shambles. Madrid’s midfield three had seized full control of the pitch and both Vinicius and Benzema had more than served notice of their threat before the goals came. Chelsea, four days after an embarrassing defeat to Brentford, were being overrun again. Real Madrid are very much like Brentford in many ways.

Thomas Tuchel looked to grab the lifeline with significant half-time changes. Off went Andreas Christensen to spare him any more torment from Vinicius. More contentiously but also perfectly understandably based on the evidence of the 45 minutes that had just gone, so too did N’Golo Kante. On came Mateo Kovacic and Hakim Ziyech. This was bold stuff, and it was to Tuchel’s credit that he saw Havertz’s goal before the break as an opportunity but not vindication.

Maybe those changes could have turned the tie back in Chelsea’s favour. We’ll never know, because then came the calamity Chelsea’s play had threatened. Mendy left a routine short pass to Antonio Rudiger short. Rudiger, already on a booking, didn’t commit to tackling the onrushing Real Madrid player which was, of course, Benzema and the rest was a formality. Two great goals, one stupid one, and Benzema became only the fourth player to score consecutive Champions League hat-tricks, joining Luiz Adriano and the two you’ve already guessed.

That was already more than enough narrative and action for one night, but there was still time for more. Romelu Lukaku came on and touched the ball four times. Two of those touches were headers from which he really should have scored to at least reduce Chelsea’s deficit and offer a slim chance of pulling something out of the fire in Madrid.

The contrast from Benzema’s first-half masterclass could not have been more stark. The elite striker at the peak of his powers, and the one struggling desperately to relocate his spark.