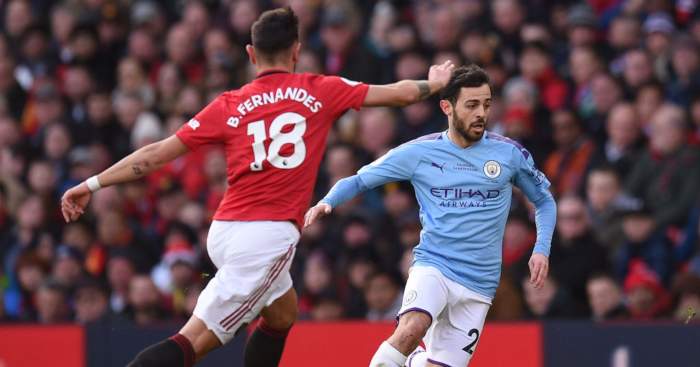 Manchester City midfielder Bernardo Silva has reminded new Man Utd man Bruno Fernandes that “he still has to eat a lot of soup” before he can win a Premier League title.

The Portugal international made a huge impact for Ole Gunnar Solskjaer’s side after signing in January and was voted the Premier League player of the month for February.

Fernandes helped Man Utd to an 11-game unbeaten run in all competitions before the season was suspended due to the coronavirus pandemic.

The 25-year-old won his first match against Man City since his move to the Premier League in March with goals from Anthony Martial and Scott McTominay giving Ole Gunnar Solskjaer’s men a 2-0 win.

Despite that win, Fernandes’ compatriot Silva has reminded him that he has a long way to go if he wants to lift titles with Man Utd in England.

Speaking on Portuguese TV show 5 Para a Meia-Noite, Silva said: “I went to Troia with some friends and it was a lot of fun. We ran, played tennis. Now I’ve been here in Manchester for 10 days and I’m sick of it.

“I spoke to [Fernandes] about three days ago. He’s winning 1-0 in the games between us here, but he still has to eat a lot of soup to reach the titles.”