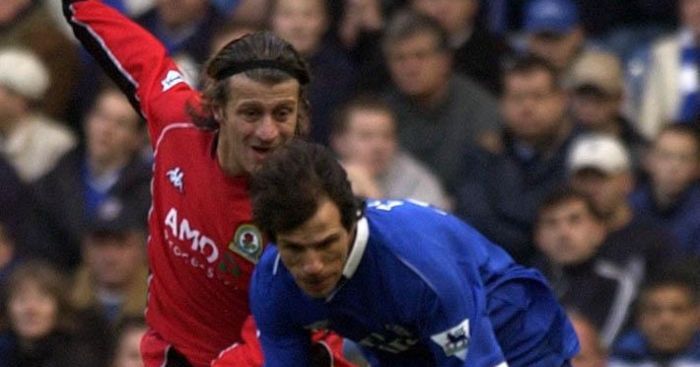 Edinson Cavani and Thiago Silva might soon find their way onto such a list. The age of the player at the time of his Premier League debut is in brackets. Sorry to Henrik Larsson.

10) Youri Djorkaeff (33 years, 11 months, 14 days)
Perhaps he was embellishing the truth when he suggested that Gerard Houllier and Sir Alex Ferguson sought his services upon a bitter parting of the ways with Kaiserslautern in early 2002. But Youri Djorkaeff, who scored for the Bundesliga club in the UEFA Cup semi-finals less than a year earlier, did indeed find himself in the north-west of England during the twilight of a wonderful career.

A move to Bolton was designed to ensure a fairy-tale end to almost ten years as an international that saw him and France dominate both continent and globe. He needn’t have bothered – the Frenchman started the opening game of a disastrous 2002 World Cup in South Korea and Japan and played just nine minutes thereafter – but the irony is that it resuscitated an ailing club career. Djorkaeff rose to the challenge of keeping Bolton up in his first few Premier League months, then again in 2002/03. Finishes of 16th and 17th preceded a memorable last season towards the top, scoring ten times to secure eighth place and a League Cup final as that iconic team approached its zenith, thanks in no small part to a player who made his professional debut when Bolton were languishing in the third tier.

9) Jurgen Klinsmann (30 years, 21 days)
As English football continues to struggle to detach itself from 1966, 1986 and 1990, consider how fresh any sense of injustice – and how high this country’s collective horse was – in 1994. Jurgen Klinsmann, whose unseemly dive and post-tackle flourish to adorn Pedro Monzon with the first red card in World Cup final history, was not welcomed on these shores with open arms by anyone other than Alan Sugar.

The story of how he disarmed a suspicious press at his first conference has been oft-told. What followed was a destructive season to win not only the hearts of the Tottenham fanbase but of the entire nation, 29 goals earning a move to Bayern Munich and then Monaco before his triumphant return as the adopted prodigal son helped stave off relegation in 1998. Klinsmann dived head-first into the sunset, retiring on the cusp of his 34th birthday with six goals in his final three Tottenham games, his reputation thoroughly rehabilitated and enhanced. Jay Goppingen has Klinsmann posters on his bedroom wall.

8) Zlatan Ibrahimovic (34 years, 10 months, 11 days)
“As I said when I was in England, you’re lucky I didn’t come 10 years ago, because if I did what I did at 35 years old, imagine it if I was 25. Then it would have been a different story. I came there and they said I came in a wheelchair. All the people that talked, in the whole Premier League, I put them in a wheelchair. That’s what I did.”

The humility that has underpinned Zlatan Ibrahimovic’s entire career was no more present than when reminiscing over his only proper season in the Premier League. The Swede was indeed written off by many due to his age upon arriving in summer 2016 but 28 goals in 46 games spoke for itself, as if he has ever needed anything or anyone to do so. With ten goals in his first six Serie A games for unbeaten Milan at 39 this season, his party trick still inspires frustrated admiration.

7) Tugay (31 years, 15 days)
Legend has it that Steven Gerrard, the inspiration behind a historic Champions League final comeback 18 months prior, is still looking for Tugay Kerimoglu. A step-over and a shimmy put paid to the Liverpool captain on Boxing Day 2006 before a sensational pass released Morten Gamst Pedersen to assist Benni McCarthy’s winning goal. Tugay, as with much of what Blackburn produced throughout the 2000s, was the overlooked architect at the heart of it all.

A month prior, the 36-year-old tested the structural integrity of the nets at Ewood Park with quite the thwack against Tottenham, having earned the apparent praise of a fawning Ferguson the previous week. While long-range strikes were most certainly Tugay’s forte, that does a disservice to the brilliance of a midfielder once described by Mark Noble as his “toughest” opponent after being “fooled” by “his greying hair”. Mark Hughes was thankfully a little less backhanded with his compliments: “People say to me, ‘don’t you wish he was ten years younger?’ My answer is no, because if he was he would be at Barcelona.”

6) Ruud Gullit (32 years, 11 months, 18 days)
The charge immediately held against Ruud Gullit was that he accepted the chance to wind his playing career down in the English capital because of the money and the music on offer. “Somebody took it the wrong way because I joked that if there was a good soul concert in London I would be unavailable,” he responded when asked whether it was true he would pick and choose which games he played for Chelsea.

The Dutchman spent the autumn of his career producing performances that could be played against such a backdrop. So ahead of the game and his teammates was Gullit as a sweeper – “I would take a difficult ball, control it, make space and play a good ball in front of the right-back…except that he didn’t want that pass” – that manager Glenn Hoddle acquiesced and moved him into midfield. Neither Chelsea nor the Premier League were ready at the time for such a trailblazer. Those 48 top-flight games in England were manna from heaven and cruelly finite at the same time.

5) Wes Morgan (30 years, 6 months, 26 days)
In the pantheon of Premier League outfielders to have played every single minute of a title-winning campaign, Wes Morgan sits patiently alongside Gary Pallister, John Terry, Cesar Azpilicueta and Virgil van Dijk. Narrow the field further and only Terry can also claim to have worn the captain’s armband at the same time.

Morgan is the undoubted outlier here, signed by his club a week after turning 28 but having to wait until his milestone year for a first crack at the Premier League after promotion. It took Leicester and their leader – “Baloo off The Jungle Book”, according to Claudio Ranieri – a few months to adjust to the challenge but he and they have only prospered since. That England call-up must surely be in the pipeline.

4) Claude Makelele (30 years, 6 months, 26 days)
Silva is just the latest in a long line of older Stamford Bridge imports. It was Chelsea’s carjacking of Zinedine Zidane’s Bentley that laid the foundations upon which Roman Abramovich built his empire. The “battery” that powered Ranieri’s transitional team became the hub of Jose Mourinho’s champions – and the scourge of Les Ferdinand.

“The worst thing that happened in this league was Claude Makelele,” the former Tottenham coach once claimed, publicising his hatred for holding midfielders. But the proliferation of players in that position was a classic case of copying the homework of the brightest kid in the class but being unable to show the working-out. Makelele’s eponymous role was always more than that of simple defensive shield, as Chris Coleman proved to surprising success in March 2006. Chelsea attacks could usually be traced back to the same feet at which opposition assaults collapsed. The Blues won two Premier League titles in his first three seasons; Real Madrid went four years without a La Liga crown upon his sale.

3) Jens Lehmann (33 years, 9 months, 6 days)
For more than a decade, Arsenal did not have to concern themselves with such frivolities as signing a starting goalkeeper. That did not stop them trying – good morning, Richard Wright – but David Seaman saw off even the concept of Sebastien Frey transfer speculation to hold onto the gloves from his 1990 arrival in north London to his eventual departure in 2003. When Arsene Wenger did finally have to replace his most-trusted lieutenant, he hardly went with youth.

Jens Lehmann was his left-field choice, a 32-year-old Bundesliga champion whose first three seasons at Arsenal were each defined by different competitions. 2003/04 was the campaign in which he became a Premier League Invincible, 2004/05 brought FA Cup heroics and the Champions League record of 853 minutes without conceding en route to the 2006 final still stands. As predictably unsuccessful as the German’s 2011 return was, it is worth wondering just how irate he would be in this current side.

2) Gianfranco Zola (30 years, 4 months, 11 days)
‘It has transpired that Parma have been keen to unload Zola after he fell out with their coach, Carlo Ancelotti, and the Italian club will doubtless be very happy with such a fee for a 30-year-old,’ was how one newspaper reported on the deal that transformed Chelsea. It is no exaggeration to suggest they would not be where they are now without Diego Maradona’s Napoli apprentice.

Zola changed how people perceived the British game, one previously fortified by strength and speed but bent to the will of a 5ft 6ins magician who somehow buried an abundance of tricks and flicks in those short sleeves. He was Ferguson’s “clever little so-and-so”. Roman Abramovich’s reason to invest. The captivating genius who helped an entire generation of Chelsea fans dream and rarely with anything other than a beaming smile in the process. He was as priceless as £4.5m can ever be.

1) Edwin van der Sar (30 years, 9 months, 21 days)
One might assume that Edwin van der Sar would have raised an eyebrow if he was told at his Fulham unveiling that he would retire ten years later as a four-time Premier League champion with three more Champions League final appearances to add to his 1995 victory with Ajax. Yet it was during his first press conference that he admitted “the championship is not a realistic ambition this year” for the promoted club, before adding: “But maybe in four years’ time.”

It was after those four years of finishing anywhere between 9th and 13th that the Dutchman moved to Manchester United, a reward for unerring levels of consistency in west London. A total of 42 clean sheets in 127 league games for a mid-table club became 90 in 186 as he returned to the sort of elite platform from which Juventus pushed him in a Gianluigi Buffon-induced haze. Van der Sar finally bowed out at 40 as an English champion, the last game of his illustrious career spent picking the ball out of the net three times against one of the greatest teams in history on the biggest stage, the Dutchman still with plenty to offer but no reason to do so and nothing left to prove. To think it all started with Fulham throwing their weight around.