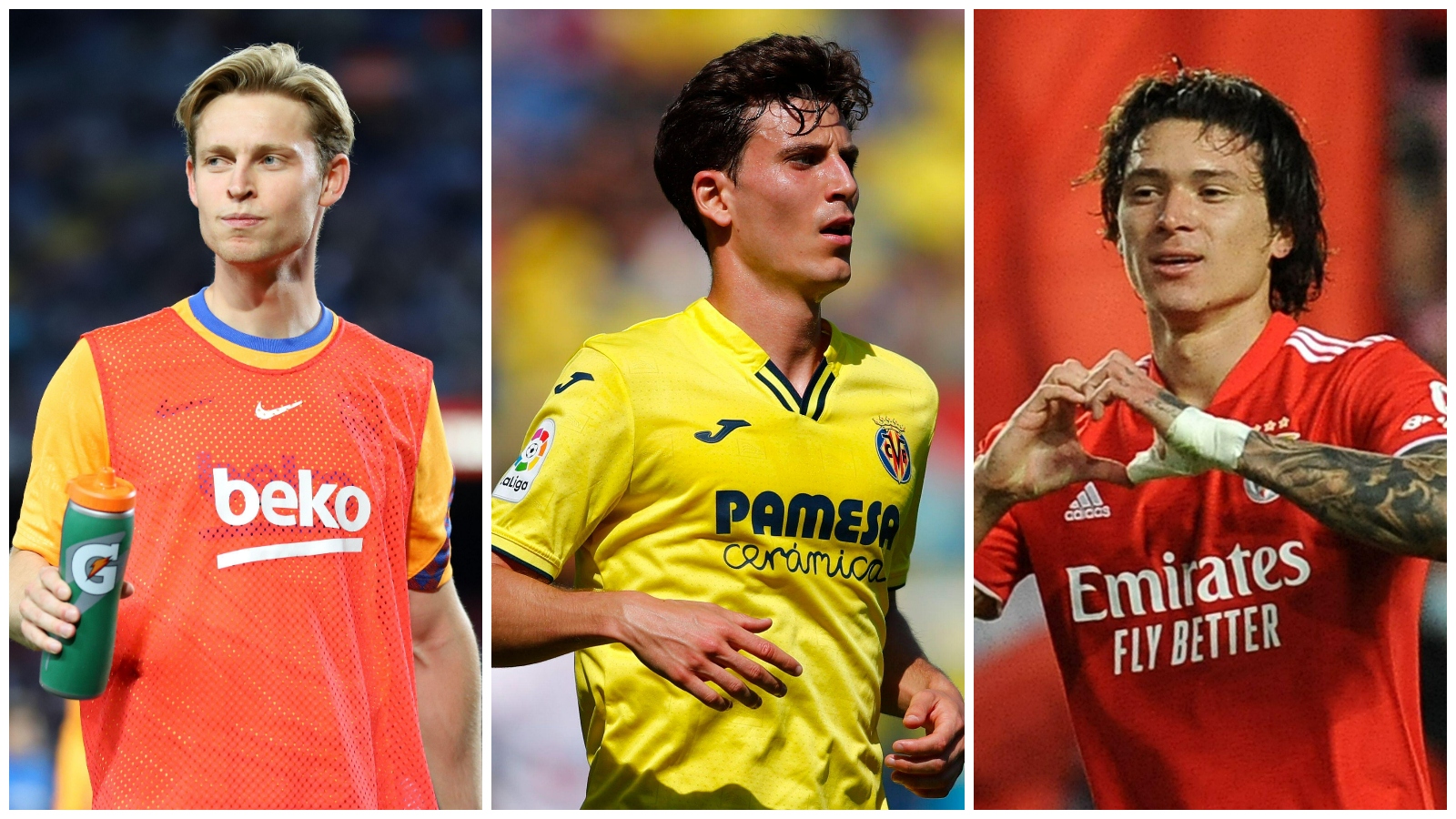 The transfer window is approaching which means one thing: rumours are rife. Looking at said rumours, whether it be complete bull**** or likely to materialise, we pick the best possible signing each Premier League side can make this summer.

Arsenal – Gabriel Jesus (Manchester City)
This might not be a blockbuster transfer and is perhaps not as new and shiny as someone like Darwin Nunez, but Jesus makes a great deal of sense. The Brazilian striker is out of contract in 2023, is Premier League proven and has that natural instinct in front of goal. Mikel Arteta knows the player from his time as Pep Guardiola’s assistant and is in dire need of bolstering his attack in the summer with Alexandre Lacazette and Eddie Nketiah both likely to leave the club on free transfers. No new striker means Folarin Balogun will play every minute of every game next season, which I don’t think would go down too well in north London.

Aston Villa – Kalvin Phillips (Leeds)
Although Villa could do with improving the centre of their defence, they seem hell-bent on signing Phillips this summer with a £60m deal being rumoured. A player of his calibre should aim higher and is destined to play for one of the so-called ‘Big Six’, but Steven Gerrard’s side appears to be leading the race.

Brentford – Christian Eriksen (Brentford)
Brentford were the team that took a chance on Eriksen and offered him a contract after the Dane left Inter Milan as he could not play in Serie A because he had a defibrillator fitted after his cardiac arrest at Euro 2020.

Eriksen has been excellent for the Bees and is now attracting interest from Manchester United (poor sod) and his former club, Tottenham. The 30-year-old playmaker should be Brentford’s number one priority this summer after they only signed him on a six-month contract in January.

Brighton – Eddie Nketiah (Arsenal)
As you can probably imagine, Brighton transfer rumours are not as easy to find as their Premier League rivals. Something to do with clicks and making money…

Anyhow, Graham Potter could really do with signing a new striker and if Nketiah is good enough to start for a team that will potentially finish fourth, he is good enough to lead the line for Brighton. He has shown promise during his time as Arsenal’s No. 9 and is only 22; he could really come to the fore at the Amex.

Burnley – Seko Fofana (Lens)
Our first transfer involving a non-Premier League side. How exciting! Burnley were reportedly keen on signing Fofana in January but could not make a deal happen, with a summer move now being explored. The Clarets’ move for the Ivorian midfielder will heavily rely on their top-flight status as PSG, Lyon, Marseille, AC Milan and Atalanta are also reportedly interested. A move to Burnley is obviously more appealing than any of those.

Chelsea – Declan Rice (West Ham)
Rice to Chelsea seems one of the most inevitable transfers in world football. It’s just a case of if the Blues will pay what West Ham want for the England midfielder.

On a side note: writing in his Telegraph column, Jamie Carragher suggested that Chelsea should sign Sadio Mane, which would be absolutely brilliant. This potential deal was simply too good to ignore.

Crystal Palace – Conor Gallagher (Chelsea)
Sticking with Chelsea, Palace should really look to make their loan signing of Gallagher permanent. It is not surprising that Patrick Vieira is eager to buy the England international, recently named the club’s player of the season. TalkSPORT say the Eagles are ‘desperate’ to sign Gallagher – and so they should be.

Conor Gallagher & Marc Guehi with their Player of the Season Awards. 🏆 pic.twitter.com/nCrHDTL65A

Everton – Gavi (Barcelona)
Everton’s transfer business in recent seasons has been s**t to say the least, so whoever they sign will likely flop. That’s just the nature of the beast, unfortunately.

Having said that, Gavi? Where has this one come from?! I’ll tell you, actually: AS in Spain. They reckon that Everton have a chance of signing the Spanish wonderkid. If it happens, fair play, what a signing. However, there is probably more chance of Norwich spending two consecutive seasons in a division.

However, the Whites are apparently in for Watford striker Emmanuel Dennis. The Nigerian has been Watford’s best player this season and will likely leave Vicarage Road after relegation was confirmed. Leeds need more depth up top and have an important summer ahead whether they go down or stay up.

Leicester – Kieran Tierney (Arsenal)
There is pretty much no chance of this transfer happening, but it is a story that exists.

As per 90min, Foxes manager Brendan Rodgers ‘remains a huge fan’ of Tierney from their time at Celtic. Fair enough. ‘Should the Gunners show any willingness to sell or the player angles for a move then it is believed Rodgers will again make his interest known,’ it is added. Once again, fair enough, Brendan. Feel free to have a go. But if the Scottish left-back is pushing for a move, it will likely be for someone bigger.

Liverpool – Jude Bellingham (Borussia Dortmund)
Bellingham can walk into any team in the world having developed tremendously for Borussia Dortmund. The Germans are obviously keen on keeping hold of the midfielder, but their business model indicates that he will definitely leave within the next few years.

A transfer to Liverpool would be perfect for the club and the player. The Reds’ midfield is not glowing with world-class talent, but it works. Bellingham would fit the mould at Anfield and could potentially take the team to a new level. He is also bound to win things and be a mainstay in the England team for years to come should he move to Merseyside.

Manchester City – Frenkie De Jong (Barcelona)
With Erling Haaland’s move to the Premier League done and dusted, City can turn their attention to other targets.

It will take some doing to improve this squad, but De Jong would suffice. He is a similar player to Rodri – who is hard to replace – and like any City signing, will be in and out of the starting XI as Guardiola loves to rotate and keep his opponents guessing.

What would make De Jong an even better signing is the fact Manchester United are reportedly very keen on signing the Dutch midfielder.

Manchester United – Frenkie De Jong (Barcelona)
Plenty of rumoured signings would be brilliant for United, who are in dire need of improving their squad. Pau Torres would be an upgrade on Victor Lindelof and Harry Maguire. But the Red Devils are screaming out for a new central midfielder. De Jong would be perfect and obviously worked with Erik ten Hag at Ajax. Whether or not he will move to a team without Champions League football remains to be seen.

Newcastle – Kylian Mbappe (PSG)
He has been linked, right? Someone photoshopped him into a Newcastle kit. It is pretty much a done deal.

If any Newcastle fans are going to get their knickers in a twist and claim that I haven’t been serious here, then my seriously serious pick is Lucas Paqueta. Happy now?

Antoine Griezmann tells Kylian Mbappé that he bought him for €134m on Football Manager as Newcastle United – Mbappé: “Where? It is not very warm there eh.” pic.twitter.com/5cGzqntfBg

Norwich – Callum O’Hare (Coventry)
O’Hare has been excellent in the Championship this season and with Norwich playing their football in the second tier next term he would be a handy addition.

He is basically the second coming of James Maddison and will star at Carrow Road after joining from Coventry, only to leave for over £20m a few years later.

Southampton – Armando Broja (Chelsea)
Keeping hold of club captain James Ward-Prowse will likely be Southampton’s summer priority. Having said that, recruitment is necessary if the Saints are to push on.

Picking another Chelsea loanee, making Broja’s move permanent would be a solid piece of business for Southampton. Broja has scored nine goals in 37 appearances this term and has also attracted interest from Arsenal and Napoli.

Tottenham – Pau Torres (Villarreal)
The Spanish centre-half would be a superb signing for Tottenham and has the potential to form a great partnership with Cristian Romero.

The Spurs defence can easily be improved. Marc Cucurella has been linked and would be an upgrade on Ryan Sessegnon, while, Paulo Dybala and Lautaro Martinez would heavily bolster Antonio Conte’s attack. The signing of Torres should not be overlooked in favour of attacking firepower, however, as he is a much better option than Eric Dier and Davison Sanchez.

Watford – Jean-Paul Boetius (Mainz)
Transfer stories are few and far between for a freshly relegated Premier League club; who’d have thought it?

The Telegraph reckon Watford are in for Mainz midfielder Boetius. The 28-year-old is a free agent this summer and has four assists in two goals for his side this season.

West Ham – Darwin Nunez (Benfica)
David Moyes tried to bring Nunez to the London Stadium in January but Benfica were not interested in letting him leave. West Ham are very ambitious but can be considered as outsiders in the race to sign Nunez with Arsenal, Tottenham and Manchester United also keen.

He will arguably be the most sought-after striker this summer after the Haaland saga ended. Nunez has scored 26 league goals in 28 appearances this term.

Wolves – Joao Palhinha (Sporting)
Who better to join Wolves than another Portuguese player? With Ruben Neves likely to leave this summer and Joao Moutinho not getting any younger, Palhinha would be a welcome addition for Bruno Lage.

The 26-year-old is a mainstay in the Portugal squad and has been heavily linked with numerous Premier League clubs.