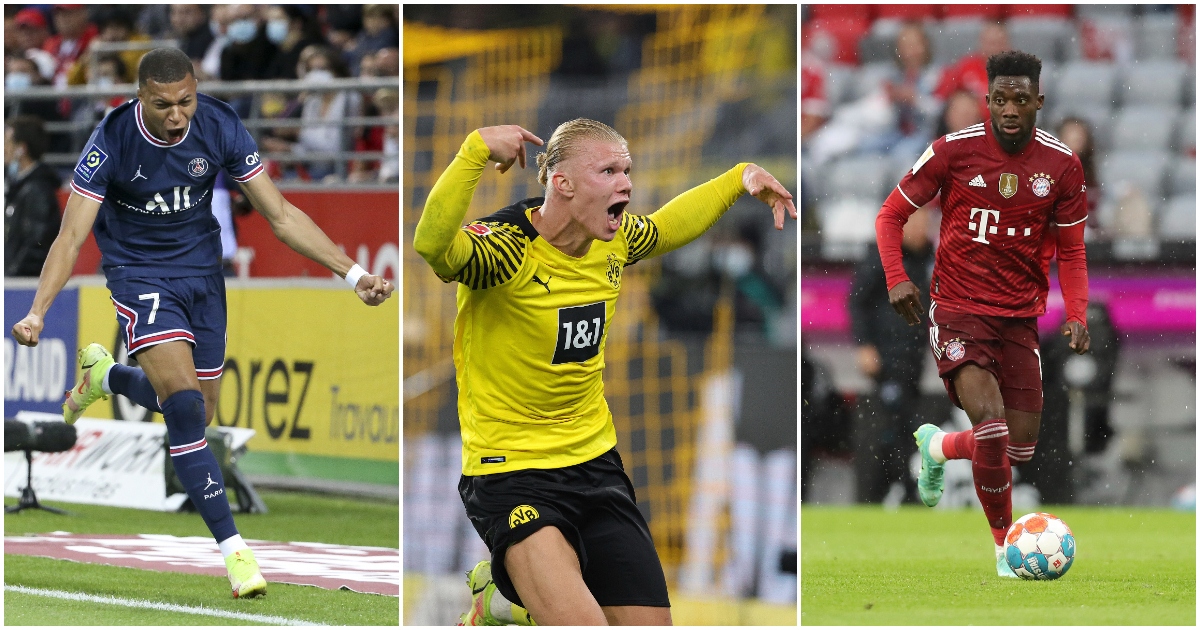 Building the perfect team full of the best young players in world football is a tricky task (except when it comes to Kylian Mbappe and Erling Haaland). Some positions are incredibly easy to pick whereas others are pretty debatable. All we do know is, selecting a team full of players aged 22 or younger is a lot easier than picking a team without an age cap, and a lot less daunting too…

Goalkeeper – Gianluigi Donnarumma (Paris Saint-Germain)
Donnarumma epitomises the word ‘wonderkid’. Not given the same coverage as Kylian Mbappe or Erling Haaland by dint of being a lowly goalkeeper, the Italian shot-stopper has been doing it at the very top level since the age of 16. Now 22, he is coming off the back of a European Championship win with Italy which saw him named player of the tournament.

He was called up to the AC Milan first team as a 15-year-old and made his Serie A debut at 16. Donnarumma left Milan for PSG this summer on a free transfer after making 251 appearances for the Rossoneri, which is outrageous for someone his age. He has also made 36 appearances for his country and will *touch wood* comfortably reach a century of caps for the Azzurri. This position was as straightforward as they come.

Right-back – Trent Alexander-Arnold (Liverpool)
Now, he might not be Gareth Southgate’s first-choice right-back, but he is mine, which is much more important in the grand scheme of things. Unfortunately for Alexander-Arnold, he missed Euro 2020 due to an injury, which probably saved Southgate from having a very bad selection headache or, even worse, heavy criticism from the media and fans alike, which could have derailed England’s impressive tournament.

Trent first made a name for himself after scoring a wonderful free-kick against Hoffenheim in a 2017/18 UEFA Champions League qualifier. He then played sporadically in the league and became first-choice in his position for Liverpool later on that season. An outstanding footballer – especially offensively – the 22-year-old has an absolute wand of a right foot and deserves this particular accolade.

Centre-back – Matthijs de Ligt (Juventus)
De Ligt has gone relatively quiet since his £77m move to Juventus in 2019, but first broke onto the scene as a teenager at Ajax. He only turned 22 last month, but it feels like he has been around forever. Whether his long-term future is in Turin remains to be seen, but the Dutchman has bags of potential and is still learning his trade. Not to mention, he is working alongside Giorgio Chiellini and Leonardo Bonucci, so if he can add some of their traits and sh*thousing abilities to his game, the sky really is the limit.

This position is probably the weakest in the team and as tempting as it was to include William Saliba to stir the pot (spoiler alert, he’s not the next central defender), De Ligt is the right, and slightly dull, choice.

Centre-back – Jules Kounde (Sevilla)
Keeping it European, Kounde will partner De Ligt in this team of young talents. If Chelsea fans weren’t sure if their team had missed out by not signing the Sevilla man, they better be sure now after seeing his name in this article.

The 22-year-old represented France at Euro 2020, looking a little bit out of sorts when he filled in at right-back for Les Bleus. However, he is an excellent talent and will likely get his move to the Premier League in the future. He has 91 appearances for Sevilla and helped the La Liga side win the Europa League in 2020.

Left-back – Alphonso Davies (Bayern Munich)
Yes, a player that is not 22 years of age or European, who’d have thought it? Davies was an easy choice for left-back despite slight competition from PSG’s latest signing: Nuno Mendes (the only honourable mention). He has three Bundesliga titles to his name, and I’m sure he’s not finished on that front given the lack of competition in Germany’s top flight. Furthermore, the Canada international was influential as Bayern won the UCL last year; just ask Nelson Semedo.

Davies could be regarded as the best left-back world football, let alone the best U23 one. He is a terrific footballer and one of the quickest players in the world. It would be a shame if he stayed in Germany for the rest of his career and would be an even greater shame if he is unable to help Canada reach a World Cup before hanging up his boots.

Centre midfield – Pedri (FC Barcelona)
The Euro 2020 young player of the tournament, Pedri is the first teenager in the team, and what a player he is for an 18-year-old. He played 52 times last season for Barcelona, before representing Spain at the Euros, then again at the Olympics before returning to Barca for 21/22 with basically no time off. Two games into the new season, he either plucked up the courage to ask for a few weeks off or realised he was bloody knackered and has been given a well-earned holiday.

Pedri and Frenkie de Jong could be in the Blaugrana midfield for years to come. But knowing the Catalan club, they’ll swap one of them for Adrien Rabiot in two years’ time in some dodgy swap deal.

Centre midfield – Declan Rice (West Ham United)
Potentially the first eyebrow-raiser in the team so far, Rice has made the cut to add a bit of balance to this hypothetical line-up. The 22-year-old is an excellent all-around player: superb on the ball, solid defensively, good in the air and a terrific passer with great range. He was another player who produced some fine displays at this summer’s European Championships. It’s just a shame England didn’t lift the trophy so Rice could enjoy his first pint of beer.

He has 134 Premier League appearances to his name already and 26 caps for the Three Lions. One of the most underrated ball carriers in the country, his influence on West Ham’s success last season cannot be emphasised enough. It would be pretty cool if he was to stay at the Hammers for the rest of his career, but it is highly unlikely. A move to Chelsea to play with his best pal Mason Mount seems inevitable.

Centre attacking midfield/No.10 role – Kai Havertz (Chelsea)
Havertz isn’t the sort of player to play in a central midfield role and is not similar to Rice or Pedri in the slightest, so it is important to emphasise his position in the team. Whatever you want to call it: attacking midfield, the No.10 role, he would play in between the lines and not part of a midfield three.

He joined Chelsea last summer for £72m after emerging as one of the best young talents in world football. He disappointed in his debut season until the UCL final against Manchester City, when he scored the only goal of the game. When asked about his hefty transfer fee after the game he simply said: “I don’t give a f**k”. Which was fair enough, and kind of admirable.

There is so much potential in Havertz’s game, and it is only a matter of time before he explodes for the Blues. Chelsea spent big this summer on Romelu Lukaku to make the German their second most expensive player ever and they are looking very good this season. His role in the team will be different in 21/22 and he will have better players around him, so it could be a big year for the 22-year-old.

Right-winger – Kylian Mbappe (PSG)
Probably the first player you can call ‘generational’ in this team, Mbappe has drawn comparisons to the very best (Thierry Henry and the Brazilian Ronaldo, mainly) ever since bursting onto the scene as an AS Monaco player in 2017. The 22-year-old has 135 goals in 175 matches for PSG as well as 49 caps for France, for whom he has netted 17 goals. He was incredible for his nation at the 2018 World Cup in Russia, scoring in the final and making everyone in the footballing world take notice, if they hadn’t already.

Mbappe has some very stellar competition for the right-wing position in the team, but it was a very straightforward decision. His future is currently uncertain, with his contract situation in Paris a huge talking point. His eventual move to Real Madrid seems unpreventable, but whether it will happen in January, next summer or five years’ time remains to be seen.

Striker – Erling Haaland (Borussia Dortmund)
Many words can be used to describe Haaland. Emphatic, relentless and robotic spring to mind immediately. His goal record is outrageous and is the only other ‘generational’ member of the team, in my opinion. He scored 29 in 27 for RB Salzburg, has 12 in 15 for Norway and 63 in 64 for Dortmund. He’s pretty good at football.

Haaland is another player with an uncertain future, but what is certain is that he will not be at BVB in a few years time. Chelsea seemed the most likely to land him, but their signing of Lukaku has thrown that out the window. A move to Manchester is probable, but the actual team is debatable. His future destination depends a lot on super-agent Mino Raiola as he will want a nice payday from his eventual transfer.

Left-winger – Phil Foden (Manchester City)
To conclude the team we have Phil Foden aka the ‘Stockport Iniesta’. At 21 years of age, he only has three Premier League, four Carabao Cup, one FA Cup and two Community Shield medals to his name. Pretty embarrassing, right?

Foden was part of the England team that reached this summer’s Euro 2020 final but didn’t feature heavily due to Bukayo Saka’s performances and his unfortunate foot injury. The Man City playmaker is an incredible talent who looks very elegant every time he touches the ball. Foden is the third English player in this team and there has been plenty of English honourable mentions, so the World Cup next year is pretty much in the bag.