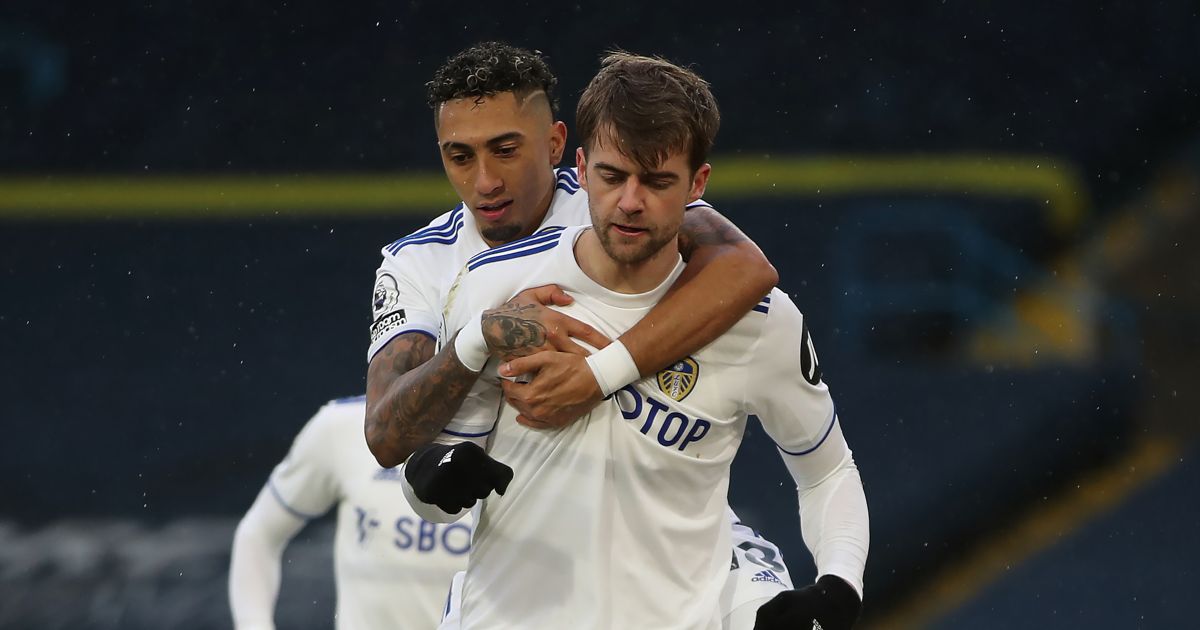 We have a Premier League XI – with two Villa and two Leeds representatives – without a single international cap between them. But one of them at least is likely to break that duck this week…

Goalkeeper: Emiliano Martinez (Aston Villa, not Argentina)
Called up but never yet capped is a Villa keeper picked by many as their goalkeeper of the season. He topped our list of 2020/21 keepers as he proved that Arsenal got things very, very wrong when they opted for Bernd Leno over the Argentine. His country has flitted from goalkeeper to goalkeeper since Sergio Romero opted for retirement at Manchester United so it is surely soon Martinez’s turn between the sticks as 34-year-old Franco Armani, Porto stopper Agustín Marchesín and Udinese man Juan Musso have all had a less-than-convincing whirl.

Right-back: Aaron Wan-Bissaka (Manchester United, not England)
“Aaron is a very good defender, one against one he’s probably as good as I have seen, but I have to look at the balance of the team and currently there are players ahead of him,” said Gareth Southgate in November. Bizarrely, the Manchester United man is only the fifth-choice English right-back as we are blessed with more options there than trustworthy MPs in 2021. An excellent one-on-one defender he may be, but have you seen him with the ball at his feet? Southgate clearly has.

Centre-half: Aymeric Laporte (Manchester City, not France and not yet Spain)
When the manager repeatedly prefers Kurt Zouma, it is probably time to admit that your chances of being called up by your country are slim. Whatever bouef Didier Deschamps has with Laporte – and it likely stems from him openly courting Spain even while being called up by France – it has left the Manchester City man believing he has no option but to switch allegiances. It’s just a shame for Spain that they get Laporte not quite at the height of his powers; he is so far down the City pecking order that he is reportedly eyeing the exit door.

Centre-half: Wesley Fofana (Leicester City, not France)
As England are calling up Ben White and Ben Godfrey, France are casually not calling up Laporte, Dayot Upamecano (who at least has three caps), Benoît Badiashile, new Liverpool man Ibrahima Konate and Wesley Fofana. Hell, Jules Kounde is uncapped and he is supposedly worth over £50m. Fofana has been excellent for Leicester City this season but that’s not good enough for France. It’s not really even good enough for France’s Under-21s. This makes us a little sad.

Left-back: Matt Targett (Aston Villa, not England)
In a clear sign that Jack Grealish is not a popular man in the Villa dressing-room, Targett has just been voted Aston Villa Players’ Player of the Year. It’s also a clear sign that Targett has been exemplary since signing for Villa from Southampton. An England Under-21 regular under Southgate, there were hefty rumours that he was due a call-up in March, but the return to form of Luke Shaw has seen England’s two left-back slots filled by two convincing candidates who will take some shifting.

Central midfield: Abdoulaye Doucouré (Everton, not France)
Mali have courted him time and time again but, even at 28, Doucoure believes that France could still come calling. It’s admirable, really. Unfortunately, his first season at Everton will have done little to convince Deschamps; like his club, he started like a train, limped in the middle and then flattered to deceive at the end. He and Everton will have to improve next season, though whether that will be enough to see him displace Moussa Sissoko is another question. Nobody can displace Moussa Sissoko.

Central midfield: Pascal Gross (Brighton, not Germany)
It’s over ten years since Gross last pulled on a Germany shirt, when he represented the Under-20s along with Norwich City pair Lukas Rupp and Marco Stiepermann. In truth, he never came close again – he was a jobbing Bundesliga midfielder before he came to Brighton in 2017 and somehow found his niche as a creator of great, oft-untaken chances. Only six Premier League players have created more chances per 90 minutes this season and only eight players have been credited with more than his eight assists. Oh and he takes a lovely penalty. 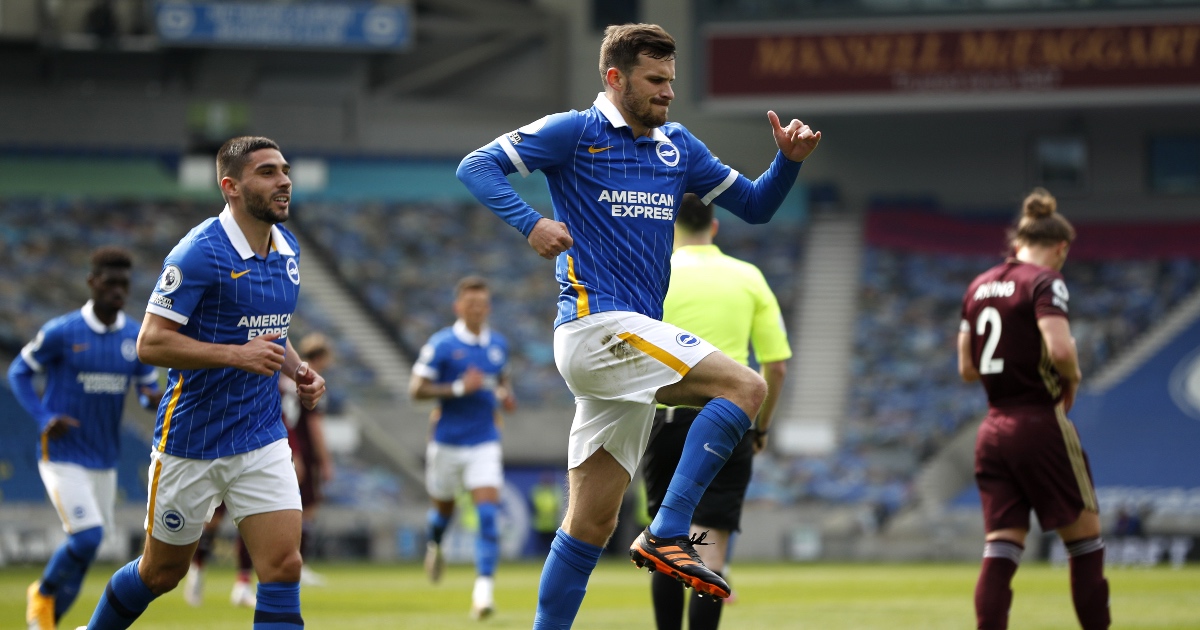 Attacking midfield: Raphinha (Leeds United, not Brazil)
“There’s no professional player who doesn’t think about representing the Selecao. It’s one of my dreams, of course, but I have no control if that’s going to happen or not,” said Raphinha as talk turned – in Leeds at least – to a surprise call-up for Copa America. It was fanciful talk as Raphinha has not been capped at any level by Brazil, but Richarlison was in a not-too-dissimilar position three years ago and now has eight goals in 23 Brazil games and is verging on being undroppable.

Attacking midfield: Allan Saint-Maximin (Newcastle United, not France)
King of the Premier League dribblers (his 5.5 per 90 puts him just ahead of Adama Traore), Saint-Maximin remains ignored by France, who would probably like to see a little more end product than the three Premier League goals and five assists he mustered this season, in between spells on the sidelines with injury and illness. His chances of a call-up would certainly improve if he secured a rumoured move to Arsenal, who have boasted about four gazillion French internationals.

Second striker: Michail Antonio (West Ham, not England)
There have been conflicting reports about his apparent decision to switch allegiances to Jamaica after call-ups to the England squad resulted in nothing more than a place on the bench. At 31, he is incredibly unlikely to get another nod from Southgate, even after a second successive ten-goal Premier League season, but he is probably more than happy to simply be an established Premier League player ten years after he was playing League One football.

Striker: Patrick Bamford (Leeds United, not England)
As the Premier League’s second-top-scoring Englishman, Bamford can feel a little aggrieved that he has not yet been called up by Southgate, but the 50-50 choice went Ollie Watkins’ way in March and a goal on the Villa man’s debut meant that the England coach saw no reason to change his mind. For the moment, he is ruling out an Ireland call-up (he was approached because of a grandparent) but watch this space; decisions can change as players edge towards 30.