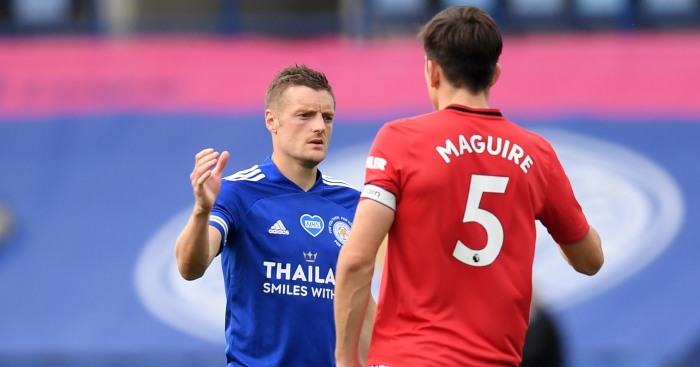 Game to watch: Leicester v Manchester United
First, we have to get something off our chest. It doesn’t feel right when the Boxing Day fixtures fall on a Saturday. The Boxing Day schedule is supposed to be a great big daft festive bonus where anything can happen, not just another Saturday of football. I know it’s not the biggest problem with Christmas this year. I know you can’t see your families. I know the whole of Kent literally stinks of piss. But Boxing Day’s football just being a regular lockdown Saturday doesn’t sit right with me. There, I said it.

That said, we can’t really grumble about a clash between second and third to kick things off. Manchester United, against all odds, look like a proper football team. Since the 1-0 defeat to Arsenal – in its way far more humiliating than the 6-1 against Spurs – United have taken 19 points from 21 to propel themselves towards the most unlikely of title tilts. And they’re into the Carabao semi-finals. We’ll say no more about the Champions League. But still. It’s quite the transformation.

Here they put their formidable record of always falling behind in away games yet still winning to its toughest test at Leicester, who gave Tottenham what for last week to leapfrog sinking Spurs in the table.

But just as United have been heavily reliant on their away form to lift them up the table, so too have Leicester. They have, frankly ludicrously given their lofty position in the table, already lost four home games this season. And not against stellar opposition, either. Everton are perfectly good, while West Ham and Aston Villa are competent, but you’d still not want to lose any more than one of those games really, at home. And you definitely don’t want to be losing home games to Fulham.

In summary, then, a team that is weirdly fragile at home against one inexplicably resilient away. Ergo, home win. Because Boxing Day. Even though it’s just Saturday.

Team to watch: Newcastle
A quick look at the table suggests all is reasonably fine at Newcastle, safely ensconced in that congested mid-table. They’re only three points behind West Ham with a game in hand, comfortably nearer the top half than the bottom three. But there’s a nagging sense that things could go very wrong very fast here.

They were lucky to get a VAR-assisted point at home to Fulham on the weekend, handed a dubious penalty and one-man advantage to get back on level terms and then doing precious little in the last 30 minutes to try and turn that one point into three. Then passed up a huge opportunity to reach a semi-final when losing 1-0 in the Carabao to a Brentford side that didn’t even play particularly well themselves.

They’ve now got a nightmare fixture list to contend with, and they hit that run of games in miserable form. It’s a trip to Manchester City on Boxing Day, and that’s followed by games against the current top two. Nasty.

Player to watch: Erik Lamela
We don’t agree with Jose Mourinho on everything, but we share his fondness for Spurs’ Argentine Destroyer of Worlds and Crusher of Dreams.

Lamela is, we accept, something of an acquired taste, but he is also the one player within the Spurs squad who didn’t need to learn anything from the infamous “intelligent c***s” speech. And his return from an 11-match injury absence could not be better timed, coming as it does at the precise moment Spurs have lost both intelligence and c***iness from their play.

Lamela stepped off the bench after Spurs had been pegged back to 1-1 in their Carabao quarter-final at Stoke on Wednesday. Fourteen minutes after his introduction, Spurs led 3-1 and the job was done. He gets results. Tottenham have won eight and drawn two of the 11 games Lamela has been involved in this season – and one of the two draws was against Chelsea in the Carabao Cup when Lamela scored Spurs’ equaliser and again in the penalty shootout success. Spurs have won only seven of 14 games without him. Spurs should be back to their c-word best at Wolves this weekend.

Manager to watch: Mikel Arteta
Terrible results and starting to sound more than a touch desperate with his bad maths. His wretched, beleaguered Arsenal face Chelsea in need of something approaching a festive miracle to get a first win in eight Premier League games. Arteta and Arsenal fans must cling to the memories from the FA Cup final, when they had a plan and executed it perfectly to deservedly claim a trophy that has set up a second home at the Emirates. It really wasn’t that long ago. There must be something still there. Surely.

If nothing else, just send the players out to play. Treat it as a free roll of the dice before the all-important six-pointers against Brighton and West Brom. That’s where Arsenal are now.

But you do worry for Arteta. Not only as he started to sound like a condemned man just waiting for the axe to fall, there is little in Arsenal’s performances to offer encouragement. What coaching is actually happening at Arsenal? There is no cohesion or organisation to the porous backline, no sense of a plan in attack beyond pumping in those pure maths crosses and waiting for the luck to change. It needs to happen soon.

Fans to watch: Liverpool
Because they are the only top-flight fans you’ll be able to see in this round of games. From Boxing Day, Anfield and Goodison are the only Premier League grounds where any fans will be permitted. #Tier2Ultras

Football League game to watch: Watford v Norwich
Norwich seem to have taken on the Leeds role of being the Championship team that is never off the box. Like sh*t in a field, the Canaries are everywhere. And like Leeds last season, Norwich are justifying the love. They’ve won five in a row now – and eight in 10 – to open up a five-point lead at the top of the table. And there’s been an efficiency to their recent work. Four of those wins have been by a 2-1 margin before they broke with tradition and beat Cardiff 2-0 last week. Watford, meanwhile, find themselves with a new manager, which is genuinely a more frequent occurrence than Boxing Day. Seems a bit of an overreaction to a 2-0 defeat at Huddersfield, but there we go. Things are hardly disastrous for the Hornets, who sit fifth on 34 points, but like the Premier League it’s a congested old table where a couple of iffy results can cause a plummet. Eight points separate third from 13th heading into Christmas.