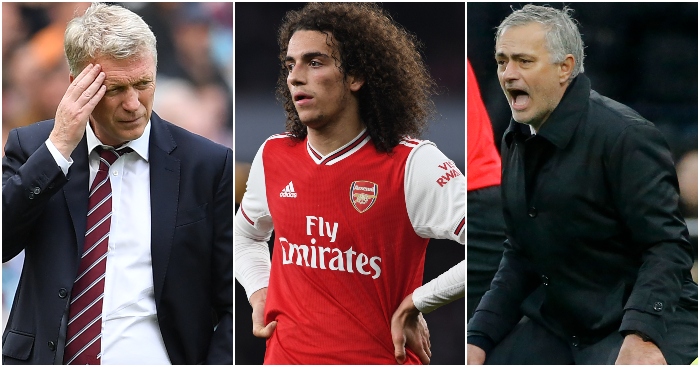 Game to watch – Arsenal vs Manchester United
Arsenal were generally better against Chelsea, but it was alarming just how quickly and familiarly it all fell apart. Yes, Bernd Leno was individually responsible for the equaliser, but his side had ceded control of that game long before he missed Mason Mount’s cross. A goal had been coming. Maybe not like that, but it had been coming and Mikel Arteta seemed helpless to change that momentum.

The bigger issue, then, is whether Arsenal were technically and structurally improved, or whether they just worked harder. They played with more life than at any other point this season, credit Arteta for that, but isn’t that typical anytime a new head-coach takes charge? New ideas bring vigour, but praising technical improvement straight away always feels premature and almost like a form of wilful denial.

United might actually be on the mend. As the over-praise of the win against Newcastle showed, they’re starting from a very low base, but there was still encouragement to be taken from that Boxing Day victory and more still in the 2-0 win over Burnley. No, Turf Moor isn’t actually a tough place to go, Burnley are routinely dreadful there against top opposition, but there lies the achievement: United looked like a top side again and held them at arm’s length.

What will be interesting is seeing how they cope with Arsenal’s attacking range. Just by bringing Mesut Ozil and his delicate passing angles back into the side, Arteta has made his team that much more diverse and, in this game, will present United with a type of player that they haven’t had to cope with in either of their games since Christmas.

They’ll want to play deep, to sit and wait for their chances to counter, but given that domination of the ball is exactly what Arsenal want – their performance against Chelsea only started to stutter when they were denied possession – United will likely have to elaborate on that singular tactic if they’re to keep this run going.

Player to watch – Matteo Guendouzi
Find footage of Tammy Abraham’s goal at the Emirates and watch Guendouzi’s effort to keep up with the play as Chelsea break. In the days since, Arsenal fans have zeroed in on Shkodran Mustafi’s role in that goal and dragged him over the coals. Understandable, perhaps, given his Roger Johnson impression, but it’s strange not to see any criticism of Guendouzi.

Not that he was really culpable for what happened, but it was a fairly meagre effort to keep pace. Maybe he wouldn’t have prevented the goal, but he could still have had an effect on the move or applied some pressure to either Willian or Abraham. But with the game on the line and everyone around him sprinting towards the other end of the pitch, he barely broke out of jog. A strange look for a player whose reputation seems to partly depend on his image as a passionate artisan, full of craft and heart.

But perhaps Guendouzi has actually been over-estimated? He looks the part and plays just enough nice passes to be credible, but he’s one of those players who puffs up his reputation with bluster. He makes enough angry faces and waves his arms around, but when it actually matters he doesn’t quite have the necessary substance to be a proper asset. Is that harsh? Possibly, but in those few seconds on Sunday he was the perfect, pejorative Arsenal cliche, of a player passing the buck and then making accusing gestures at his teammates.

Would Fernandinho have allowed Abraham to gallop away like that? Would Henderson or Fabinho? Never. Chelsea might still have scored, but there would have been a challenge.

So this is a chance for Guendouzi to fire back and make this look like an overreaction. Most likely, this game will put him in opposition to Paul Pogba in one way or another and that, of course, has a national significance back in France. Given how United like to score goals away from home, the result will also depend – in part – on his ability to guard against the counters that Arsenal let through their midfield gates on Sunday.

Is he actually a dependable player at this level, or just an evolved Mark Noble with better hair?

Team to watch – West Ham
These players are out of excuses now. Manuel Pellegrini had his faults, Mario Husillos doubtless did too, but at the root of West Ham’s issues were the many individuals playing within themselves. Haller, Anderson, Diop, Yarmolenko; they don’t belong anywhere near 17th place, but that they find themselves at the foot of the table describes the broken dynamics of the club.

If you recruit from above your means and use big contracts as an incentive, don’t be surprised when those players mentally shrink during the harder parts of a season and play as if the club’s future is somebody else’s problem.

Unfortunately, these are largely the same players who will be responsible for David Moyes’ second first impression. A lot of supporters don’t want Moyes back anyway and they’ll be even less welcoming if his first game ends in defeat to Bournemouth and a slide into the relegation zone.

Long term – yes – recruitment has to change and these expensive deals have to be replaced by method which bears more scrutiny. But for now, this predicament is the player’s responsibility and their aberration to put right.

Manager to watch – Jose Mourinho
Tottenham are not good. The Premier League table may claim that they’re improved, but they’re just bad in a different way.

Most noticeably in attack, where their creativity has shrunk to almost zero since Mourinho took charge. The effect has been to make Spurs borderline unwatchable at times, but also overly dependent on long balls from the centre-halves which, more often than not, competent defences are able to cope with easily.

The context for this is Mourinho’s past and the miserable side he authored at Manchester United. They were slow, unimaginative and, when the option was available to them in 2016, hopelessly dependent on Zlatan Ibrahimovic’s unique abilities to change games. There was almost nothing else to them. They hunted mistakes and could counter-attack quite effectively, but when the emphasis was on them to create they had almost nothing beyond that single tactic.

At the moment, Tottenham are becoming that side. A more talented version in a nicer stadium, admittedly, but already with many of the same issues. Definitive judgement of Mourinho still lies a long way in the future, of course, but symptoms of this disease are already presenting. Maybe it’s just the general chaos and confusion which comes with a change of a manager, but across these last few games especially it’s seemed worryingly by design.

Beating Southampton is important and would be a good response to disappointment at Norwich. But Mourinho must also start to prove that he has some ideas for this team’s attacking future and that he isn’t just the same tired old mind in a brand new suit.

Championship game to watch – West Bromwich Albion vs Leeds United
First versus second, Bielsa versus Bilic. Level on points, separated only by goal-difference.

Leeds’ win over Birmingham City was and will remain one of the most remarkable games of the season and described the knife edge that Bielsa’s team are playing on at the moment. For West Brom, their defeat to Middlesbrough couldn’t have come at a worse moment, denying them this chance to potentially go six points clear.

This should be excellent.