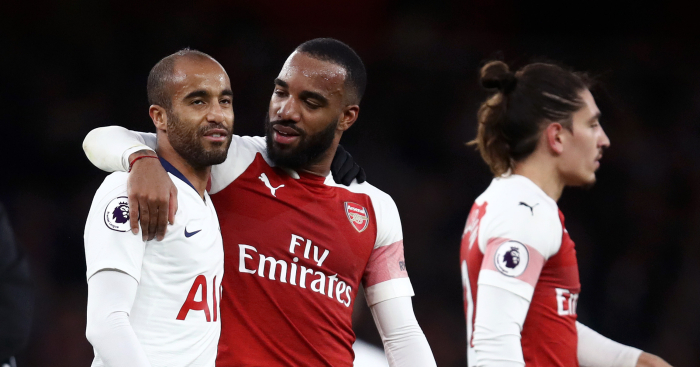 Game to watch – Arsenal v Tottenham
What a difference just over two weeks make. Arsenal took laborious claims of a permanent north London power shift as a personal affront at the start of the month. A side in its relative infancy under Unai Emery stood up to Mauricio Pochettino’s fully-developed Tottenham and not only lived to tell the tale; they earned the right to the royalties.

That 4-2 victory lifted Arsenal above their bitter rivals in the Premier League, shifting momentum completely and re-balancing a rivalry that had long become one-sided. But it appears to have spoiled the victor and completely galvanised the loser.

Arsenal have played four times since, beating Huddersfield and Qarabag 1-0, drawing against Manchester United and losing to Southampton. Their last defeat preceded a 22-game unbeaten run, but only the most optimistic supporter would expect a similar response from this squad during such a busy schedule.

Tottenham have also played four times since, beating Southampton, Leicester and Burnley, and earning a famous draw at the Nou Camp to secure unlikely Champions League qualification. After falling behind Arsenal on goal difference following their fourth defeat of the Premier League season, they are now five points clear of them in third.

Their next task is to inflict something approaching revenge. To beat Arsenal in the League Cup would not completely undo Premier League defeat, but it would be something: like discovering your wife has been cheating on you and then keying her new lover’s car. He might keep your wife but how silly does he look now with that scratch down the side of his car?

This is by no means a match that means nothing. It is a League Cup quarter-final, a fine opportunity for either side to greatly improve their chances of winning a trophy. For Emery to do so in his first season would be a fine effort. For Pochettino to do so at all would be invigorating. For either to do so having beaten their closest rivals en-route would be wonderful.

But it remains the lowest priority for two sides staring down the barrel of a squad stretched by festive fixtures, European knock-out football and the FA Cup’s return next month. A two-legged semi-final is hardly the most appealing of rewards.

As ever, the League Cup will only carry any importance for the elite when the finish line is in full view. If the winner of this tie draws Burton next and reaches the final, they will look back on this quarter-final and be grateful they made it through. But if Manchester City and a gruelling two-legged defeat is the prize, the loser will be thankful to have avoided such a fate.

It is, in effect, a game and a result that can only be judged in hindsight; there should be no immediate, meaningful conclusions. But it is still a north London derby, a match between Arsenal and Tottenham, with vague hopes of silverware on offer for the winner. And that elevates it beyond a typical quarter-final.

Player to watch – Kevin de Bruyne
Almost exactly 12 months to the day that Manchester City beat Leicester in the quarter-finals of the Carabao Cup at the King Power Stadium, Pep Guardiola takes his side to the same stadium to face the same team at the same stage of the competition on Tuesday,

They will hope for a similar outcome, minus the extra-time and penalties needed to overcome the Foxes last December. Then, Riyad Mahrez missed the vital spot-kick to send his future employers through.

As the sixth of nine December fixtures, City’s expensive and talented squad is already being pushed to its limits. Four players have already exceeded 2,000 minutes this season. And so the return of Kevin de Bruyne is certainly opportune.

There is no bad time to welcome back such a supreme talent, of course. The Belgian had been sidelined since suffering a second knee ligament injury of the season in the last round, only making his return as a late substitute against Everton. He has played just 251 minutes this season.

Guardiola described it as “important” that De Bruyne plays in midweek, and you can see why. As utterly dominant as City have been, they have missed their talisman at times. They could not breach the Wolves door without their lockpick, failed to sweep Liverpool away without their master broomsman, and slipped against Chelsea without the balance and poise of the midfielder. He needs to reach peak match fitness as soon as possible.

Leicester is the first step towards not only personal recovery, but collective rehabilitation. If you thought City were ridiculous before, wait until their best player is actually available.

Manager to watch – Claude Puel
Hindsight looks kindly upon Claude Puel’s solitary season in charge of Southampton. The club’s struggles since sacking the Frenchman after finishing eighth and reaching a cup final have added numerous coats of gloss to what was actually a horribly underwhelming 12-month paint job. Saints were only six points above 17th-placed Watford come May, and scored fewer goals than all but the bottom five.

Their run to the League Cup final might have given Puel credit in the bank, but it was not to be. Southampton battled back from two goals down against Manchester United at Wembley in February 2017 to equalise through two Manolo Gabbiadini goals, only for Zlatan Ibrahimovic to win it in the 87th minute. With that, the club’s first piece of silverware in 41 years had slipped through their fingers.

That, remarkably, remains Puel’s only defeat in a secondary domestic cup competition over 90 minutes since January 2014. It is an admittedly difficult achievement to sell on the C.V, but there are few better in the business than the 57-year-old when it comes to doing quite well in a tournament no-one really cares about. He was knocked out of the Coupe de la Ligue on penalties in his last two seasons with Nice, beat Arsenal and Liverpool (twice) en route to the League Cup final in 2017, and was beaten on penalties again last season after a draw with Manchester City.

The same opponent stands in the way of another unlikely run that could well mask under-performance and inconsistency in the Premier League. Does anyone have odds on Leicester finishing eighth and reaching the League Cup final?

Team to watch – Bournemouth
Five current Premier League teams have never won a major trophy. Brighton cannot persuade anyone that their 14 Sussex Senior Challenge Cup victories are of any real relevance, while Crystal Palace’s 1991 Zenith Data Systems Cup similarly counts for nought. Fulham found the 2010 Europa League final a step too far in terms of emulating their famous 2002 Intertoto Cup win, and Watford have won a handful of second, third and fourth division titles, but little else.

Each of those clubs have already exited the League Cup, which leaves Bournemouth flying the flag for unfancied Premier League sides. They are in no danger of relegation, yet are too far behind those chasing the European spots to catch them. Without having to look either up or down, the Cherries can keep their gaze on what is straight in front of them. For now, that is a potentially distracted Chelsea.

Bournemouth are sixth-favourites in the betting to win the League Cup, but in reality are one of perhaps just two clubs who can afford to prioritise it. Manchester City have their eyes fixed on an actual Premier League title race, Arsenal, Chelsea and Tottenham are all vying for Champions League qualification, while Middlesbrough and Burton have much bigger fish to fry in their respective leagues. Bournemouth and Leicester have nothing on their plate, so could look to indulge at the League Cup buffet.

Leicester have had their fill with a Premier League title, of course, and so Bournemouth’s hunger could prove invaluable. Their rise under Eddie Howe has been stratospheric, but it would mean that much more if something tangible could be found at the end of the rainbow.

Other team to watch – Middlesbrough or Burton
One of them will be in a League Cup semi-final and that’s just lovely.

European game to watch – Bayern Munich v RB Leipzig
Fear not, Liverpool fans, for there is some football to keep you occupied this midweek before Friday’s trip to Wolves. Your two-month scouting assignment on Bayern Munich starts now.

Liverpool have every reason to see this as a favourable Champions League draw. Bayern will not roll over – most certainly not for former nemesis Jurgen Klopp – but they are nine points off the top of the Bundesliga and have lost three games already. Niko Kovac continues to fight against the tide of public opinion in a difficult season for managers of the established European elite.

After no league wins in November, Bayern are back on track with three consecutive victories in December. Werder Bremen, Nurnberg and Hannover have been swept aside in emphatic fashion, yet only so much can be read into those results. They are ninth, 17th and 18th in the Bundesliga respectively.

Fourth-placed RB Leipzig, two points behind Bayern, will provide a much more accurate reflection of where Germany’s perennial reigning champions stand. They have scored 28 goals to Bayern’s 32, but conceded 14 to their 18. Ralf Rangnick’s side have also lost just twice in the Bundesliga since their opening-day defeat to Borussia Dortmund, but those two defeats have come in their last four games.

The loser can bid farewell to any already strained hopes of winning the title. The winner can, at the very least, establish themselves in the top four. A draw serves neither particularly well. Their last three meetings have ended in a win each for either side and a draw. For fu…