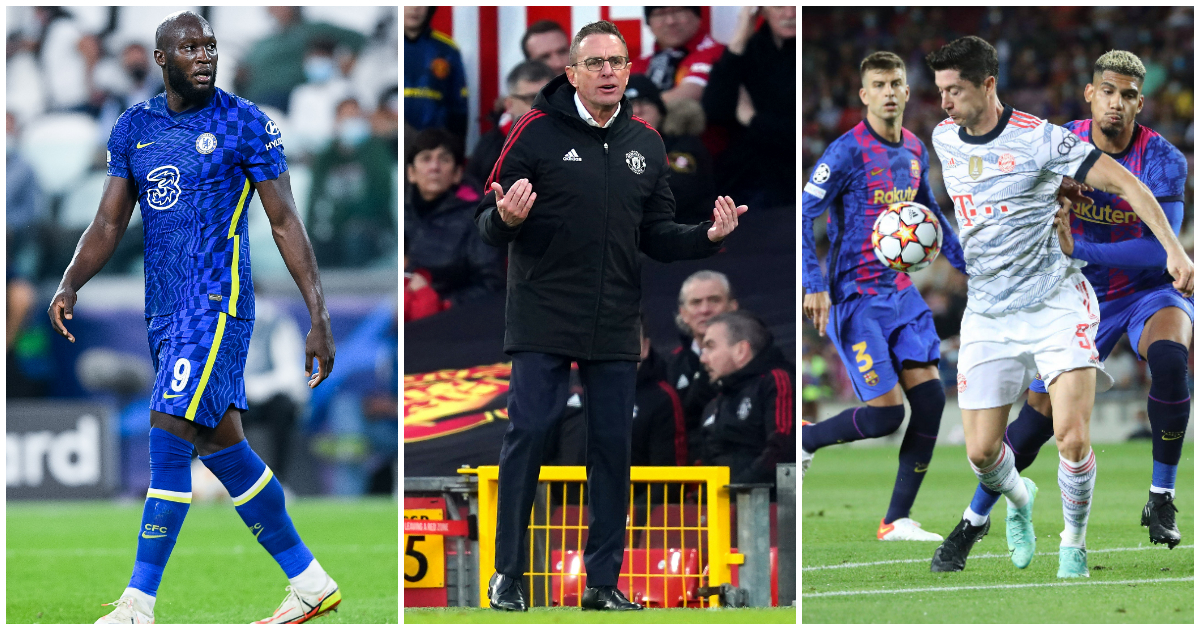 Premier League clubs are already assured of a last-16 place but Barca could be in bother. Still, we get another glimpse of Ralf-ball while Leicester embark upon a huge Europa trip…

Game to watch – Bayern Munich v Barcelona
It’s hardly a super massive midweek for the Premier League representatives in the Champions League. Liverpool have p*ssed the group of death; likewise, City and Manchester United have top spot tied up. If Chelsea match Juve’s result on Wednesday, the holders will also progress as group winners.

So for some final matchday jeopardy, we look towards Germany, where Barcelona could fail to reach the knockout stages for the first time in 20 years. The last time they fluffed it, they finished behind AC Milan and David O’Leary’s Leeds United.

To be sure of avoiding embarrassment, Barca just need to go to all-conquering Bayern Munich and win. If not, they are left hoping bottom-placed Dynamo Kiev can do them a favour by taking points off Benfica.

The situation could have been even more perilous for Barca. Had Haris Seferovic not come up with a miss of the season contender in added time at the Nou Camp a fortnight ago, Benfica’s fate would have been in their own hands and Barca would need snookers.

Instead, Barca just need to worry about Bayern. They know what the Bavarians are capable of after the opening matchday when Julian Nagelsmann’s men barely broke sweat while winning 3-0 at the Nou Camp. It was hardly another 8-2 but the chasm in quality remains as wide as ever.

A couple of positives for Barca to cling to: Bayern’s home advantage is relinquished somewhat by the ban on supporters attending the game because of Covid concerns in Bavaria. And with the group sewn up, how motivated are Bayern and Nagelsmann to go full beast?

This Barca currently cannot compete with a full-strength Bayern – not many sides can – and the hosts topped up their confidence reserves with a hard-fought 3-2 victory at Borussia Dortmund on Saturday that kept them at the Bundesliga summit. Barca, in contrast, lost 1-0 at home to Real Betis, their first defeat under Xavi, to languish in seventh, 14 points off Real Madrid at the top.

Xavi needs this – but not as badly as Joan Laporta needs this.

Manager to watch – Ralf Rangnick
In just one or two training sessions, Ralf Rangnick has already planted the pressing seeds at Old Trafford, if the opening half-hour against Crystal Palace is anything to go by. United faded and struggled to rediscover their stride after the break, but there were certainly reasons to be positive for the new manager as he begins the process of turning a flaky squad into a pack of relentless, double-hard gegenpressing b*stards.

That’s the most they’ve done so in a Premier League match since Sir Alex Ferguson retired.

What an impact Ralf Rangnick has made already! 📈 pic.twitter.com/z1rigMRwnb

Next, the interim manager can be grateful to the interim-interim, with the win at Villarreal earned by Michael Carrick in his first game in charge allowing Rangnick something of a free hit against Young Boys at Old Trafford.

Rangnick could use the opportunity to take a look at United’s fringe players while allowing some of their regulars a breather from all that chasing they aren’t accustomed to, but the German has to find the balance between freshening up and further moulding his best XI in the image he wants to see.

And already, some of the players snug in Ole Gunnar Solskjaer’s XI’s have been served notice by the new regime. Aaron Wan-Bissaka’s place is under threat from Diogo Dalot while Luke Shaw has had to watch Alex Telles make a positive impression in his left-back spot.

Some of the faces may be different from Sunday, but Rangnick will expect the changes to be seamless.

This is the Premier League era of the super manager

Team to watch – AC Milan
Liverpool are one of three teams – with Bayern and Ajax – looking to replicate the achievement of a magnificent seven to have gone through a group stage with a 100% record. To do that, they must p*ss all over Milan’s chips at the San Siro.

Milan are buoyant right now. They moved to the top of Serie A at the weekend after their 12th win in 16 league games this season and they go into the Liverpool clash in a position they could barely have anticipated after losing their first three group matches.

But a draw with Porto and a late win at Atletico leaves them in with a shot, hoping that a win over the Reds will be enough with Porto and Atletico facing each other in Portugal.

Stefano Pioli fancies his side’s chances. “We know Liverpool will inevitably cause us some issues but the spaces can open up for us too, because they are certainly not unbeatable or impenetrable in defence.”

Milan know that from scoring twice at Anfield on matchday one, even if they conceded three. Klopp rested some of his key names that night and he looks likely to do the same again ahead of the Christmas programme, with Diego Simeone’s irritation merely an unintended consequence, no doubt,

Europa League game to watch – Napoli v Leicester
Milan leapfrogged Napoli to go top in Italy, while Leicester had their own weekend to forget. Both clubs have to switch focus to their European ambitions, with each facing three potential outcomes.

A win would put Leicester into the knockout stages, while a draw would be enough to seal a play-off place – the runners-up in each group face the third-place teams in the Champions League groups for a spot in the last 16. Defeat would likely leave the Foxes in third and facing a play-off to go into the last 16 of the Europa Conference League.

Victory against a Napoli side beset by injuries – Kalidou Koulibaly and Victor Osimhen are both missing – would ease some of the pressure on Brendan Rodgers while his side languish in the bottom half of the Premier League. Leicester look in need of something to kickstart their season and beating the recently-deposed Serie A leaders could be it.

Of course, not curling up into the foetal position upon the concession of a set-piece would help too.

Player to watch – Romelu Lukaku
This is a testing time for Thomas Tuchel and Chelsea. The 3-2 defeat at West Ham leaves the Blues with only two wins from their last five matches while injuries aren’t helping the manager’s mood.

To protect their place at the summit, Tuchel needs to drag the Blues beyond their blip. With Juventus facing Group H whipping boys Malmo, it is likely only a win will do when Chelsea go to Russia to face Zenit on Tuesday at 5:45pm.

What’s the holders’ problem? You could attribute the London derby defeat to individual errors, which managers can do little to legislate for. But Chelsea certainly seem to have lost some of the fluidity that enabled them to set the domestic pace.

Lukaku’s return may help if the striker is fit. Tuchel admitted that he did not want to trouble Lukaku on Saturday but Kai Havertz’s injury gave him little choice. Lukaku will surely start in Russia since to get into his groove, the Belgian usually needs time, which is something in short supply with the title race so fierce.

Lukaku’s last goal came against Zenit in September. Tuchel needs to get his leading frontman up to speed and quick, not just for the sake of winning the group.

EFL game to watch – MK Dons v Plymouth
The Championship puts its feet up this midweek, leaving League One to take top billing on Sky Sports, with sixth hosting fourth on Wednesday night, after ninth-placed Portsmouth face Sheffield Wednesday just above them on Tuesday.

They arrested that slump with a win over Rochdale in the FA Cup on Saturday but Argyle could be leapfrogged by MK Dons if they lose on Tuesday at the start of a run of six games in 24 days. By Wednesday night, they could drop out of the play-off zone if Sunderland and Oxford win. Lowe has been very keen to emphasise that the Pilgrims were overachieving during their stint at the top but expectations have now been raised.