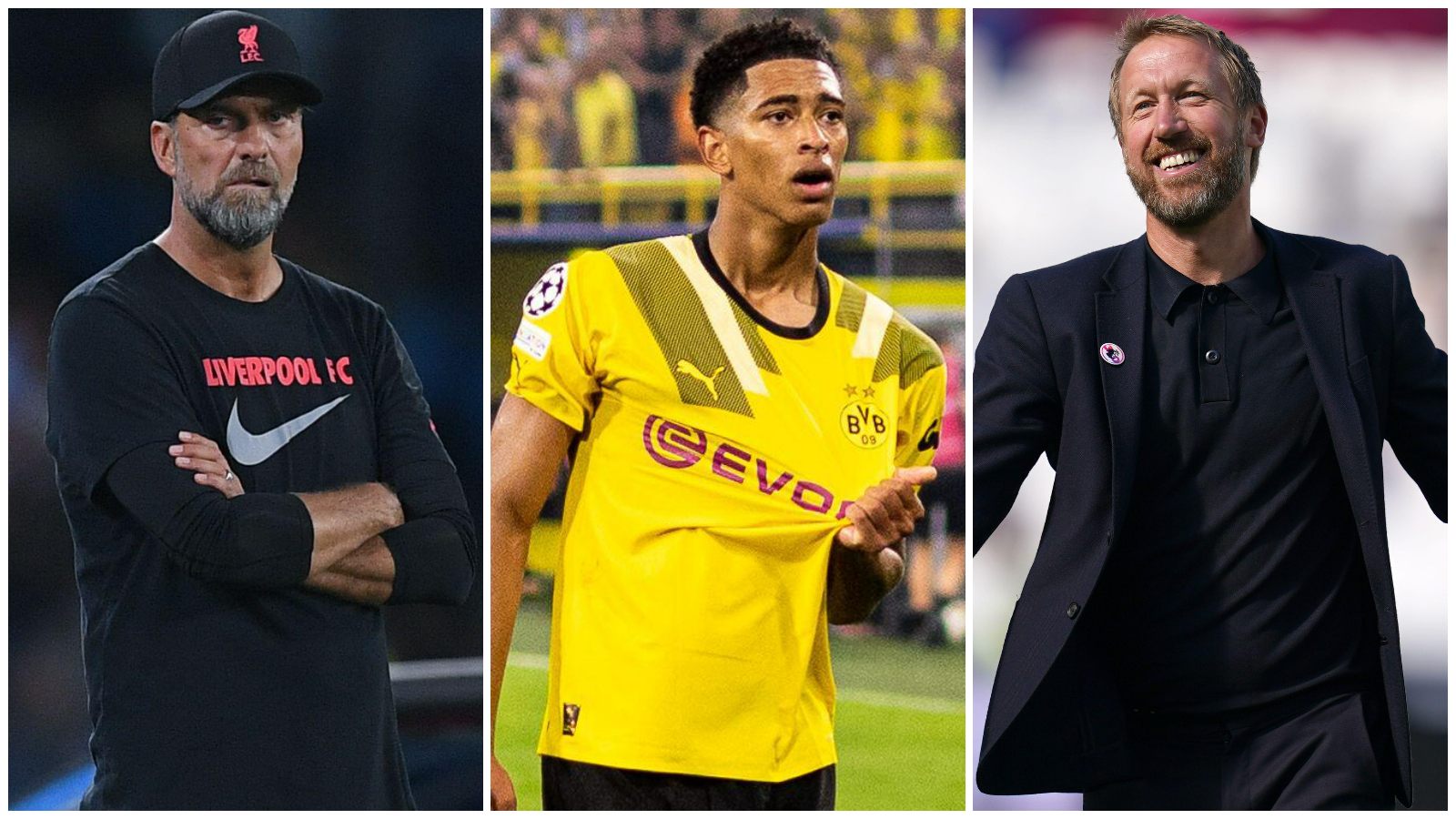 Jurgen Klopp expects a reaction from his Liverpool players after they embarrassed themselves at Napoli. And the Graham Potter era starts at Chelsea…

Game to watch – Liverpool v Ajax
Last week, Jurgen Klopp felt the need to apologise to Liverpool fans for their performance at Napoli. It was a necessary gesture after “the worst performance of my reign”. A ‘horrow show’, he called it. On Tuesday, Ajax arrive at Anfield offering the Reds the opportunity to make amends.

Klopp also spoke of the need to ‘reinvent’ his side, which seems ambitious in the six-day turnaround since being run ragged in Naples. Changes, though, are certain to happen as the manager attempts to provoke his side into showing some of the intensity that made them one of Europe’s most-feared sides.

The return of Thiago will help. Liverpool’s midfield has been a shambles of late and while the Spanish string-puller might not prompt a huge defensive improvement, at least going forward, the front three might not be quite so starved.

Darwin Nunez is ready to feast on Thiago’s gifts and the new boy is already eager to atone for his brain fart in being sent off against Palace that resulted in a needless three-game suspension. At the back, though, is where Klopp needs to find the quickest answers.

One could be to drop Trent Alexander-Arnold. The right-back has been a shadow of himself this season and opponents are preying on his defensive vulnerabilities. Joe Gomez, woeful himself against Napoli, could offer more stability against Ajax, even if Liverpool will miss Alexander-Arnold’s attacking contribution. It is a precarious balance for Klopp but Alexander-Arnold’s recent dip in form cannot be allowed to continue.

In contrast, Ajax enjoyed a stellar start to their group campaign when they pummelled Rangers 4-0. Liverpool faced the Eredivisie champions two years ago but this is a different side, with a dozen different players under a new manager, if not an entirely alien challenge. Back then, Liverpool earned a pair of narrow 1-0 wins, one coming courtesy of a scruffy own goal. Klopp will happily take the same again at Anfield.

Manager to watch – Graham Potter
The weekend’s postponements gave Potter a few more days to get his feet under the table at Stamford Bridge before his first game in charge of the Blues. On Wednesday, against, RVB Salzburg, we’ll get our first glimpse of what a Potter-led Chelsea might look like.

At first, it’ll probably be a lot like Thomas Tuchel’s version of the Blues. Given time, Potter wants to create a team “that’s about winning, a team which competes, is honest and works together, it’s a combination between football and human values”. Which is admirable, but such a holistic approach cannot be implemented in five sessions. Certainly not at Chelsea, where self-interest was evident in the final days of the old regime.

Those on the periphery at Chelsea will see Potter’s arrival as just the opportunity they need. The likes of Kepa, Hakim Ziyech, Christian Pulisic and Armando Broja are sure to get the arm around the shoulder they may have craved from Tuchel and many may get the opportunity to play for their Chelsea futures.

Kepa came in last week for Tuchel’s final game, partly perhaps because of rotation, but Edouard Mendy’s start to the season gave Chelsea’s defence the jitters. The world’s most expensive keeper could be more Potter’s kind of keeper and he needs to grasp this opportunity with both hands, rather than drop another b*llock.

Potter’s and Tuchel’s tactical approach don’t wary wildly – Potter’s adaptability is perhaps the biggest contrast – but the visit of Salzburg gifts some players the chance to prove their usefulness.

Player to watch – Jude Bellingham
Erling Haaland will doubtless enjoy a pleasant reunion with his old Dortmund colleagues on Wednesday night shortly before he sets about tearing them to pieces.

Perhaps it doesn’t matter that Dortmund have given the City goal machine even more motivation to add to his dozen goals in eight games so far for Pep Guardiola. Haaland already looks as deadly as anything the Premier League has seen. But Dortmund’s defenders might not thank their sporting director Sebastian Kehl for calling their former team-mate a ‘burden’.

Dortmund’s defence is hardly in the best shape right now to be facing a striker currently averaging 1.86 goals per 90. They shipped three to RB Leipzig at the weekend as Marco Rose inflicted some revenge on his former side. Bellingham couldn’t say much else in the circumstances but the midfielder admitted Dortmund ‘deserved to lose’.

The midfielder will be front and centre of their efforts to bounce back at the Etihad. Bellingham will be partly responsible for ensuring Haaland doesn’t receive the service he is becoming accustomed to while getting to grips with England colleagues Jack Grealish and Phil Foden.

Going forward, Bellingham already has previous for piercing City’s defence. He netted against the champions last year when Guardiola was prompted to call him ‘a liar’ for claiming to be 17 while bossing team-mates and opponents alike.

Aside from Dortmund’s cause, Bellingham might also be concerned with catching Gareth Southgate’s eye. There is no doubt over his place in the England squad for the World Cup, but emerging on top of another battle with City’s midfield could enhance his prospects of starting in Qatar.

Team to watch – Manchester United
Odd occasion though it was, coming less than a couple of hours after the Queen’s death had been announced, the defeat to Real Sociedad last Thursday served as a reality check for Manchester United and a reminder for Erik ten Hag of the magnitude of the work ahead.

Four Premier League wins on the bounce, including victories over Liverpool and Arsenal, suggested the United players were catching on quicker than it seemed from their opening couple of defeats. But in their Europa League opener was evidence that the Red Devils still need more time to acclimatise themselves to Ten Hag’s demands.

Cristiano Ronaldo toiled in attack while Casemiro failed to get a grip of the midfield on his full debut. Both were likely to get more minutes against Sheriff Tiraspol, a match United need to win since only one team will qualify automatically from their group.

But Ten Hag may change tack now the meeting with Leeds United has been postponed since the trip to Moldova represents the final chance to drill his players in a match situation before the derby next month. Regardless, United need a return to winning ways to avoid blowing in Europe the momentum their Premier League form had built.

European game to watch – Bayern Munich v Barcelona
This meeting of two super-heavyweights was absolutely inevitable after a summer which sparked beef between Bayern and Barca.

The Catalans took Robert Lewandowski from the Bavarians, which prompted not-unreasonable questions from the Germans over how such a spree was being financed while Barca appeared to be on the bones of their arse. Tuesday’s visitors to the Allianz Arena, unsurprisingly, did not welcome the scrutiny.

The tension remains at boardroom level, while on the pitch, Barca want revenge for a trio of pastings handed to them by Bayern in recent seasons. Bayern won both games 3-0 in last season’s group stage after tw*tting Barca 8-2 in Lisbon in 2020.

Handily for Barca, Bayern don’t resemble the winning machine we’ve come to know them as. They have drawn four games in the Bundesliga this season, the latest of which saw Stuttgart level in added time on Saturday, which has led to reports of a rift between Julian Nagelsmann and his players over their tactics.

EFL game to watch – Burnley v Preston
If the Champions League is a little too rich for your blood, Tuesday night also offers a feisty Lancashire derby as North End head to Turf Moor.

Preston went seven unbeaten from the start of the season, though that stat requires considerably more context. Five of their first six games were goalless stalemates. Their three other games have been settled by one goal; two wins and a defeat last time out against Birmingham.

Mercifully, Burnley have been more interesting to watch as Vincent Kompany sets about implementing his philosophy on the Clarets. The hosts may have been grateful for a breather at the weekend after Kompany admitted they looked leggy last time at West Brom where they succumbed to an added-time leveller.

Only two points separate Burnley in fifth and 10th-placed Preston. If a Turf Moor tear-up between local rivals doesn’t grab you by the balls, then Sky Sports are showing every other Championship clash from a full midweek programme.