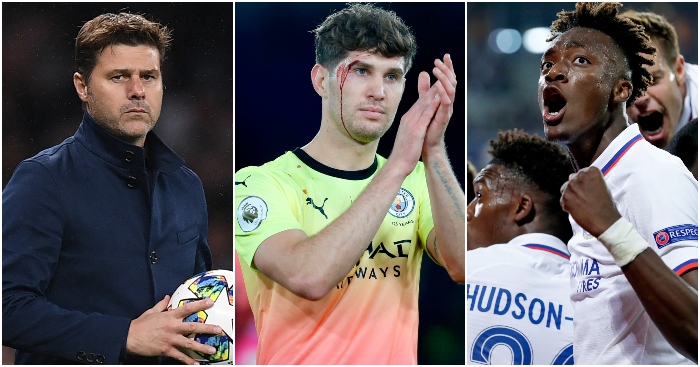 Game to watch – Ajax v Chelsea
Frank Lampard takes his youngsters to Amsterdam on Tuesday for the first of a double-header that will likely go a long way to deciding the outcome of Chelsea’s Champions League group campaign. Losing their opening match at home to Valencia put the Blues on the back foot and though a victory over Lille has eased concerns, Lampard’s toughest test in Europe awaits this week.

Handily, Chelsea are in fine fettle. That victory over Lille came in the middle of a five-game winning run which has seen the Blues bag 15 goals. Just as encouragingly given the start they endured, Chelsea have also kept a couple of clean sheets during this streak.

Of course, Ajax are a different proposition. The Eredivisie champions reached last year’s Champions League semi-finals and were left kicking themselves over not going all the way to Madrid. Ajax have lost some key players, of course, but that is what they do; move on the big names for big money before allowing the youngsters to move up the ranks.

Which is the approach Chelsea have been forced to take this season and it is a good look on them. With the likes of Tammy Abraham, Mason Mount and Callum Hudson-Odoi forming the crux of Lampard’s XI, the Stamford Bridge public have been quick to forgive the errors their youngsters have made.

Though they have generally learned fast, the visit to Ajax and the return in a fortnight leaves little room for the kind of mistakes already made, especially at the back. These two games are all about the result, far less about development. Yes, the two generally go hand in hand, but Roman Abramovich and the Blues board still expect progression to the Champions League knockout phase, even if the punishment for failure is never likely to be as previously seen.

Ajax, despite their youth, know all about grinding out necessary results even if their total football is far from flowing. They did exactly that this weekend when they produced a “horribly bad” performance, their worst in two years, according to Daley Blind. But they still got the job done to win 2-1 at bottom-placed RKC Waalwijk and go three clear at the top of the Eredivisie.

For all the talk of Ajax playing their kids – and they do have a younger average running through their squad – it is the Blues who have the starting XI with the lowest average age. Not by much, mind, and this will be another different type of test for a team tasting a lot of firsts this term.

Player to watch – John Stones
Pep Guardiola came up with the answer this weekend to Manchester City’s defensive crisis: don’t bother with defenders.

The manager took the champions to face a side which has given his team plenty of problems in the past and with Crystal Palace able to leapfrog the visitors with another victory, all eyes were on Guardiola to see how he might cope with a problem partly of his own making. He came up with a plan no one predicted though, knowing Pep, perhaps we should have done.

Rodri and Fernandinho, two central midfielders, occupied the heart of City’s defence flanked by two full-backs, Joao Cancelo and Benjamin Mendy, more renowned for their attacking qualities. Though City were expected to have the vast majority of the possession, it represented a risk given how much Palace appear to enjoy bloodying the noses of the big boys.

This was not a decision forced upon Guardiola. Yes, he has an injury crisis at the heart of his defence with Nicolas Otamendi and Aymeric Laporte both out, but Stones was deemed fit enough to return to City’s squad and the England defender was forced to sit and watch for 79 minutes while a couple of midfielders did his job.

Guardiola would play midfielders in every position if he could, and he may well be able to do that in the coming domestic fixtures: Aston Villa and Southampton twice, all at home. But after that come games against Liverpool and Chelsea.

If Guardiola has any thoughts of using Stones, then the centre-back needs matches to get into his groove before going to Anfield in three weeks. That is presuming that Stones can remember what it feels like to be in form, because injuries have kept him sidelined for much of this season, while the manager’s preference led to the 25-year-old watching most of the run-in from the bench last season. Or in the case of the must-win Manchester derby, the stands. When he did get a game, with England in the Nations League, he might have wished he hadn’t bothered.

As much as Guardiola perhaps wishes he didn’t have to use the £49million star, his failure to buy a replacement for Stones’ replacement last term, Vincent Kompany, means there will be plenty of times this season where he will have no choice. Stones needs a run-out in Atalanta and a 90 minutes free of dropped bollocks.

Team to watch – Manchester United
Well, that was better. Okay, it could not have got much worse, but United showed some signs of life against Liverpool as well as a dogged determination to fight for Ole Gunnar Solskjaer.

The United boss has had his credentials questioned – especially when coming up against the top managers – but on Sunday, the selection of a back five did the trick, with Liverpool’s threat nullified as well as anyone has managed this season.

But Solskjaer’s greater concerns lie further forward. Organising a defence is arguably simpler than teasing creativity and ruthlessness from an attack, which is where United have been so poor at times this season. When they are expected to attack, United have shown themselves to be utterly impotent.

Against Partizan Belgrade on Thursday night, the onus will be back on United to attack and create, just as it was on their last European trip to AZ Alkmaar. In Holland, the Red Devils failed to muster a shot on target. It took them three-quarters of the match to have any kind of shot that wasn’t smashed straight into an AZ defender.

Solskjaer will most likely blend his team with experience and youth as he looks to take charge of the group against current leaders Partizan. Victory will also halt at 11 the number of away games United have gone without winning, which is their worst streak on the road for 30 years. Solskjaer must ensure that Sunday was no fluke, while also finding a way to squeeze out some attacking dynamism from his flaky ranks.

Manager to watch – Mauricio Pochettino
Spurs know that the visit of Red Star Belgrade on Tuesday is a must-win encounter, not only to lift some of the gloom that has engulfed the Tottenham Hotspur Stadium but primarily to give themselves a shot at progressing from their Champions League group. Pochettino’s side currently trail the Serbs by two points after giving away a draw in their opening game at Olympiakos before being humped 7-2 by Bayern Munich.

Since that humiliation, nothing Pochettino has tried has worked. A reaction was expected the following weekend at Brighton but his shellshocked players shipped another three goals in a defeat perhaps even more disheartening than being battered by Bayern.

Then came a fortnight to take stock before the Premier League’s bottom side arrived at White Hart Lane. Pochettino switched to a back three before yet again having to change mid-game when Watford played in a manner the Spurs manager had not predicted. The only players who made a positive impression were those who came off the bench after being left out from the start. Regardless, Tottenham struggled to break down the Premier League’s joint-worst defence while the division’s joint-worst attack, shorn of their starting forward after three minutes, too often wandered with ease through the home defence, regardless of the shape it took.

It is hard to know what else Pochettino might try. A fifth different right-back, perhaps? That aside, the manager simply has to continue to throw sh*t at the wall and hope that on Tuesday some of it eventually sticks, especially with a trip next weekend to Liverpool where Pochettino must plug a leaky defence and somehow end a truly wretched run on the road against the Premier League’s only unbeaten side.

Football League game to watch – West Brom v Barnsley
“A different playing field” was how Barnsley caretaker boss Adam Murray described the gulf between his side and West Brom. He’s not far wrong – the entire Championship currently separates the Tykes and the Baggies.

The league leaders have lost just one of their dozen games so far while Barnsley are winless in 11 since they beat Fulham on the opening day. The first ten of those matches cost Daniel Stendel his job, somewhat harshly given the job he did in taking the South Yorkshire side back to the Championship in his first season in charge and the summer’s comings and goings which followed.

Murray was promoted from the Under-18s role to the top job on a caretaker basis upon Stendel’s departure and the Tykes got a point from his first game in charge on Saturday – a 1-1 draw with Swansea.

“You can go there with fear and anxiety,” admitted Murray ahead of the trip to The Hawthorns but he insists Barnsley will go to attack. Their problem, though, is making those attacks count.

“We enjoy ruining parties,” says Murray and that may be true. But this season, the Tykes are pissing in the corner of the front room at their own bash.