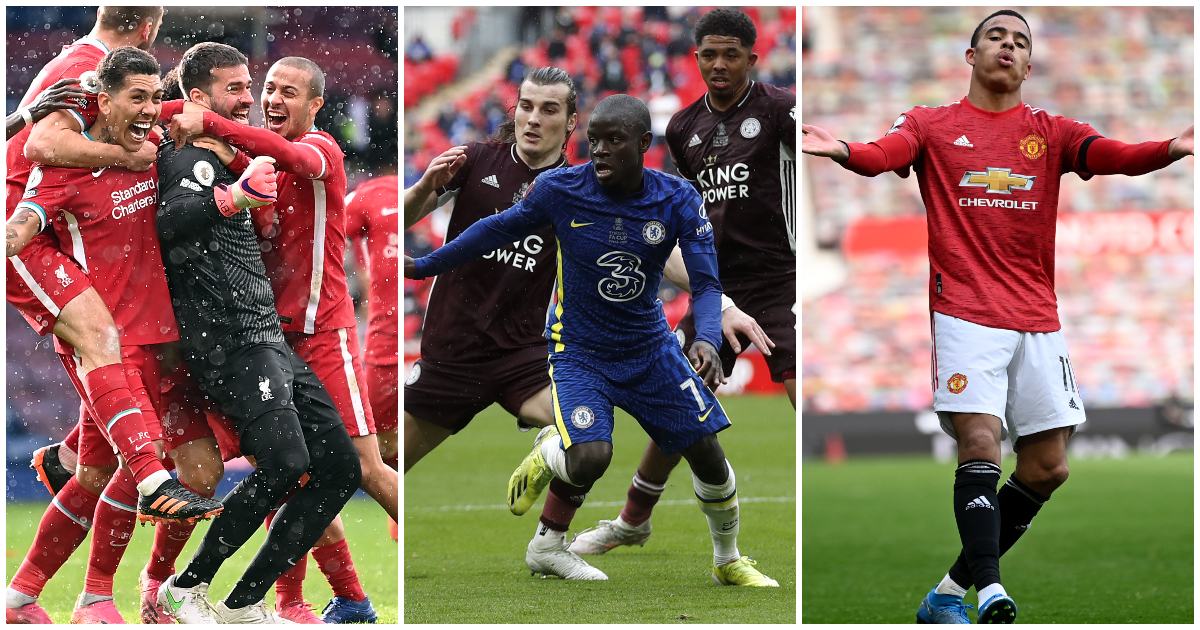 We’ve got a Chelsea v Leicester shoot-out for the top four, Everton’s effort to avoid a record low, EFL play-offs, and finals in France and Italy…

Game to watch – Chelsea v Leicester
The FA Cup finalists meet again, three days after Leicester joyously claimed victory at Wembley in what, regardless of whatever any wrong ‘un may tell you, was definitely the bigger game of this particular double-header.

It certainly was for Leicester. The significance of winning their first FA Cup was clear to see and while a top-four place would be huge for Brendan Rodgers’ side, no one in Leicestershire will talk about coming third in the Premier League in the same way they will reminisce about beating Chelsea at Wembley.

That said, it’s still a huge game for the Foxes. A top-four place was seen as an ambitious target before the start of the season but Leicester’s expectations must have altered in the context of how the season has unfolded. They haven’t been out of the top four this year, in which time they have spent all but three of 20 matchdays in third place.

Another win over Chelsea, a third of the season, would secure Champions League football, which would see Brendan Rodgers return to where he probably feels is his natural habitat. And he’s probably right. He and Leicester deserve a place at the top table next season. As euphoric as they may be after winning the FA Cup, they cannot allow themselves to blow it now, as they did down the home straight last year.

Chelsea have had to time their run to the top four but it is possible they may have gone slightly too soon.

Thomas Tuchel has worked wonders with the Blues, lifting them from ninth when he took over at the end of January to a position where failing to secure top four would be seen as a failure.

The defeat to Arsenal has hurt them, so too did Alisson’s goal at West Brom, and Tuchel is yet to switch from ‘angry mode’. The Chelsea boss refused to criticise his players on Saturday, suggesting they deserved to win, but justifying that stance would be a hard sell. The Blues were impotent again in attack and Tuchel has to find a way to get them firing on Tuesday as Leicester have the blueprint for beating them and shutting them out.

F365 Says: The people’s club? Are we all Leicester City now?

Team to watch – Liverpool
Chelsea’s clash with Leicester is only significant if Liverpool do their job at Burnley on Wednesday. Which you would expect, but then we expected so much more from them at West Brom and they disappointed before Alisson did a madness.

But after that ridiculous moment of pure, undiluted Barclays, do we really expect Liverpool to blow it now? With Jurgen Klopp’s side this season, you can never be certain.

Something, though, seems to have changed at Liverpool in the past week or so. Three wins, each one unique in their own right, appear to have given the Reds a belief that they have lacked for much of what might not be such a miserable season after all.

Not conceding an equaliser to Southampton; turning over Manchester United at Old Trafford for the first time on Klopp’s watch; and the drive to keep going to the 95th minute at The Hawthorns, taking advantage of the breaks when they came.

In none of these games have Liverpool achieved the performances we know them to be capable of. But so often this season, they have played poorly and crumbled. Now, even if they are toiling, they are sticking it out. And it seems that they have timed their semi-resurgence to perfection.

They won’t f*** it now. Not against a Burnley side with almost nothing to play for. Will they?

Manager to watch – Carlo Ancelotti
The Everton boss can only hope that the return of supporters to Goodison Park on Wednesday will prompt some improvement from his side. Because whatever the manager tries at Goodison, it isn’t working.

Ancelotti admitted he was embarrassed by the 1-0 defeat to already-relegated Sheffield United on Sunday night, and so he ought to be. Their ninth home defeat this term, in isolation and in the context of their season as a whole, should be a source of shame for the Toffees.

So what might he do about it? Ancelotti pulled Mason Holgate at half-time before double hooking James Rodriguez and Abdoulaye Doucoure with Everton seeing none of their sh*t stick. The manager bemoaned a lack of quality on the ball, hinting that they would make changes in the summer, but before then, Everton have one last chance to avoid their worst home season ever.

With 1 home game left of our 116th league season, failure to beat Wolves will result in this season being our worst home record in history (if we beat Wolves our points average will go to 1.16 per game) pic.twitter.com/d8GZJkwdFR

Wolves have been wretched, but Newcastle, Fulham and Burnley were hardly in sparkling form when they won at Goodison.

Player to watch – Mason Greenwood
Ole Gunnar Solskjaer has his Europa League final XI pretty much set. As long as Harry Maguire is fit, the only other dilemma is who starts on the right side of his attack.

Not for the first time, Paul Pogba has complicated things for Solskjaer. With the France midfielder occupying the left side of the three behind Edinson Cavani, it has seen Marcus Rashford switch to the right. Which arguably causes more problems than it solves.

Rashford is not as comfortable on the right as he is cutting in from the left and his presence on that flank shunts Greenwood to the bench. Which the youngster isn’t taking lying down.

Greenwood has scored eight in his last 11 matches and his form merits a place in United’s best XI. Rashford in contrast has one in eight and looks, understandably, knackered. But he too has enough credit in the bank to expect to play in Gdansk.

So Solskjaer has a choice: remove Pogba from the left; or choose between Greenwood and Rashford on the right. All three have two more opportunities to present their cases against relegated Fulham on Tuesday night and then on Sunday at beleaguered Wolves.

On Tuesday, if you don’t fancy the almost-inconsequential Man Utd v Fulham clash, then Oxford United v Blackpool kicks off the League One semis at 6pm. That’s followed by Newport v Forest Green Rovers at 8:15pm.

On Wednesday, it’s Lincoln v Sunderland at 6pm before Tranmere host Morecambe at the same time on Thursday. The second legs then go from Friday to Sunday, giving you seven solid days of brown-trouser football.

European game to watch: Juventus v Atalanta
It’s a massive week for Juve and Andrea Pirlo. They can still qualify for the Champions League but the Old Lady is relying on Milan or Napoli to blow their one-point advantage on Sunday.

Before then, in the Coppa Italia final on Wednesday, Juve face Atalanta, who have already punched their ticket to the Champions League. It will likely be Gianluigi Buffon’s swan-song for the Bianconeri but even a victory in Italy’s first game in front of supporters since last March won’t atone for the failure to secure a top-four place.