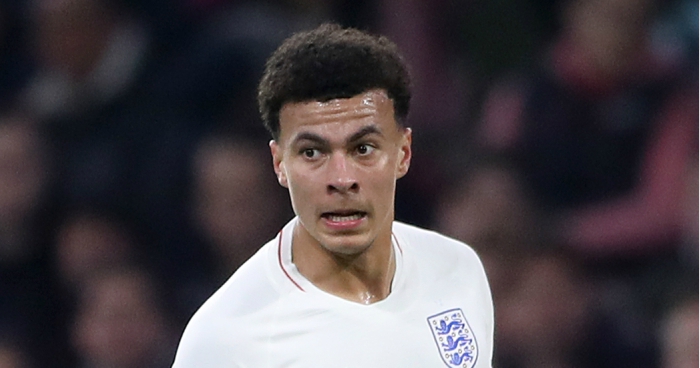 Game to watch – England v Italy
Don’t worry, I’m not going to lecture you again about why you should get on board with England, but on Tuesday evening Gareth Southgate’s team will play a friendly in front of a sold-out Wembley Stadium. That’s quite some achievement.

After the steps forward taken against (an admittedly wretched) Netherlands, England now face a far sterner test. Italy may have also missed out on World Cup qualification and still be waiting to appoint a new permanent coach this summer, but they are far stronger than Friday’s opponents.

There are two notable points of interest here. The first is discovering how Jamie Vardy performs against a team who may dominate possession, with the striker looking to sit on the shoulder of the last central defender and exploit space in behind. The success of that tactic will depend on England surviving a high press and Vardy being effective against high-class defenders in Leonardo Bonucci and Daniele Rugani, plus Gianluigi Buffon in goal. This is Vardy’s chance to prove that he can be a better option even than Kane in games when England will not have 15-20 shots, but four or five.

But most intriguing is that this is England’s last match before Southgate names his provisional World Cup squad, and so gives several players their final opportunity to impress. If Jesse Lingard, Kyle Walker, Jordan Henderson and Jordan Pickford made their cases on Friday, now James Tarkowski, Dele Alli, Adam Lallana and Alfie Mawson must do the same. The match may not be competitive, but the race for a seat on the plane certainly is.

Player to watch – Ryan Sessegnon
The most pleasing aspect of this England Under-21 squad is not that it contains plenty of players from within the Premier League’s top half, but that three of the Championship’s best players of the season are all included. The theory is that Football League minutes, particularly in the Championship with its incessant Tuesday-Saturday schedule and competitive nature, can help a young player develop before they make the leap to the top flight.

Sessegnon, Joe Worrall and James Maddison have started 100 Championship matches between them this season, and could now hope to command transfer fees of a combined £70m. So quick has been their ascent that they share only three under-21 caps, with Sessegnon included in Aidy Boothroyd’s squad for the first time at just 17.

Despite his tender age, Sessegnon is surely the highest-performing member of the entire squad and will be pushing for game time in a crucial group fixture against Ukraine. Having beaten the same opponents in Kiev in November, victory would virtually secure qualification for Euro 2019. Surely it’s time to let this kid off the leash and see how ready he is for a move to an elite club?

Manager to watch – Alex McLeish
It would be a waste of time for Big ‘Eck to claim that he was ever the first choice for the Scotland job; he might even struggle to convince anyone that he was in the original top five candidates amongst most supporters. There is no surge of dislike towards McLeish, but nor can there be a wave of positivity. After the Scottish FA mangled the appointment of Michael O’Neill and then failed to even interview Derek McInnes, Neil Lennon and Steve Clarke, they are left with the safe choice.

The question is whether safe is enough anymore. McLeish has had a dismal recent record as a manager, sacked by each of his last four clubs having failed to manage 100 games across them all combined. His last success came at Birmingham City in 2011, and even that ended in Premier League relegation.

Having lost his first game in charge at home to Costa Rica, McLeish’s message is that now is not the time for Scotland to panic. Given that the only countries they have beaten in competitive matches in the last three-and-a-half years are Slovenia, Slovakia, Lithuania, Malta and Gibraltar, panic would seem like the reasonable reaction. Lose to Hungary on Tuesday evening, and the knives that many began to sharpen as soon as McLeish was appointed will already be in hand.

Team to watch – Spain
A team ready to challenge once more. Having won three major tournaments in succession between 2008 and 2012, Spain have flunked their last two. Julen Lopetegui was not everyone’s choice to take over as manager following his sacking by Porto, but the former Under-21 coach at least ensured continuity following the retirement of Vicente del Bosque.

Yet with expectations finally below sky-high, Spain have responded. They dropped only two points in qualifying despite being drawn against Italy, and last Friday held Germany to a 1-1 draw that offered evidence that La Roja can compete again in Russia.

“You can sense the great national team we have,” Sergio Ramos said after that draw. “We have a long way to go and we’ll try to do well in Russia. Facing potential rivals like them will help us a lot at the World Cup.”

Lopetegui’s issue lies in finding a centre-forward to start in front of a truly excellent midfield. Alvaro Morata’s struggle for starts at Chelsea mean that he wasn’t even selected for the fixtures against Germany and Argentina, while none of those within the squad (Diego Costa, Iago Aspas, Rodrigo and Lucas Vazquez) have more than six goals for their country. The second top scorer in the current squad is Ramos.

One-on-one battle to watch – Dele Alli vs Marco Verratti
Alli needs a performance. The Tottenham midfielder was one of England’s weaker players against Netherlands, England losing their composure in midfield following his introduction. As Matt Stead wrote in the player ratings, ‘this is the sort of system that Alli should thrive in, and two of his main competitors in Lingard and Sterling performed well’.

Alli, used as a substitute on Friday, will start against Italy. He must improve if he is to persuade Southgate that he merits a starting role; simply being used to playing with Harry Kane at club level should not be reason enough.

Alli could not have picked a better opponent against which to flourish. There is little point impressing against sub-par holding midfielders now, and in Verratti, Italy have one of the best in the world. Even if his form has tailed off after such predictions of grandeur when he moved to Paris Saint-Germain.

Should Alli create for Vardy, and drift out wide to drag Verratti with him and create space for teammates, Southgate will believe he can do the same against Mousa Dembele or Radja Nainggolan in June.

Football League game to watch – Blackburn Rovers vs Bradford City
Only one Football League game on between Tuesday and Thursday, but luckily it’s a belter. Bradford finally won their first game since New Year’s Day against Gillingham on Saturday, and despite their dreadful run (and Stuart McCall’s sacking) there is faint hope that they can get back into the play-off picture. Victory in their games in hand will be crucial.

Unfortunately for Bradford and new manager Simon Grayson, they now face the form team (and Grayson’s former team) Blackburn. Tony Mowbray’s side will move back into the top two with a win, and have lost one of their last 26 league games. Their record at Ewood Park is superb: Ten wins and six draws from their last 16 in the league, and two or more goals scored in 12 of their last 13.

International game to watch – Germany v Brazil
The football obsessive is presented with something of a challenge on Tuesday evening. You can just about squeeze England Under-21’s game against Ukraine at 6pm before the England game kicks off. But at 7.45pm on BT Sport 2 there’s Germany against Brazil and at 8.30pm on Sky there’s Spain vs Argentina. In the space of 45 minutes, three games kick off that cover 15 of the last 16 World Cup-winning countries. This is heaven.

Any Germany v Brazil match is special as the two countries with the most major tournament wins in the game’s history, but this one has added spice. The last time they met, Germany brought the World Cup hosts to their knees and then kicked them to the ground for good measure. Nothing will ever repair the damage of that fateful, frightful night, but competing with Germany (again without Neymar) would offer hope that coach Tite has indeed brought Brazil to full health again. There are the two favourites for the World Cup for a reason.

Thought Tite might play down the magnitude of the friendly? Not a bit of it.

“This has a huge psychological meaning – no one needs to fool themselves about that,” he told German magazine Kicker. “The 7-1 from the World Cup is like a ghost. It’s present, people still talk about it, but the more you talk about it, the less this ‘ghost’ disappears.

“It won’t just be a sporting challenge, but a huge emotional challenge too. Sometimes you get that in football, a team comes close to perfection and that’s what happened to Germany. The wound is still open and the match in Berlin is a part of the process of closing it.”