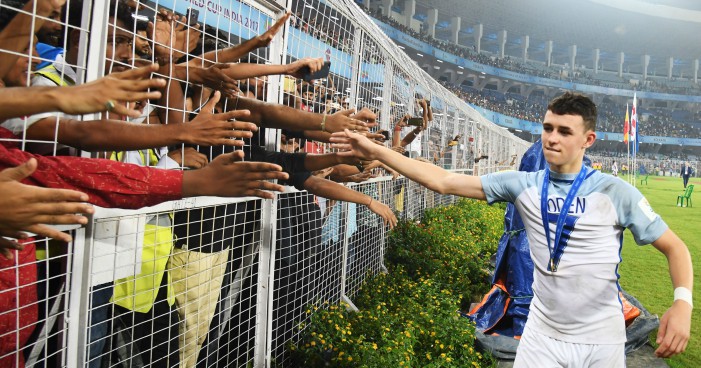 Game to watch – Hungary U-19 v England U-19
If you are as fascinated by England’s youngsters as Football365’s Daniel Storey then you probably have a matching restraining order and a lifetime ban from St George’s Park. If, like the rest of us, you are mildly interested in England’s future and are happy to half-watch a game on a Wednesday afternoon that is available on Sky, Freeview and just about every other platform barring Virgin, then this one is for you. Find Freesports – you will already be familiar if you are a wrestling or ice hockey fan – and idly wonder if any of these players will ‘make it’.

England are of course the reigning European champions but this is an almost entirely new set of players, though Keith Downing remains the man in charge. This time last year, we took absolutely no notice as an England side featuring the likes of Trent Alexander-Arnold won all three of their games in this Elite stage (a four-team group that sends one team through to the finals). But this year, we are watching. England are in Macedonia and are the favourites to emerge from a group featuring their hosts, Hungary and Latvia. With success comes expectation.

This current selection is dominated by Chelsea, Arsenal and Manchester City players, with eight of the squad featuring in the FA Youth Cup final for Chelsea and City last season. But the Gunners have possibly the most recognisable trio, with Reiss Nelson, Eddie Nketiah and Joe Willock all featuring in Arsene Wenger’s first team this season. Nketiah already has eight goals in seven games at this level; he really could be quite good, you know. Watch him.

Eddie Nketiah in the #PL2 this season:

Reiss Nelson in the #PL2 this season:

With nothing to play for in the Premier League, they deserve minutes. 🔴⚪️ pic.twitter.com/HKvNnR28Y8

Player to watch – Phil Foden
Some would have him in the full England squad, but some are idiots.

“Why not take a gamble in a squad of 27 and take Phil Foden, who has won the World Cup and scored two goals in the final for the U17 team, or Jadon Sancho, who is playing for Borussia Dortmund,” asked one national newspaper journalist this week and the resounding answer is ‘because it would be mental’. Foden still has just 18 minutes of Premier League football under his belt and his promotion to the England Under-19 squad is exactly the right scale of progression for a player who doesn’t even turn 18 until May.

“I’ve not seen something like I saw today for a long time. His performance was another level. He’s a City fan and loves the club. He’s a gift for us. He’s special,” said Pep Guardiola last summer and he has stuck by his promise to keep him around the first team. There are those who say there are no pathways for young English footballers but this is a 17-year-old who has started two Champions League games; how many can make that claim?

It will be fascinating to watch Foden play with the likes of Nketiah, Sancho and Mason Mount, one of a handful of survivors from last summer’s success and a man (rather than boy) very much established in the Vitesse Arnhem first team. Foden looked effortlessly wonderful at U-17 level; will he disappear into the crowd here? Early signs suggest not. Remember that this is a young man who is picking the brains of David Silva and Kevin de Bruyne every day. Priceless.

Manager to watch – Ryan Giggs
Finally, somebody has ‘given it Giggsy’ – presumably for longer than until the end of the season – and his reign begins with a China Cup fixture against, aptly, China themselves. Despite having Marcello Lippi in charge, China have not won any of their last five international matches. He might have about 36 more years of experience as a manager but Lippi also has a squad of players who have seen little football outside of China while Giggs has Gareth Bale and Joe Allen and Gareth Bale and Ashley Williams and Gareth Bale and Ben Davies and Gareth Bale. A Wales defeat would be truly embarrassing; it’s been almost four years since China beat a European team over 90 minutes.

In some ways, a Wales friendly against a big team warming up for the World Cup would have made life easier for Giggs, who would have garnered credit for a 0-0 with Italy or even a narrow defeat at the hands of Germany. As it is, Giggs really should beat China. How much will he change? Will we see the three-man defence that took Wales so far in Euro 2016? Will Bale be given a free role? The good news for Giggs is that Bale has not lost a game in Wales colours since the Euro 2016 semi-final and he is available, at least in theory.

In his first and most emphatic victory as Manchester United manager, Giggs opted for a 4-4-2. But then that was Norwich at home and this is China away. 11.35am on Thursday on BBC Wales if you fancy seeing whether he really should have been given the United job as experts insisted.

Team to watch – Wales
Because England aren’t on until Friday and who doesn’t want to see Sam Vokes try and score his first goal for club or country since November? Giggs’ striking alternative is Tom Bradshaw, the Barnsley striker; he last scored in December so is arguably in slightly better form.

Football League game to watch – Rochdale v Fleetwood
Well obviously it’s not on the telly, but what else are you going to do on Tuesday night other than go to Rochdale to watch a League One relegation battle?

European game to watch – Manchester City Ladies v Linkopings
Well obviously it’s not on the telly, but what else are you going to do on Wednesday night but go to Manchester to see a Champions League quarter-final for just four quid?

Actually, that is an excellent idea.