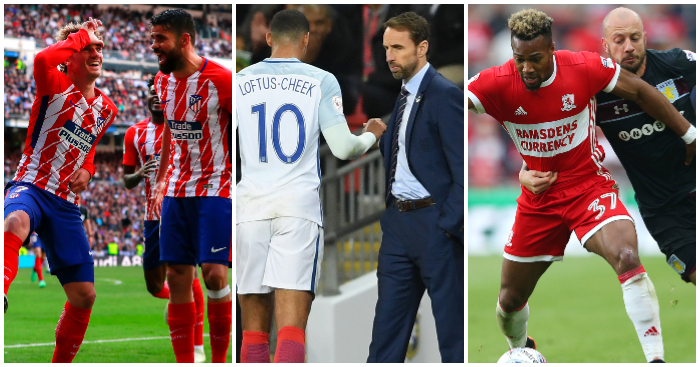 Game to watch – Europa League final
It is not the stage for Arsene Wenger’s farewell, but you can expect Atletico Madrid and Marseille to put on quite a show.

On the road to Lyon, Atletico have showed why Wenger repeatedly stated that he wanted to avoid Diego Simeone’s side for as long as possible. Despite having become more accustomed to Champions League finals in recent years, the Rojiblancos never offered the impression that this competition was beneath them, instead showing a typically determined intention to make the best of a bad job after failing to progress through their Champions League group with Chelsea and Roma.

Marseille have endured a rather longer route to the Stade de Lyon. Rudi Garcia’s men began their campaign back in the qualifying rounds, since when they have relied heavily on home comforts. OM have won eight and drawn one of their nine matches at the Stade Velodrome, but they have won only once on their travels. Perhaps they are fortunate that the final is taking place just a three-hour drive up the A7 in familiar Ligue 1 surroundings.

Garcia will also take comfort from the fact that the muscle problem that forced Dimitri Payet out of last week’s 3-3 draw at Guingamp should not deprive OM of their star man. That six-goal stalemate leaves Marseille a place and a point outside the Champions League places in Ligue 1 with only the final weekend to go, so this final represents their best hope of qualifying for a seat at the top table in Europe next season.

To achieve that aim, Marseille’s defence, which has kept only two clean sheets in 18 matches since they qualified from the round of 32, will have to tighten up. Especially in light of this man’s form…

Player to watch – Antoine Griezmann
The Europa League final will not be Griezmann’s last appearance in the Rojiblancos shirt – they play Eibar in the La Liga finale on Sunday – but the France superstar will be hoping to add a flourish to the finish of one chapter of his career, close to where it all began.

Atletico face OM around 43 miles from where Griezmann was born and raised. Not that Lyon recognised the talent within their grasp, with the Ligue 1 side among a host of clubs seemingly unable to see beyond the youngster’s wiry frame. So at 14 he was taken to Spain by Real Sociedad, who eventually sold him to Atletico for around 30 million euros.

Griezmann moved to Madrid the summer after Diego Simeone’s side had stunned both Barca and Real Madrid to take the Primera Division title. Despite blossoming into one of the world’s finest talents and taking Atletico to a Champions League final, the 27-year-old has not been furnished with winners’ medals, aside from one trinket from the Spanish equivalent of the Community Shield.

Atletico fans used to seeing their finest talents desert them would not begrudge Griezmann a big move this summer – most likely to Barcelona – but the parting gift of another European honour would make his send-off all the more raucous and sincere. He’s certainly done his bit to carry Simeone’s men to this final, scoring the equaliser that crushed Arsenal in the semi-final first leg before teeing up Diego Costa for the second-leg winner.

Griezmann is the brains to Costa’s brawn but the former Chelsea striker has teased out an improvement in his partner, with Griezmann failing to score or assist in only four La Liga matches since the Spaniard arrived. Griezmann has since contributed 14 goals and six assists, compared to five goals and four assists during the first half of the season.

Marseille will be facing an opponent keen to show the Lyon public what they could have had while offering Atletico a tangible form of gratitude for the platform they were far more willing to provide.

Manager to watch – Gareth Southgate
The England manager has seen all the football there is to see – aside from the FA Cup and Champions League finals – so there is little point in wasting any more time before announcing his World Cup squad. Having witnessed Paul Gascoigne’s reaction to being dropped at the last available moment in 1998, it appears a smart move.

Even though Nick Pope isn’t likely to be chucking around furniture like Gazza, there remain plenty of hopes for Southgate to crush. Four goalkeepers don’t go into three places so the Burnley stopper seems most likely to miss out due to Joe Hart’s greater experience, which neatly summarises many of Southgate’s remaining dilemmas.

The Three Lions boss has demonstrated he is not afraid to rely on youth, but the make-up of this 23-man squad hinges on whether he holds his nerve. Many would understand if Southgate opted to play it safe by calling up the likes of Gary Cahill, Chris Smalling, Jack Wilshere or Danny Welbeck but that would contradict much of his early approach to the role, especially if any or all of that trio were used as squad fillers rather than handing that experience to the likes of Alfie Mawson, James Tarkowski or Rueben Loftus-Cheek.

Southgate will name the squad on Wednesday and will then take 24 hours to prepare his answers before facing the media with his working-out on Thursday.

Team to watch – Middlesbrough
Boro’s downfall in the first leg was plotted almost to perfection by Steve Bruce, which was all the more impressive given he prepared for the Championship play-off semi-final while grieving for his late mother. But Boro escaped with only a one-goal deficit, which may be the only regret Villa harbour from their trip to Teesside.

If they are to make the most of their second chance, Tony Pulis’s side must do something they didn’t manage during the regular season: beat a side that finished above them in the table. Boro took only two points from a possible 24 against Wolves, Cardiff, Fulham and Villa so Pulis has to mastermind the type of result neither he nor Garry Monk managed in eight previous attempts.

How does he do that? Pulis will first think about nullifying Villa’s threat and Jack Grealish should be his primary target. Boro never got to grips with the Villan in the midfield battle and losing that ground denied them an attacking foothold.

Pulis’s men were ultimately beaten by a set-piece, which will surprise and infuriate the manager in equal measure. It is normally Boro who are so potent in such situations, with 40 per cent of their goals under Pulis coming from set plays, though they failed to worry the Villa defence with any type of delivery into the box. There is work to be done at both ends in the two days between ties.

A clean sheet won’t be enough for Boro and they have to find a goal from somewhere. Patrick Bamford added an extra dimension when he came off the bench, but Pulis needs another of his young attackers to live up to his billing as their greatest danger…

One-v-one battle to watch – Alan Hutton v Adama Traore
Bruce had spent most of last week making plans for Adama Traore and the Villa boss felt the way they were carried out by the veteran full-back merited huge reward: “If ever a performance deserves a contract then that one did. It was immense.”

Hutton is on course to become a free agent this summer but a similar showing to that which thwarted Boro’s biggest threat at The Riverside will certainly improve his options. The 33-year-old followed Traore everywhere, literally in the second half when Pulis opted to switch his flying winger’s flank. So Hutton went with him and performed the same job.

Traore’s record of five goals and 10 assists – all but two of which have come since Pulis was appointed halfway through the season – suggests he can now apply that finishing touch to the thrilling runs that used to so often end in frustration. But Villa forced the 22-year-old back into some bad habits on Saturday.

At Villa Park, on a ground upon which he was sent off after four minutes earlier this term, whether or not Traore can free himself of Hutton and rediscover that final ball will go a long way to determining whether Boro can turn the tie around and reach a second play-off final in four years.

European game to watch – Bundesliga relegation play-off, first leg: Wolfsburg v Holstein Kiel
Wolfsburg saved their skins on Saturday with a 4-1 win over Cologne that secured 16th place and led to Hamburg being relegated from the Bundesliga for the first time in their history. But it may only be a temporary reprieve, with Wolves facing a two-legged play-off for the second season in succession to secure their top-flight status for next season.

Between them and safety are Holsten Kiel, the third-placed team in Bundesliga 2 from northern Germany looking for their second promotion in as many years and their first passage into the top flight.

The relegation play-off is a unique concept in Europe’s big leagues and an intriguing match-up. The Bundesliga side always plays the first leg on their home patch before going to the lower division club, though history favours the big boys. The top-flight side have triumphed in 14 of the 19 relegation play-offs so far, with only one team – Fortuna Dusseldorf in 2012 – winning promotion in the last eight years.

But Wolfsburg are pushing their luck. They find themselves back in the same strife they were a year ago, though this season’s points total of 33 is the worst they have ever achieved in the Bundesliga.

Whatever happens, Holsten Kiel coach Markus Anfang will be staying in Bundesliga 2 next term after it was announced last month that he will take over at the top-flight’s bottom side Cologne.

Football League game to watch – League One and Two play-off semi-final second legs
Shrewsbury finished the job against Charlton after a first-leg win away to seal a second trip of the season to Wembley, but the three remaining League One and Two semi-finals are all delicately poised.

Wednesday sees Scunthorpe make the 40-mile trip to Rotherham in a more positive frame of mind than they might have had substitute Cameron McGheehan not scrambled an equaliser in the 88th minute of the home tie on Saturday. “It was two very good teams with contrasting styles going at each other for 90 minutes,” said Iron interim boss Nick Daws and that is the minimum we can expect from the return at the New York Stadium.

Coventry were similarly relieved as Scunny not to be trailing before a second leg away from home. Marc McNulty’s disputed penalty three minutes from time denied Notts County, while the other League Two semi is even tighter after Exeter kept a clean sheet at Lincoln on Saturday.

It almost certainly won’t be pretty but three consecutive nights of watching teams soil themselves as a season’s worth of graft comes down to one game is almost guaranteed to be entertaining.