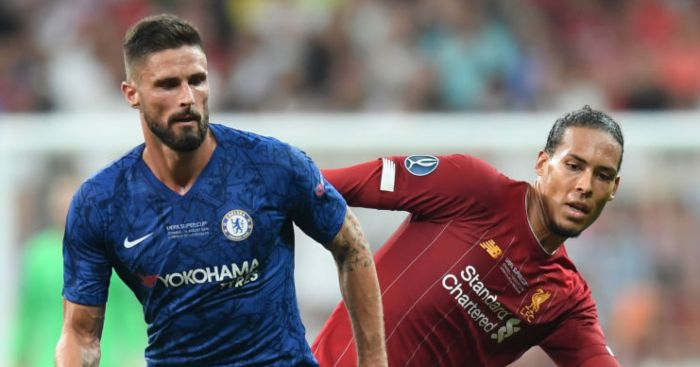 Game to watch – Napoli v Liverpool
In 215 games under Jurgen Klopp, Liverpool have twice scored seven goals, thrice scored six goals and have netted five goals on 11 occasions. They have won two trophies, beaten 47 different teams, scored 463 goals and conceded 230. But in only one match did they fail to have a single shot on target.

“I have to accept it and I can accept it,” the manager said after watching an uncharacteristically blunt and insipid side fall to Napoli in October 2018. “I have a big part of that performance, it was my fault for sure, but I need at least one night to watch the game again to know exactly what was the fault. But it looked not like it should have looked.”

It was no understatement. Liverpool were dreadful that evening, creating one chance in 90 insipid minutes. It was the first time since 2012 that they had failed to test the opposition keeper at least once. Lorenzo Insigne’s goal 30 seconds from time consigned them to a morale-sapping defeat.

Not that it was a particularly fatal blow. The Reds recovered to claim vengeance in more familiar surroundings two months later, beating Napoli by the same scoreline in the final game of the group stage to draw level on points with the Italians and advance in second place by virtue of goals scored. But on that night in Naples, this previously impervious side had its air of invincibility polluted.

So it seems rather apt that Liverpool begin their Champions League defence by returning to Naples with a perfect Premier League record, confidence rarely so high and this never apparently meaning more. The Reds will know not to underestimate a side that has scored more goals than any other in Serie A so far, but will sense a vulnerability in a team that has conceded more than all but two.

Klopp, more than anyone, is aware of the danger of this venue. The German has never won at the San Paulo, losing here both last year and with Borussia Dortmund in September 2013.

And as meaningless as pre-season tends to be – Liverpool are a case in point – Napoli made them look “foolish” less than two months ago and downright inept less than a year ago. There might never be a better time to right those wrongs.

A reunion with Valencia will remind Lampard of the dangers of rotation. He was an unused substitute when these two sides last faced each other in December 2011, forced to watch from the bench as Andre Villas-Boas continued to ostracise the club’s old guard even when they needed a victory to make it out of the group stage.

Chelsea did indeed win, but Villas-Boas was sacked within three months. His attempts to push Petr Cech, John Terry, Ashley Cole, Lampard and Didier Drogba closer to the periphery, reducing their influence, were considered excessive. The Blues, rejuvenated after his departure, would win the Champions League by May.

Lampard is in no such danger of risking his authority by favouring certain players. The dressing room is not as powerful and the club not as demanding in the short-term to necessitate such decisive action. But he will ensure that everyone feels cherished.

Pedro, Christian Pulisic, Willian, Marcos Alonso and Michy Batshuayi have all taken a backseat to Tammy Abraham, Mason Mount, Andreas Christensen, Emerson and a fresher side in the Premier League, but the Champions League should be their salvation. Lampard appeases both parties that way, ensuring there is no divide.

The most obvious substitute to be given his chance is Olivier Giroud. In European competitions alone, the 32-year-old has scored 12 goals and assisted five in 16 games for Chelsea. His career Champions League record is 11 goals and four assists in 20 starts. Abraham’s form is excellent, but he need not be stretched too far when his back-up is so capable.

Manager to watch – Pep Guardiola
It is perhaps time for Pep Guardiola to reevaluate his objectives for the season, particularly now the mask has slipped. With Liverpool crowned Premier League champions, Manchester City might consider this a prime opportunity to pursue their European goals.

Their toughest group-stage assignment is also their first. Dinamo Zagreb will do well to pick up a single point in their six matches, while Atalanta will be a different and difficult test. But a trip to Shakhtar Donetsk is contractually obliged to be described as ‘daunting’ for a reason.

The Ukrainians inflicted upon Guardiola his first ever Champions League defeat as a manager in December 2008, then came back to haunt the Spaniard almost a decade later with City in 2017. Guardiola has faced Shakhtar as many times as a coach as he has Manchester United (11), and lost as often, too.

Luis Castro might consider his side’s chances of completing an unlikely hat-trick reduced further after this weekend’s events. Shakhtar won their seventh league game of seven this season, a run which has seen them score 23 goals and concede six. But City – and Guardiola – will surely not make the same mistakes that Norwich forced and capitalised on at Carrow Road.

Whether that surprise defeat was due to Nicolas Otamendi’s incompetence, John Stones’s prolonged quarter-life crisis, Kevin de Bruyne’s absence, Guardiola’s decision-making or a combination of all that and much more, there will be a response on Wednesday.

There has to be. City’s most recent memory of this competition is the disallowed Raheem Sterling goal that would have put them through to the semi-finals at Tottenham’s expense in April. That was their last inconceivable, unfathomable excuse for failure on the continent. If now is not the time for Guardiola to “gamble everything”, when will he?

Team to watch – Tottenham
City’s conquerors are already under more pressure from some quarters, so to speak. Tottenham will be minded to ignore those claiming that anything but at least a last-eight berth would be an ‘abject failure’ after last season’s exploits.

Still, there is plenty to be said for their need to satisfy a new-found taste for success. “When you get that close to winning the final, it is upsetting and disappointing,” midfielder Harry Winks said this week. “There is no better way than trying to go one step further like Liverpool did. It is obviously everyone’s dream to get back there but we can’t look too far into the future.”

Yet that rather misses the point: Tottenham never did get close to winning the final. They did remarkably well in overachieving and reaching that stage, but froze once they were there.

To be beaten by a better, more mature, prepared and structurally sound team is no crime. Tottenham, much like Liverpool 12 months ago, were simply not ready for the occasion, and crashed a party they were never invited to. But they can no longer be considered a European underdog or novice. More will be expected of them now, justifiably or otherwise.

The biggest change is that games that might have looked tricky before, such as Wednesday’s journey to Olympiakos, seem negotiable. Tottenham have always – or at least usually – had the quality under Mauricio Pochettino but, allied with the nous and spirit they displayed last season, can finally proceed with an aura of experience and wisdom. Or lose 3-1 and have a man sent off.

Real Madrid’s demise looks entirely more forgivable in hindsight, albeit less memorable. The reigning champions took an unconvincing yet surely unassailable 2-1 lead away at Ajax before succumbing to a 4-1 Bernabeu defeat in the second leg. PSG were swept up in the hubris of the Ole Gunnar Solskjaer-led Treble tribute act as Manchester United secured what remains their most recent away win in all competitions to progress.

PSG suffered the biggest shock but gave the most understated reaction. A summer spend of under £90m was positively thrifty, particularly as Thomas Tuchel kept his job. Real outmatched them in both, replacing Santiago Solari with Zinedine Zidane within six days of the Ajax loss, and giving the returning Frenchman more than £270m to revamp an ageing squad.

There will be no Neymar, no Kylian Mbappe, no Edinson Cavani, very possibly no Luka Modric and thus no shortage of intrigue. At least one of the five tournament favourites will be starting on the back foot.