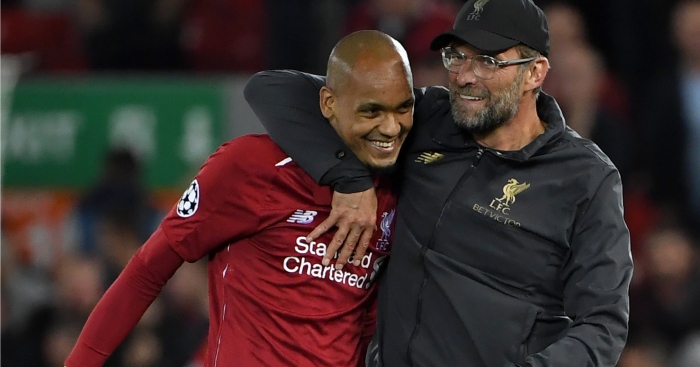 Game to watch – Liverpool v Bayern Munich
The Champions League may not be priority for Jurgen Klopp this season but the Liverpool boss will gladly accept a busier schedule during the Premier League title race home straight if it means sticking it to Bayern Munich once again.

The easy assumption has always been that Klopp would one day end up managing Bayern – he’s Germany’s best club coach and the Bavarians have a habit of picking off the best talent. But in his Borussia Dortmund days, many of which were spent provoking Bayern by having the temerity to be better than them, Klopp has too often been on the wrong end of their approach. Even prior to having all his best players cherry-picked by the Bundesliga giants, Bayern began burning their bridges with Klopp by opting for Jurgen Klinsmann instead of the then-Mainz coach in 2008. Klopp has tried to take every opportunity since to prove them wrong, despite Klinsmann having already done just that.

Klopp’s grievance – not that he would admit to one – is just one of the sub-plots to a fascinating encounter for which Liverpool start as favourites. Like the Reds, Bayern have plenty on their plate domestically, with Niko Kovac’s side trailing in the Bundesliga and facing the prospect of relinquishing their title for the first time in seven years – since Klopp’s Dortmund defended the championship in 2012.

Bayern are also likely to be some way from full strength when they walk out on what we are apparently obliged to call ‘one of those special nights at Anfield’. Thomas Muller is suspended, while Jerome Boateng, Arjen Robben and Corentin Tolisso are not fit enough to make the trip to Merseyside, presenting Kovac with a selection dilemma. He may well choose to retain the shape that has seen Bayern get back on track after the recent defeat to Bayer Leverkusen. A 4-2-3-1 featuring Leon Goretzka, James Rodriguez and Thiago Alcantara gives Bayern a fighting chance of winning the midfield battle on the front foot, especially against Liverpool’s inconsistent core – but Klopp will recognise the opportunities to get at a defence that has conceded eight goals in six games and has failed to keep a clean sheet since returning to action after the winter break.

How Kovac chooses to cope with the threat of Liverpool’s counter-attack will be pivotal to the outcome of this first leg. Can Thiago and Goretzka to be trusted to demonstrate the requisite discipline to plug the holes the hosts’ front three will pour into upon winning possession? If not, Bayern could go the same way as Roma, City and Porto last season when Liverpool did their damage early in the ties.

Of course, Liverpool have their own absences to contend with…

Player to watch – Fabinho
Jamie Carragher reckons Virgil Van Dijk could be the factor that swings the title race in Liverpool’s favour. This week, we could get a real insight into just how great a difference the centre-back makes.

Van Dijk is suspended for Bayern’s visit, which would be alarming enough before you consider Klopp’s other defensive concerns. Joe Gomez remains sidelined and so too most likely does Dejan Lovren, who didn’t travel to Marbella last week with the rest of the Liverpool squad because the hamstring injury he sustained in the FA Cup at Wolves has not yet healed sufficiently.

That defeat at Molineux was one of only two occasions this term that Liverpool have been without Van Dijk and both games have ended in 2-1 defeats that halted their domestic cup campaigns at the first hurdle. Klopp probably couldn’t care less about the consequences of those exits and, though he might not be chucking all his eggs in the Champions League basket again, defeat will not be accepted quite so willingly, especially when there is momentum to consider.

The most likely answer to Klopp’s defensive conundrum: a centre-back partnership of Joel Matip and Fabinho. The Brazil midfielder was pressed into defensive duties at Molineux and during the Premier League win at Brighton, when he was ushered through the game by Van Dijk alongside him. Never yet have Fabinho and Matip paired up together.

They will be teaming up to deal primarily with Robert Lewandowski. Dietmar Hamann labelled the Poland striker ‘a problem’ for Bayern last week, which provoked a furious reaction from the club and the player. Lewandowski called Hamann ‘flat-out stupid’ in response and if he is looking to prove a point, then a big Champions League night against an untried defensive pairing is perhaps the perfect opportunity.

The stats don’t back up Hamann’s theory. Lewandowski is the Champions League’s top scorer with eight goals from six group matches at a rate of one every 67 minutes. He has scored 13 and created nine in 21 Bundesliga matches. Lewandowski would have been a tricky test for Van Dijk. For Fabinho, this is perhaps the biggest challenge of his Liverpool career so far.

Manager to watch – Unai Emery
The Arsenal boss couldn’t be accused of taking BATE Borisov lightly last week, even if his players most certainly could. Despite picking the big guns in Belarus, Emery’s reward was a wretched, gutless performance in a defeat to a side that was playing its first competitive match in nine weeks.

Given his selection in the first leg, Emery has little option for the return match on Thursday other than to trust the players who got the Gunners into this mess. In all likelihood, they most probably will, even factoring in Arsenal’s capacity for calamity. But though he cannot make wholesale changes, Emery will be keen to make his authority clear in the wake of a display that only intensified fans’ flashbacks to the dark final days of the Wenger era.

But even then, it was better than last week’s shambles. Wenger’s side beat BATE 4-2 in Belarus last term despite most of the club’s big names being granted the evening off, while the home tie resulted in the Gunners’ biggest win of the season. Emery needs a similarly resounding triumph this week to reassure supporters that last Thursday was merely a blip and that, in fact, he does know what he’s doing, despite all the experiments so far yielding few positive outcomes.

Emery seems wedded to three at the back despite the fact his rearguard is the leakiest in the Premier League’s top eight. Only Bournemouth and Fulham have conceded more away from home. If the future of Arsenal’s defence is to take this shape, then Emery needs to somehow provoke a swift improvement if he is to retain the faith he needs to plough on with the job.

One forced change is the replacement of Alexandre Lacazette up front. The striker was sent off late on last week, finally snapping after a tortuous evening during which he was offered little in the way of service. “I should have stayed calm but it’s not always easy,” he said by way of apology in the aftermath of the defeat. For as long as Henrikh Mkhitaryan proves Jose Mourinho was at least right about something, it is easy to understand why Lacazette flipped.

“We play another 90 minutes next week and I am sure it is going to be different,” Emery said while searching for the positives. “I trust in our players and in our stadium with our supporters.” If Emery wants that trust to continue to be reciprocated, a vast improvement in a comfortable win is essential in a competition the Arsenal boss has made one of his main priorities.

Team to watch: Manchester City
In truth, City’s trip to Schalke is probably the least intriguing of the week’s four Champions League last-16 ties. Vying for your attention on Tuesday with Liverpool and Bayern are Lyon and Barcelona, while Juventus head to Atletico Madrid at the same time Premier League champions City are facing the Bundesliga’s 14th-placed side at the Veltins Arena.

Pep Guardiola doubtless prefers to be lower down the bill for now. The draw presents City with the chance to make relatively serene progress, while Leroy Sane and Ilkay Gundogan get the opportunity to see some old friends. It should be a pleasant week for Guardiola and his players.

But while little is expected of Schalke, who haven’t won in their last four Bundesliga matches, they also have nothing to lose. Domenico Tedesco’s side have regained some composure following a dreadful start and their Champions League campaign so far has been the highlight of a season which follows a runners-up finish in the Bundesliga last term. Injuries haven’t helped, but the absences of Breel Embolo and Steven Skrzybski mean City could come up against a familiar face in Rabbi Matondo, who moved to Schalke from City in January after failing to see a pathway through to Guardiola’s first team.

It is another nice narrative alongside the real business of progress for Pep. City are desperate to win the Champions League, a feat Gundogan believes they should have achieved already ‘at least once’, but Guardiola has to balance that desire with the threat of Liverpool in the title race. The second leg against Schalke comes just a few days before the Manchester derby at Old Trafford. Guardiola will be keen to get the job done in Gelsenkirchen so he can prioritise the local threat to City’s Quadruple hopes.

Football League game to watch – Derby v Millwall
The Rams and the Lions return to the nitty-gritty of the Championship after their FA Cup exploits at the weekend, when Derby exited at Brighton, while Millwall pressed home their claim to be the cup’s modern-day great overachievers by reaching their fourth quarter-final in 15 years. That’s one more than Liverpool.

But, immediately after the win at AFC Wimbledon, Neil Harris will have switched his focus back to the precarious position Millwall find themselves in at the foot of the Championship. They currently languish two points and two places above the drop zone, with the trip to Pride Park counting as one of the two games in hand they hold over the teams below them.

Frank Lampard is also looking at a gap of a couple of points, though Derby’s is the difference between seventh, where they currently reside, and the play-offs places. It has been a creditable start to life in management for Lampard but it won’t have escaped the rookie boss’s attention that the Rams have not finished outside the top nine in the Championship since 2013, yet he is the sixth permanent manager in that time. Many of his predecessors have paid for late-season slumps. The visit of Millwall offers Lampard and Derby the chance to ease concerns that the draw at rock-bottom Ipswich and the weekend’s defeat could be the start of another.