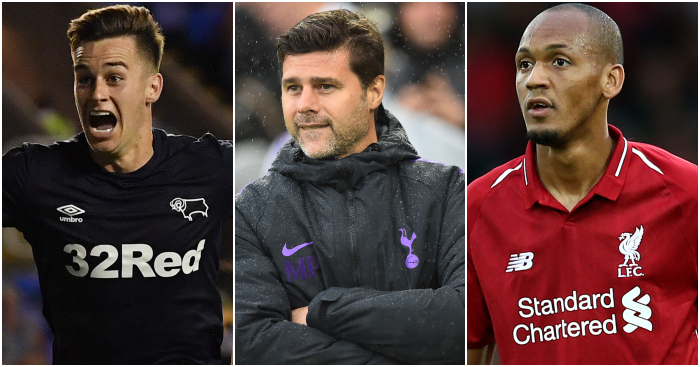 Game to watch – Liverpool v Chelsea
Comfortably the biggest game of the Carabao Cup third round is but a mere warm-up for the main event at the weekend, when Chelsea take their turn to play host as Liverpool carry their 100% record to Stamford Bridge in what could be one of the Premier League’s most pivotal games of the season. But there’s still plenty in this one to grab you by the balls before the big one three days later.

Even if the managers opt to make wholesale changes – which seems sensible in both cases – that is part of the intrigue. In recent years, Liverpool have lacked the depth to be able to rest a swathe of big names without dicing with defeat. Jurgen Klopp has now rectified that and his squad appears well placed to fight on all fronts.

Chelsea can expect to face a radically different side than the XI Klopp appears to have settled upon as his best. In the five Premier League games prior to the weekend win over Southampton, the Reds boss only rotated Naby Keita and Jordan Henderson as the side remained unchanged around whichever central midfielder had been given the nod. Against PSG in the Champions League, Daniel Sturridge came in and did the business, as did Joel Matip and Xherdan Shaqiri when they were given jobs against Saints.

Matip and Shaqiri will likely keep their places and Sturridge will be keen to cement his role in Klopp’s Plan B. Elsewhere, Klopp could change his keeper, both full-backs, his remaining striker, plus give a first start to Fabinho.

Maurizio Sarri had the opportunity to rest his key players for the trip to PAOK in the Europa League but the Chelsea boss opted to name a strong side. You might argue that the Blues paid for that selection with a below-par performance at West Ham where they slipped two points off Liverpool’s pace. Sarri has already pointed out that the Reds have had two days rest more than the Blues so “maybe I will change 11, maybe five”.

Just as it represents more than a run-out to Liverpool’s stand-ins, the same goes for Ruben Loftus-Cheek, Alvaro Morata, Gary Cahill and Callum Hudson-Odoi. Everyone has a point to prove on Wednesday night.

Team to watch – Manchester United
Jose Mourinho quite rightly tore into his players after the draw with Wolves having been out-fought on their own patch. “I can’t explain difference of attitude because I never had a difference of attitude,” said the United boss, but Mourinho may be suffering short-term memory loss because it seems to have happened on a few occasions against teams for whom facing United is “like the World Cup final”.

Last season, United lost three league games against promoted sides in the same campaign for the first time since 1989/90 while also losing to West Brom at home and failing to beat Burnley and Southampton at home. It’s not entirely down to attitude but United’s is too often found wanting, as on the three previous occasions in the Premier League era that Football League opposition have won League Cup ties at Old Trafford.

Mourinho pinned most of the blame on his attacking players and they were wretched in the face of Wolves defiance. Having settled his own rearguard, the United boss can turn the screw on his front six and even though at least half will be different when Derby come to town, Mourinho will be eagerly looking for an improvement in creativity and ruthlessness.

Both were a problem for United against the same opposition earlier this year when the Rams faced the Red Devils in the FA Cup third round. Marcus Rashford, who is suspended this time, was especially wasteful and it wasn’t until Jesse Lingard and Romelu Lukaku were dispatched from the bench that the prospect of a replay was averted. Mourinho expects better…

The England manager shunned Liverpool v PSG in the Champions League last week to watch a goalless draw between Derby and Blackburn, all because of the Chelsea loanee making waves at Pride Park.

Mount will be looking to take his impressive form to Old Trafford on Tuesday night, when Man Utd will have to be wary of the 19-year-old’s creative powers. The attacking midfielder is the Rams’ top scorer having scored his fourth of the season against Brentford on Saturday, while no player in the Championship has created more chances. Mount and Lee Evans have both laid on 21 opportunities for team-mates, but Wigan’s Welshman has had an extra game to match Mount’s output.

Ahead of the upcoming England games in October and November, the opportunity to pit his wits against Man Utd comes at the perfect time for Mount. It could be an uncomfortable evening for Ander Herrera…

“I would like to win the Carabao Cup. But I think it will not change the life of Tottenham.”

That was Pochettino last season, when he discussed winning the ‘two real’, life-altering honours. But since Spurs don’t seem fully equipped to win either the Premier League or the Champions League – not that the manager would admit it – perhaps it wouldn’t hurt to put a bit of thought into the domestic cup competitions?

That isn’t to say Pochettino shouldn’t make changes – of course he bloody should. His first team were talking about being knackered last week and though victory is the best energy boost, it’ll take more than a win at Brighton to fully freshen up his biggest names.

Juan Foyth, Davinson Sanchez, Ben Davies and Serge Aurier can come in at the back while Harry Winks, Victor Wanyama, Moussa Sissoko and Erik Lamela are all likely starters. And Lord knows Fernando Llorente needs minutes.

It will be a strange night as Spurs decamp to Milton Keynes and Pochettino will need to set the tone.

(Potential) Football League game to watch – Harrogate Town v Wrexham
With the League Cup taking precedence, there is only one EFL match taking place and unless you’re at Huish Park for the battle of 10th v 14th in League Two, you won’t be able to see it. So, instead, I’m nipping up to Wetherby Road where I’ll see Wrexham for the first time in 27 (twenty-seven) years.

Then they were taking on Man Utd in the UEFA Cup Winners’ Cup at the Theatre of Dreams. This week they’ll be at Town’s CNG Stadium, home of Harry Gator and the Wellington Burger, as the National League’s third-placed side to take on the team one place above them.

Town have been the National League’s surprise package, beginning their first season at the fifth level with an 11-game unbeaten run and a spell at the top of the table until Leyton Orient usurped them at the weekend. Sam Ricketts’ Wrexham had kept pace before they too were beaten 3-0 at the weekend – their second defeat of the season. It should be a decent game, but I’m in it for the burger.

European game to watch – Leganes v Barcelona
If Mauricio Pellegrino went into the Leganes job aiming to show Southampton what they could have won, it hasn’t worked out that way so far. The Former Liverpool defender’s side sits bottom of La Liga after a draw and four defeats in their opening five games.

For Barca, it should be like shooting in a barrel and the ideal fixture to return to winning ways after they were held to a 2-2 draw in the Catalan derby against Girona on Sunday.

Ernesto Valverde will presumably give the rotation a rest after tinkering at the weekend without seeing the desired results. Clement Lenglet, Arthur and Arturo Vidal were all handed starts but none of the new boys lasted 90 minutes, with Lenglet being sent off int the first half before the other pair were substituted after an hour. Valverde, though, will be able to call on Malcom after the winger’s return from injury.