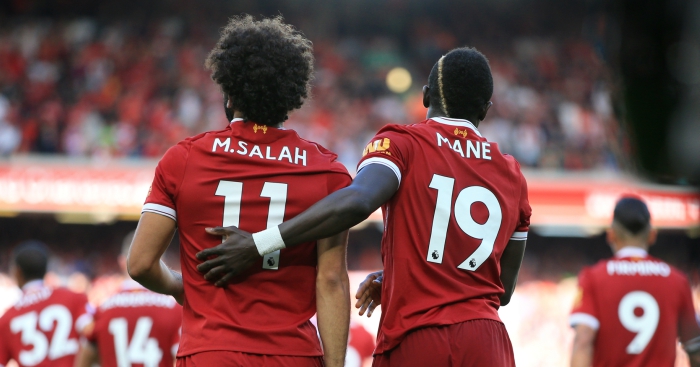 Game to watch – Liverpool v Paris Saint-German
As Champions League curtain-raisers go, you won’t find any clash more intriguing than the one game this week which looks more like a potential final than a Group C opener. Liverpool and PSG have won all five of their league matches before they clash at Anfield, so at least one perfect record has to give. It’s anyone’s guess which…

Their impressive starts are one of the few things these giants have in common. Liverpool, so proud of their history and their five European Cups, face the nouveau-riche Parisians so keen to join their hosts at the top table of the continent’s most prestigious clubs. Jurgen Klopp has his mind primarily on harnessing the unity in his squad to re-establish his club’s domestic power base but PSG, with their star names and individual class having long since conquered France, now have eyes on the rest of Europe as they prepare for their first real test of the season.

Unfortunately for Thomas Tuchel, Liverpool won’t be rolling over to have their tummies tickled by Neymar, Kylian Mbappe and co. Klopp scoffed at Gary Neville’s suggestion last week that the Reds should perhaps prioritise their Premier League campaign over the Champions League but the manager’s flippancy also reaffirmed one truth: Klopp’s side do not know any other way of playing other than full pelt.

It remains to be seen later in the season whether that becomes a weakness and what effect, if any, it has on their title hopes. But luckily for us sat at home expecting to be entertained, Liverpool cannot afford to ease off against PSG, even if they wanted to.

Napoli are the third wheel at Anfield, with Group C rivalling Tottenham, Barcelona and Inter Milan’s pool for this season’s Group of Death tag. In other circumstances, PSG and Liverpool could have played out a draw or even taken a defeat safe in the knowledge that they could make up points against the lower seeds in the group. But Liverpool, as Napoli have furiously pointed out, are those lower seeds. To progress, the big hitters are going to have to take points off each other to avoid being the odd man out in the Europa League for the second half of the campaign.

Team to watch – Arsenal
Arsenal may not be in Champions League action but Unai Emery has suggested that this week is when the Gunners begin their journey back to the competition for which they hold a dubious record: The most games played without ever winning the damned thing.

A Thursday night clash with Vorskla Poltava – fifth in the Ukrainian league, since you ask – probably feels as far from the Champions League as they could get but Emery is ready for the long haul though the Europa League. The new boss said last week that the competition will be one of Arsenal’s priorities, especially in view of the difficulty he might expect in securing a top-four spot in the Premier League.

Until it was the only thing left to fight for last season, Arsenal went through the motions in the Europa League. Arsene Wenger had two distinct XIs – a Premier League team and one for Europe. Emery insists he will be doing things a little different by avoiding much of the usual rotation and when he claims “I have proven with my experience to know the best way to manage the players in the Europa League,” you cannot argue with his record of three consecutive triumphs with Sevilla.

One change he is willing to make is his goalkeeper. To put it nicely, Petr Cech has had a mixed start to the season playing Emery’s way but the veteran stopper so far has fended off the challenge of new recruit Bernd Leno. The meeting with Vorskla will give Arsenal fans their first glimpse of the German and if, as many suspect, the keeper is more comfortable with Emery’s demands, then it surely won’t be long before he becomes a fixture between the Emirates sticks.

Player to watch – Harry Kane
Gareth Southgate suggested his captain needed a breather when he was left on the bench for the friendly against Switzerland last week and it’s hardly like the England boss desperately needed to see Danny Welbeck again; there must be valid concerns.

But neither Kane nor Mauricio Pochettino is willing to accept that the Tottenham striker is running on empty. His performances suggest otherwise, however, as does a record of two goals in seven appearances for club and country. Against Liverpool on Saturday, he had only 19 touches that weren’t kick-offs, and though Tottenham collectively weren’t at the races, Kane looked especially lame.

Pochettino scoffed at the suggestion that he might rest Kane when Spurs travel to Inter Milan on Tuesday evening. “I think we would be crazy,” said the Spurs boss, perhaps knowing all too well that the alternative is Fernando Llorente. Pochettino gave Kane and all his players who went to the final weekend of the World Cup three full weeks off before returning to work five days before the start of the season, but of those nine players, only Jan Vertonghen has kept pace with Kane’s level of activity.

Alan Shearer suggested that Kane’s problems pre-date the World Cup and though he was reluctant to take anything away from the Golden Boot winner’s achievement, he did so anyway. But the ex-England No.9 may well have a point about the current one. His performances haven’t been up to scratch since his ankle injury in March and when the goals aren’t flowing, the scrutiny inevitably increases.

Inter boss Luciano Spalletti managed to stifle the giggles on Monday when he told his press conference that Kane “seems to be in excellent shape”. For different reasons, Spalletti is repeating the same half-truths as Kane and Pochettino. The only way the speculation will subside is with an impressive performance and a tangible impact at the San Siro.

Manager to watch – Jose Mourinho
Despite Manchester United winning their last two games, Mourinho will be chuffed to be starting the Champions League season against Group H minnows Young Boys, rather than facing Valencia or even more dauntingly, Juventus and Cristiano Ronaldo. The Serie A side and the return of the prodigal son is to come but Mourinho at least has some time to build up a head of steam before the double header with the Italians on matchdays three and four in November.

Many didn’t foresee Mourinho remaining in his post until then but, if anything, recent weeks have seen the manager solidify his position. Wins over Burnley and Watford helped but Mourinho has created something more like the siege mentality that he based many of his former glories upon. Despite Paul Pogba’s posturing and Ed Woodward’s best efforts to undermine him, United fans have voiced their approval for the manager louder than at any point this year.

But still, as the reaction to his latest perceived ‘meltdown’ showed last week, when he corrected a few myths surrounding Marcus Rashford, it will take more than six points earned at Turf Moor and Vicarage Road to convince many of the doubters that he remains the man for the job.

In times of trouble, Mourinho inevitably turns to Marouane Fellaini. The Belgian has been one of the standout performers in United’s recent improvement but can the manager do without his crutch in Switzerland, where United will be expected to be firmly on the front foot?

One-v-one battle to watch – Trent Alexander-Arnold v Kylian Mbappe
For Liverpool’s remodelled rearguard, PSG offer a taste of what opposition defences must feel upon facing Salah, Firmino and Mane. The potential in Mbappe, Neymar and Edinson Cavani is perhaps even greater than the sum of the Reds’ attacking parts but unlike Klopp, Tuchel has yet to fathom which shape suits his new team best. The only thing the German boss is certain of: “I want to find a position for all the players.”

It seems most likely that Tuchel will pit his 19-year-old Golden Boy nominee against Klopp’s. With Neymar set to take a free role, Mbappe will probably be found thundering through the inside left channel, putting him in direct competition with Alexander-Arnold.

After shackling Cristiano Ronaldo in his last Champions League outing, it would have been unthinkable to suggest that his next European assignment could be even tougher. Mbappe seems to have carried his World Cup form into his club performances, having scored four goals and assisted another in two-and-a-half Ligue 1 matches.

However impressive he was in the Champions League final, Alexander-Arnold will need a hand. Or two. The right-back will inevitably stay closer to Joe Gomez inside him, while Roberto Firmino, if fit, will most likely not be allowed to hang out near the halfway line – as he did at Wembley on Saturday, just waiting to receive the ball once Danny Rose had been caught upfield once again.

Alexander-Arnold’s more recent performances have made his nightmare showings against Marcus Rashford and Wilf Zaha earlier this year nothing but a distant memory. But Mbappe could have the Liverpool youngster suffering ‘Nam-style flashbacks if his standards slip even slightly.

Football League game to watch – Stoke v Swansea
If for some reason Salah, Neymar, Firmino, Mbappe and co don’t float your boat, then Sky Sports is the place for you on Tuesday evening…

The Bet365 Stadium plays host to two sides relegated from the Premier League last season who are experiencing vastly differing fortunes as they look to climb back up. Swansea, under Graham Potter, have enjoyed an encouraging start to their new era, with seven points from nine gained on the road helping them to claim a top-six spot.

In contrast, Stoke have had a nightmare. Gary Rowett was expected to lead a promotion charge but seven games in, the Potters are fifth from bottom, one point above the relegation zone. They would have been in the bottom three had they not taken a point at Sheffield Wednesday on Saturday but even that draw was clutched from the jaws of victory. Stoke led 2-0 inside the opening quarter at Hillsborough before surrendering what would have been only their second win of the campaign.

There is some encouragement for Rowett to clingto. Stoke have won their last two at home while keeping a couple of clean sheets and they could benefit from the fact Swansea are running out of midfielders.